Car launches are carefully managed events that show off a vehicle’s best qualities. While they do usually take place in spectacular locations, the emphasis is nearly always on the car, with little thought given to the travel experience.

But for the launch of the new Everest, Ford managed to blend the best of both worlds into one heck of an experience in Botswana.

The journey began with a flight to Maun, the go-to jump-off point for many a traveller heading into the Okavango Delta. We’d be spending two nights exploring the highlights of the region, all from the comfort of Ford’s plush new bi-turbo Everest.

The first chapter of our journey took us some 200km along the A3 road, towards one of Mother Nature’s more surreal works of art – the Makgadikgadi Pans.

We’d be spending the night bathing in the starlight in a remote corner of the Nwetwe Pan, to be precise.

Our campsite was ready and waiting, with a canvas tents pitched in a large circle. A vital mopani wood fire burned right in the middle. 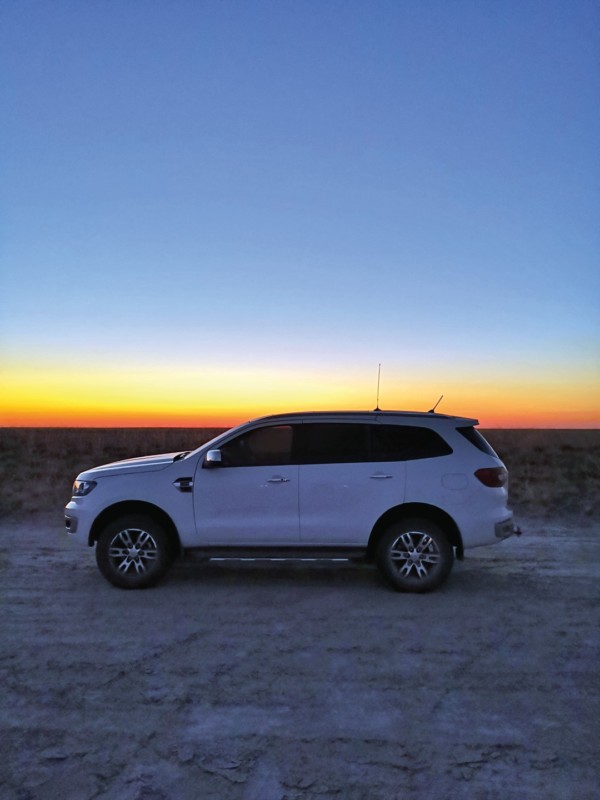 We arrived with light fading fast, so there was just enough time to grab a drink and take in the pastel-coloured sunset. On one side, the sun was setting over the veld and on the other, blue and red colours were mixing above an endless horizon of salt pan. 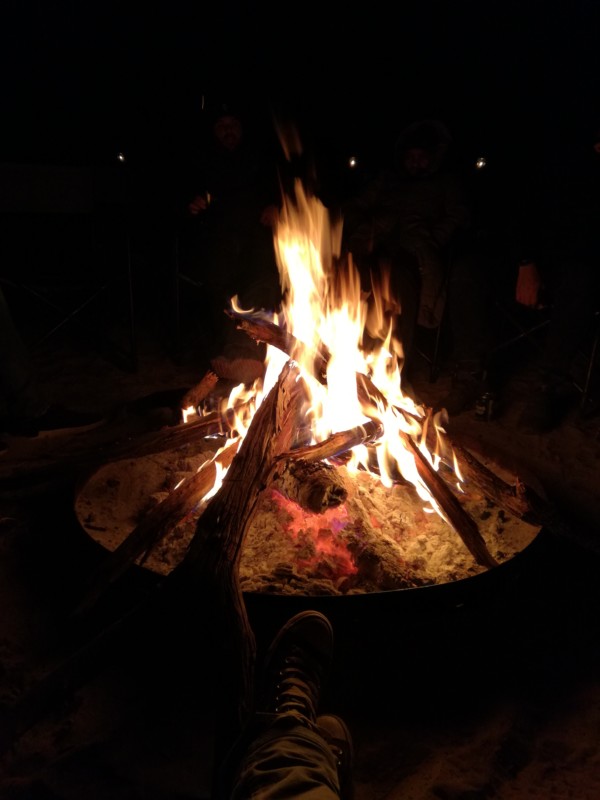 The Ford team had intended for us to stay further out into the pan, but the SAMIL support vehicle – hauling much of the camping gear – nearly got stuck in the primordial ooze under the brittle surface of the pan.

Personally, I think the setting was perfect.

Although the night was bitterly cold, the catering team did a fine job of warming us up with some tasty chicken and some oxtail stew.

Day two gave us plenty of time to get a proper feel for the new Everest, as we headed back through Maun and onward to the southern reaches of the Okavango Delta.

Our biggest challenge, when entering Moremi Game Reserve, came in the form of fesh fesh – fine, powdery sand that creates massive dust clouds that linger longer than anything you’ve ever seen.

In Sand Mode, the Everest conquered the deep sand ruts, but a safe following distance was vital, especially when visibility reached zero. 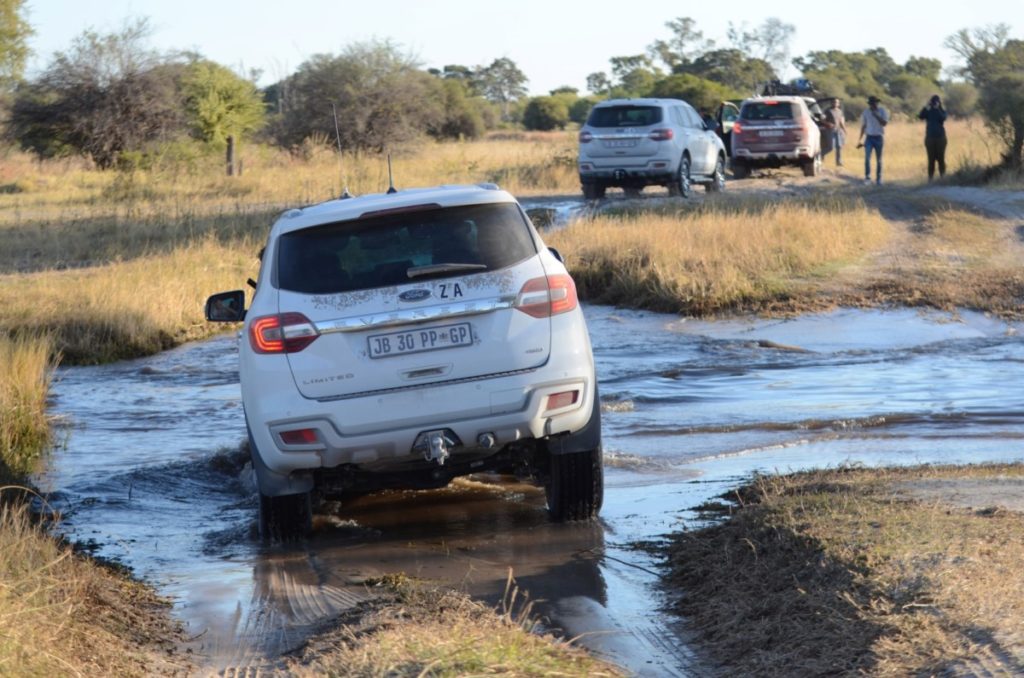 With the dust bath behind us, we trundled into the Khwai Development Trust, a community empowerment-driven concession centered around a San village on the banks of the Khwai River. 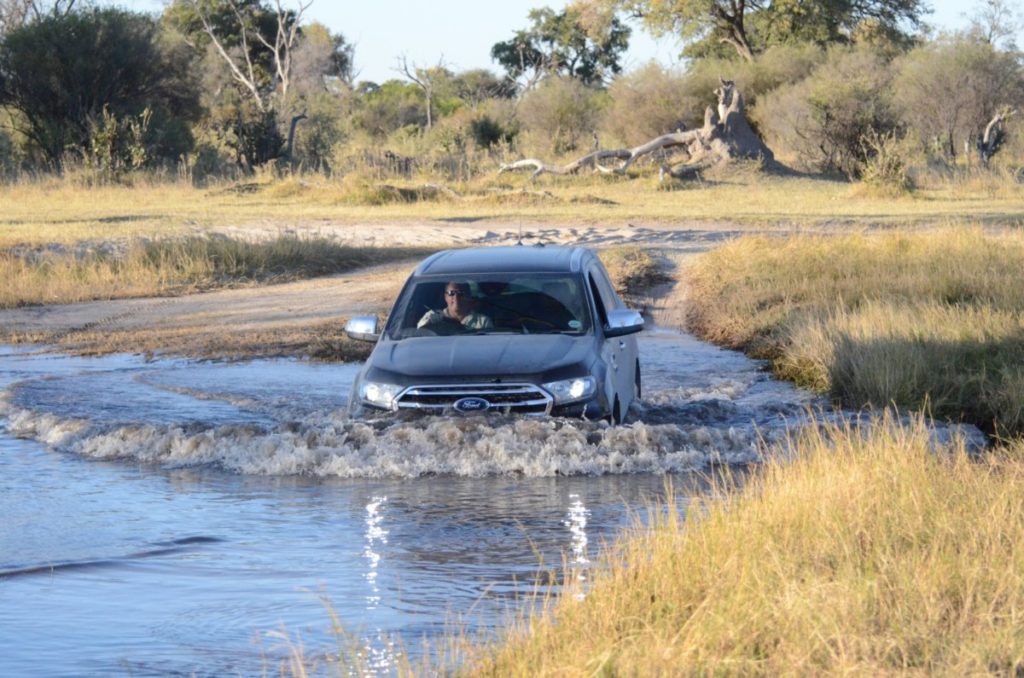 We were in proper Big Five country now, but despite plenty of impalas trotting about, the predators were particularly shy. Elephants, however, were out and about in droves, creating just as many roadblocks as photo-ops.

Our lodging was superb; we’d each be spending the night in our own safari tents, but not before we were treated to another superb bush dinner and essential campfire. 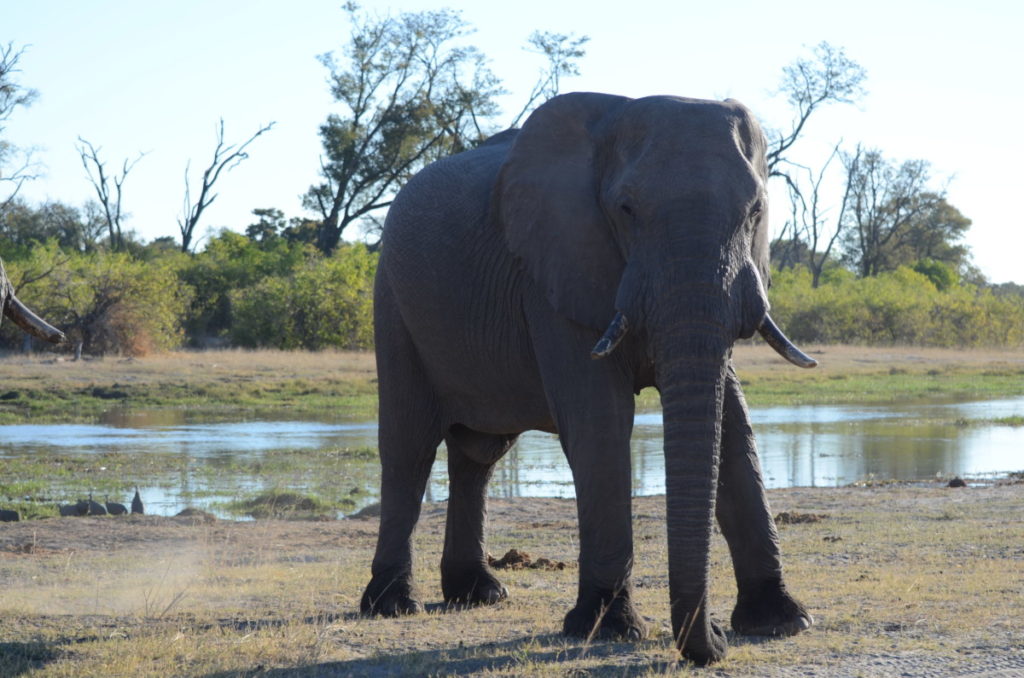 We were also warned, in no uncertain terms, that the camp is unfenced and open to all wildlife. Staff and visitors often have to share the space with hungry elephants, scavenging hyenas, and a resident male leopard who stalks the riverbank.

While unpacking our luggage, a couple of us had an eerie encounter with a rather large bull elephant. He had been watching us very quietly from the darkness. Our torches allowed us to discover that he was standing not even 10m away from us!

Rolling on the river

Ford had one more surprise in store for us before we headed back to Maun – a classic mokoro cruise into a section of the delta, which ended with us finding a well-weathered elephant corpse that had been stripped to the bone. Our guides assured us that the young male had died from natural causes, and although it was sad to see it was also a reminder that life in the wild is tough. 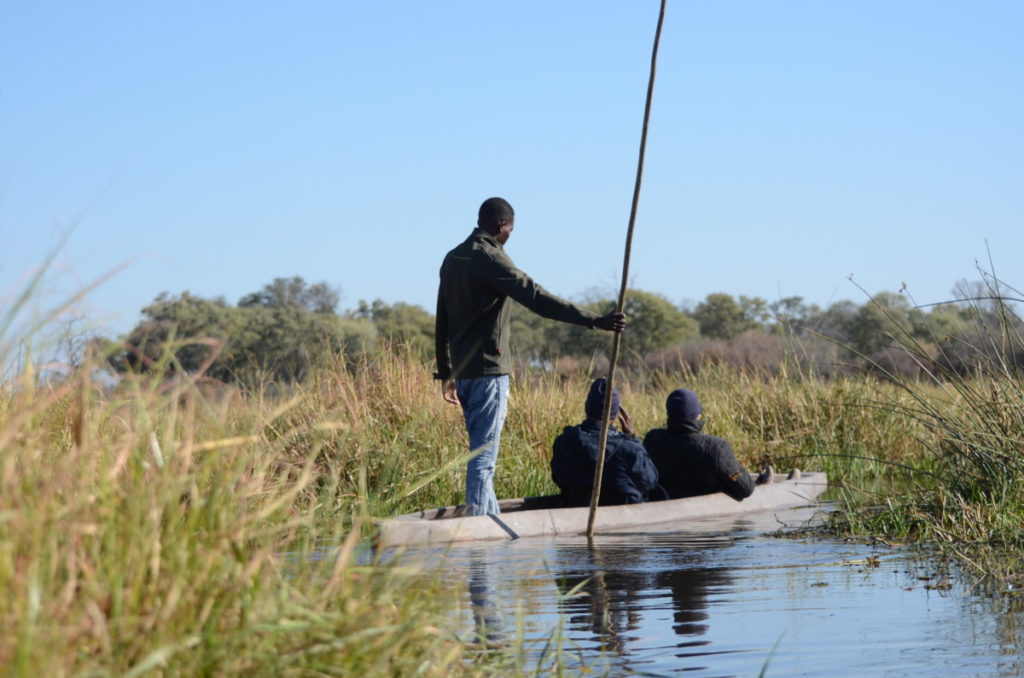 After cruising back to shore, we enjoyed our final few moments in the Everests before hopping on board three chartered planes at the Khwai airstrip, ready to get back to Maun in time for our flights back home. 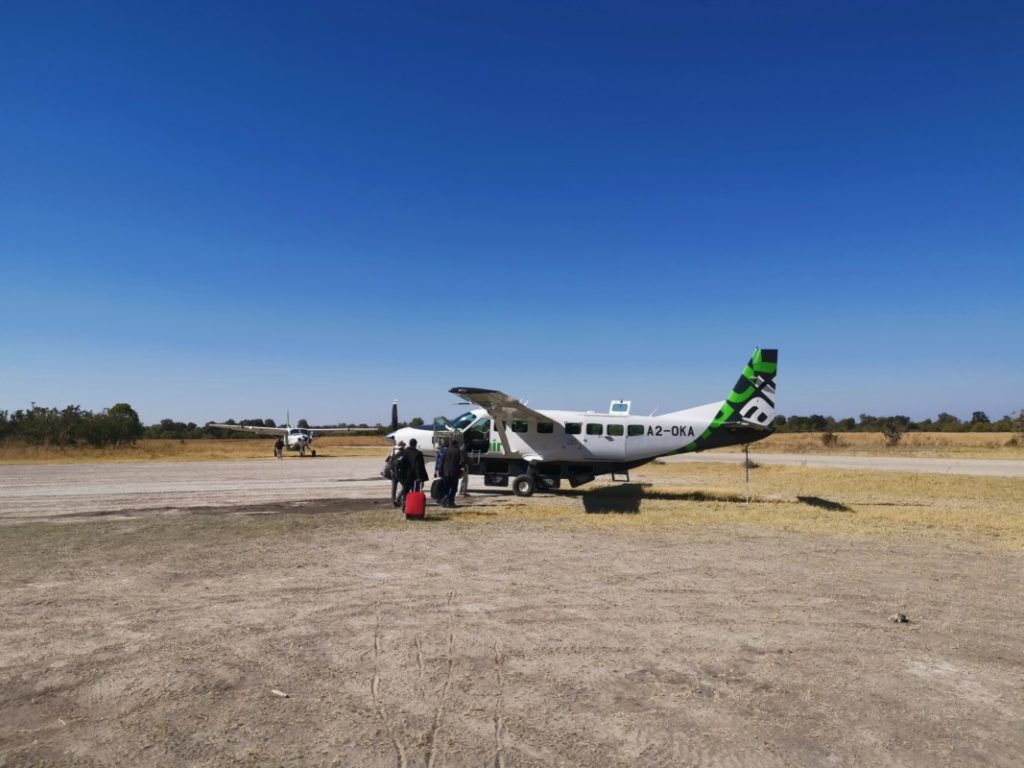 Somehow, in just two and a half days, we’d seen Botswana from road, river, and air. Not bad for a car launch! Speaking of which…

On the surface, it may seem that little has changed with Ford’s seven-seater body-on-frame SUV, but the manufacturer has gone a long way to improve a winning formula.

The biggest change comes in the form of the new drivetrain options, namely the 2.0-litre Bi-Turbo and single-turbo engines already seen in the new Ford Ranger. They’re mated to Ford’s sublime 10-speed automatic transmission, which Ford claims boosts both efficiency and performance.

Ford has kept one 2.2-litre Duratorq TDCi engine in the lineup, as well as a single 3.2-litre variant, available exclusively in a 6AT 4×4 setup.

Dale Reid, Product Marketing Manager at Ford SA, explains: “We decided to keep it in there for those customers who think they need extra power for towing. It is, however, a misconception that you need the bigger drivetrain to tow. This new vehicle, single or bi-turbo, can tow the same, but you’ll get better efficiency.

The Everest has a maximum towing capacity of 3 000kg on single-turbo derivatives, while the bi-turbo is rated at 3 100kg. 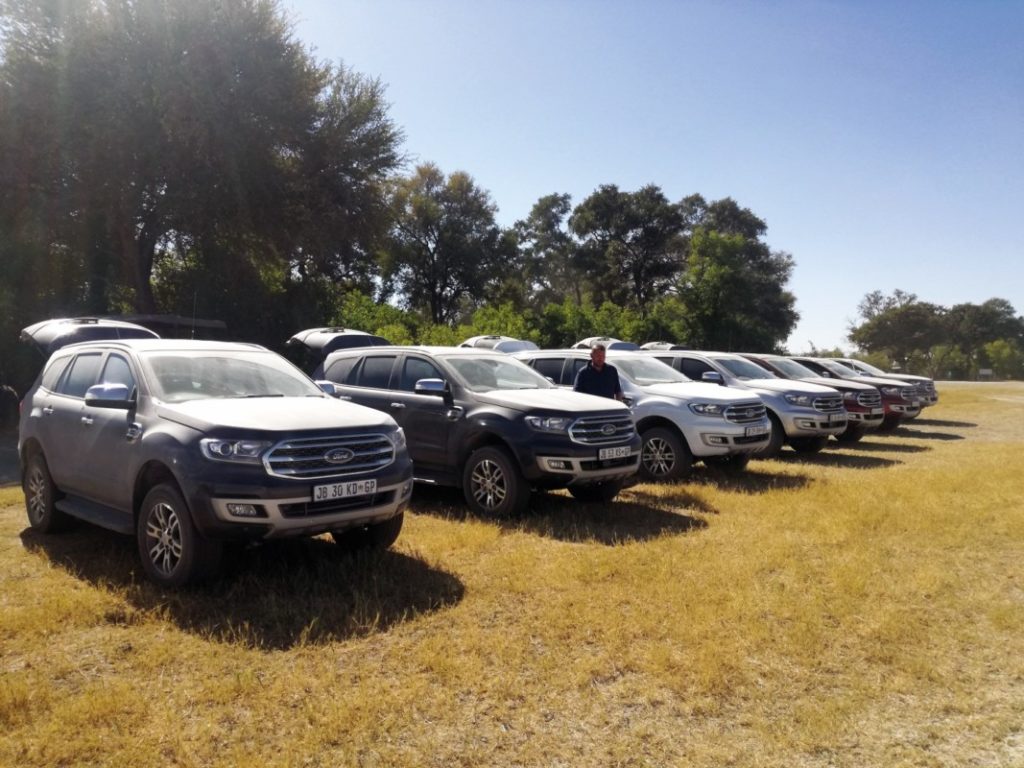 The 2.0-litre single turbo engine delivers 132kW and 420Nm, while the Bi-Turbo pumps out 157kW and 500Nm. It’s a proper 4×4-capable package, with 225mm of ground clearance, an approach angle of 29.5 degrees, departure angle of 25 degrees, ramp breakover angle of 21.5 degrees and a wading depth of 800mm. Needless to say, we tested the latter to the max on some of our river crossings in the Khwai.

Like the new Ranger, ride changes include improved comfort, thanks to a redesign of the front suspension.  “The engineers rerouted the front anti-roll bar from in front of the axle to a position below the engine,” says Ford SA’s Managing Director, Neale Hill. The new bar is thicker and stiffer to beef up stability, which meant less firm springs could be installed. This results in what Hill calls a “plusher” ride, complemented by three different damper setting options, a reworked jounce bumper, and lower standard tyre pressures (from 2.4 to 2.1kPa), as seen on the Ranger.

Other minor changes to the Everest line-up include a slightly altered front bumper, a retouched grille, 20-inch wheels on the Limited model, and a new paint colour option – ‘Diffused Silver’. 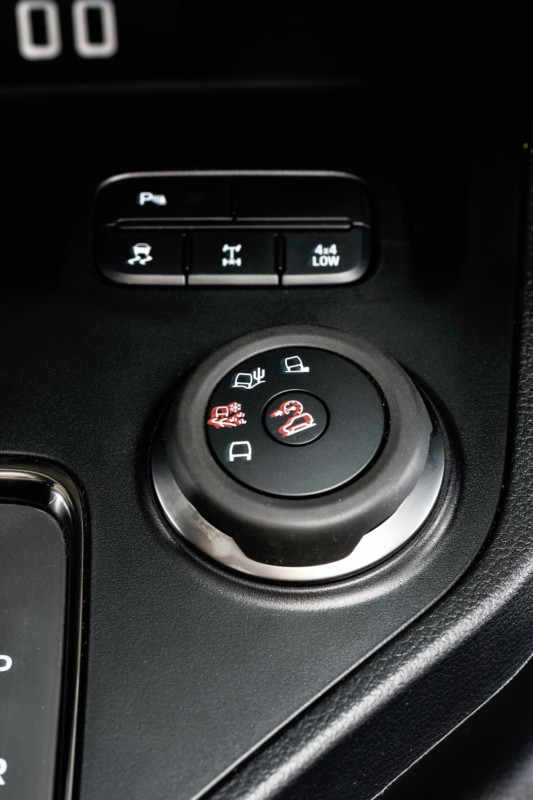 Most serious 4×4 enthusiasts will be drawn to the most practical 2.0 Bi-Turbo XLT derivative, which boasts 18-inch wheels – but still includes luxuries such as Ford’s SYNC 3 infotainment system, Passive Entry and Passive Start, as well as daytime running lights.