What a blast! If you are a fan of spirited off-road driving, there is much to like about Ford’s just-released Ranger Raptor.

The Raptor has been elevated to a performance class of its own by the Aussie engineers who did the development work, and it’s the closest we are likely to get to the iconic Stateside F150 Raptor.

I can’t think of any other locally-available production four-wheel-drive vehicle that offers this kind of poise and balance at the price. For a load-carrying bakkie, rated slightly lower than a standard Ranger, to carry 607kg and tow 2500kg, its ride quality and ability to soak up both the big hits and stuttering corrugations is hard to believe.

Launched to the media at Goera Pan outside Upington, where the Dakar racing off-roaders do some of their shake-down testing, we put it through its paces on both churned-up red sand-dune routes and on hard-packed, rutted gravel, where a few humps had the Raptor delivering plenty of air. Our adrenaline-infused efforts on the so-called ‘rally’ route were put into perspective by a few hot laps as passenger with Lance Woolridge, a Class T champion in the SA Cross Country Series, whose left-foot braking and vastly superior off-roading skills shaved quite a few minutes off our paltry efforts. That he did repeated hot laps in a number of the Raptors, in blazing hot conditions, speaks volumes for the durability of the vehicle.

It’s hard not to rave a bit, because for an extra R100k over the new Ranger Wildtrak bi-turbo (which is pretty accomplished in its own right), there is a fairly radical step-up in off-road performance.  It’s a complete package, with every significant element – visual, functional and mechanical – tweaked with apparently one focused goal in mind: hoonability! 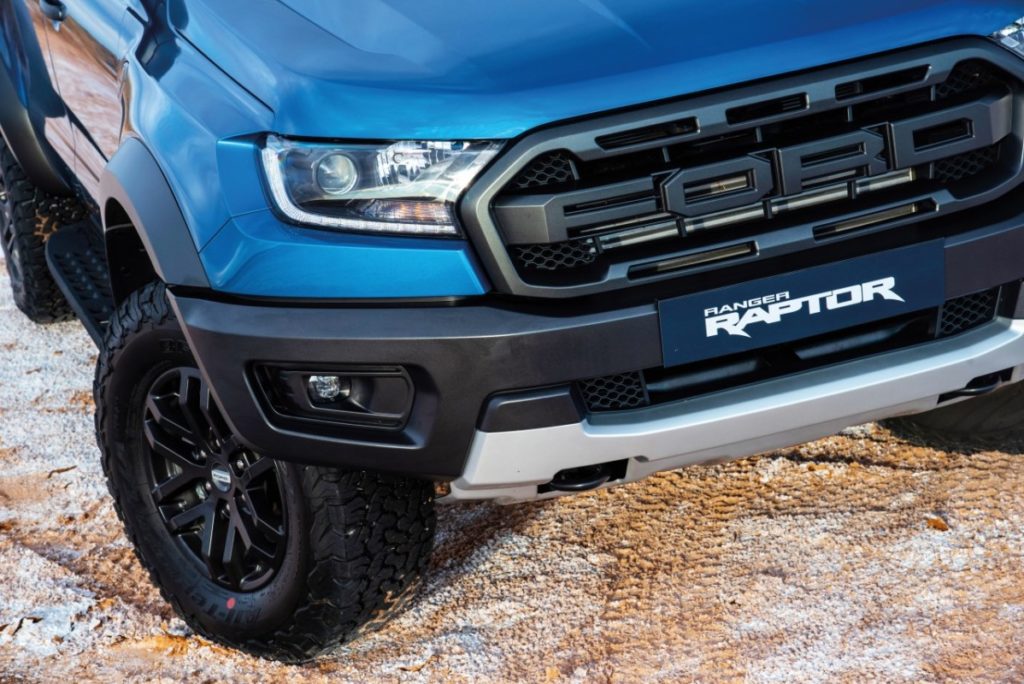 External cues are not subtle. Apart from the gaping grille and Raptor vinyl kit on the load body, the 150mm wider track (to 1710mm) and longer wheel-travel translates upwards to wide and aggressive wheel arches. It stands 51mm higher than a standard Ranger, offering 283mm of ground clearance, with the added benefits of a much thicker bash plate and a pair of beefy recovery hooks front and rear. The towbar has been tucked further upwards into the chassis, much improving the departure angle to 24 degrees, and the approach angle is a decent 32.5 degrees. Adding both form and function is a set of trick cast-aluminium side steps/rock sliders, a neat foil to the blacked-out rims and a set of 285/70 R17 BF Goodrich KO2 all-terrain tyres, developed specifically for the Raptor’s high-speed needs.

The interior is largely familiar, apart from the addition of deeper-bolstered front seats shod with suede trim which are grippier, along with blue-detail stitching, a red cast to the driver’s instrument cluster, and some tweaks to the SYNC3 infotainment system − notably the addition of a breadcrumb feature.

That’s the visual package. What really elevates the Raptor’s ride and handling profile is a series of major chassis and suspension changes. None of these things come along with the typical bolt-on Raptor kit… 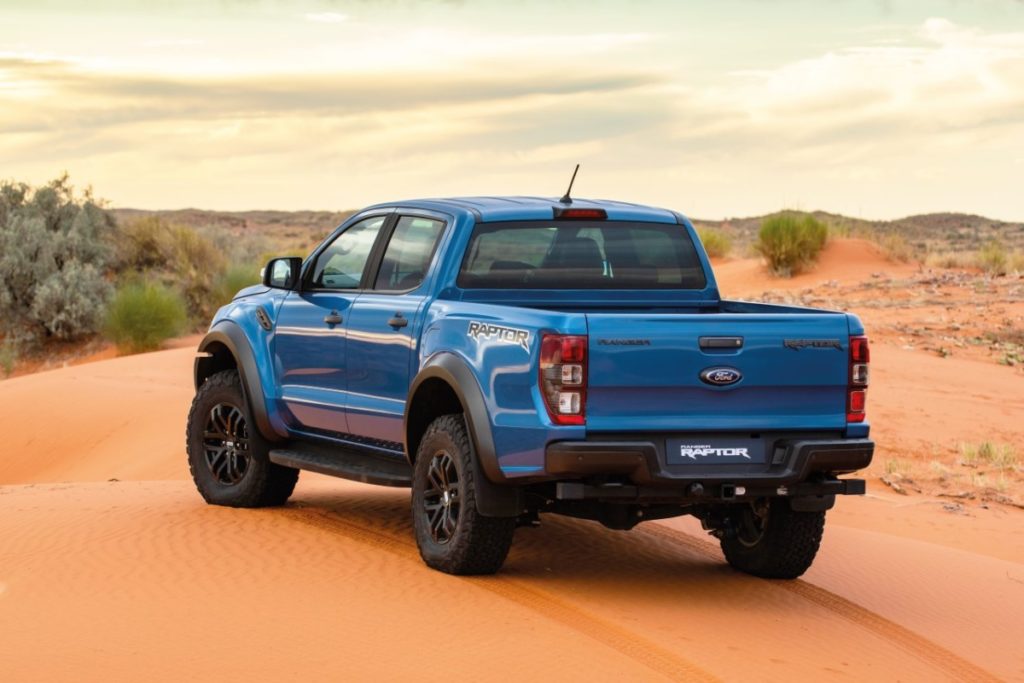 At the front, longer cast-aluminium control arms give 32% more wheel travel. Out back is a solid axle and Watt’s Link set-up, borrowed in part from the Everest, and offering good lateral stability and up to 22% more travel than the standard leaf springs. These changes are allied with chassis adaptations: special steels for stiffer side rails and new, stronger, mounting points for the altered suspension hardware, which includes coilovers all round. The damping magic is down to the Fox Racing Shox, which would cost the man in the street R25 000 per corner. They’re wide (2.5-inch) with oil  reservoirs for fade-free performance, and position-sensitive, which means low-speed bumps are soaked up softly, but things firm up progressively as the hits get bigger – which equals more control when things get extreme.

The engineers also dialled in better stopping, with bigger twin-piston front callipers, and 332 x 32mm vented discs up front and 332 x 24mm discs at the rear; plus, for the first time, a separate master cylinder and booster for the rear braking system. 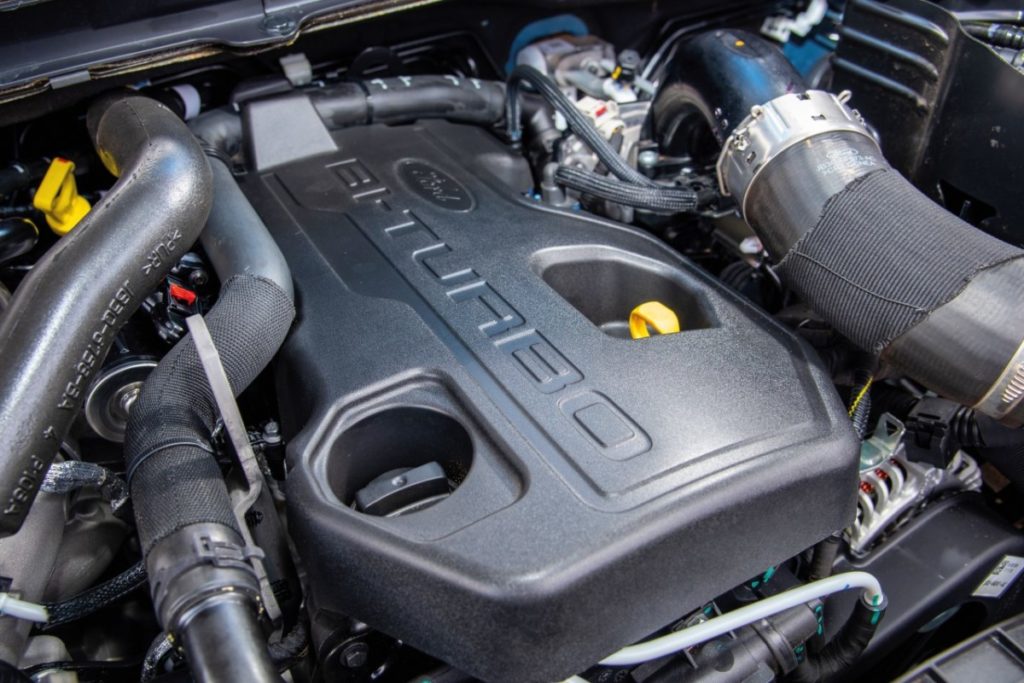 At the core of it all is Ford’s potent new 2.0-litre bi-turbo diesel four-pot, which cranks out 157kW/500Nm with a crisp, lag-free surge. It’s not quite the voema that a petrol V8 would deliver, but when you aren’t mashing the throttle, the better fuel index (theoretical 8.3l/100km) will be wallet-pleasing, compared to the 11+ expected from Ford’s five-cylinder 3.2-litre diesel.

That linear power blast is partly due to being coupled to the latest 10-speed auto box (which also does duty in the Mustang). It has a massive ratio spread from 4.696:1 in first, to 0.636 in tenth, and clever algorithms to alter shift patterns to suit your driving mood − plus, in the case of the Raptor, a set of paddle-shifts to enable gears to be held where you want them. 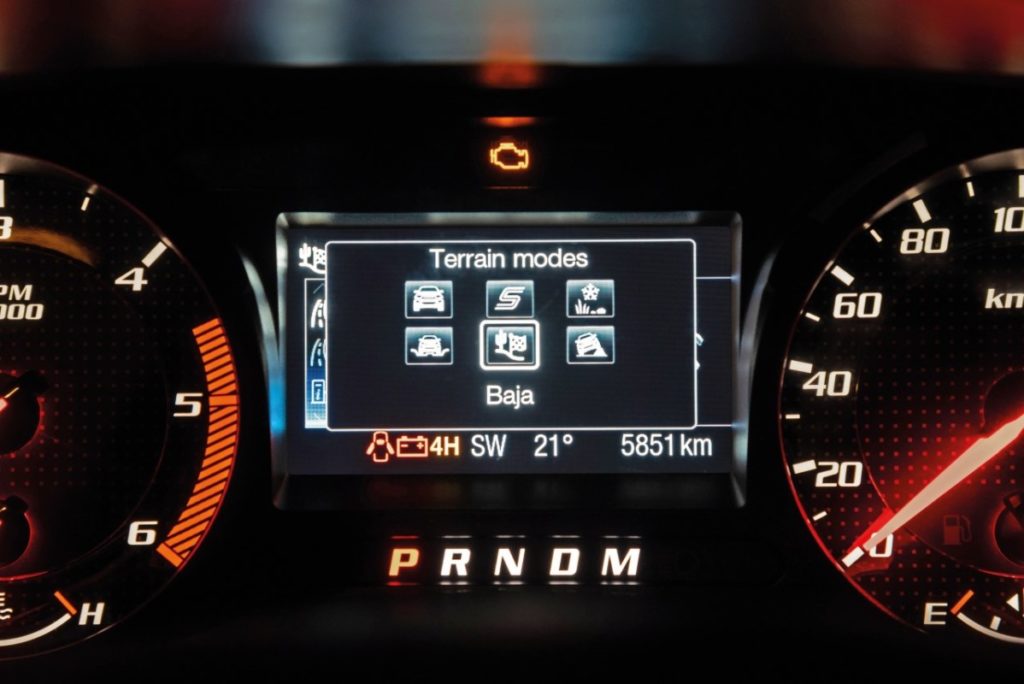 Like the Everest, the Raptor benefits from Ford’s Terrain Management System (which offers Normal, Sport, Grass/Gravel/Snow, Mud/Sand and Rock modes), but adds the so-called Baja Mode in which there is less interference from the traction control and sharper transmission shift points.

It is hard not to be impressed with this halo product from Ford. It is packed with off-roading kit that seriously enhances its ability. Better ground-clearance, tougher tyres, and more protection are just the start. The wider track, extended wheel-travel and trick Fox dampers give superb balance and improved stability, plus superior traction, no matter what you throw it at. And pushing those boundaries, I guess, is what owners will do… a lot.