Wildlife vets are the unsung heroes of modern conservation. What seemed impossible years ago has now become common practice in the game-capture industry. Half a century ago, it would have been unheard of to move whole families of elephants thousands of kilometres by road or to fly rhino halfway around the world in cargo planes.

The advancement of modern tranquilisers has meant that wildlife vets can keep animals under sedation for extended periods of time. State veterinarians also play a very important part in controlling the spread of diseases, and in most countries there are very strict veterinary laws that must be adhered to. In South Africa there has been strict control in the eastern part of the country, where foot and mouth disease is prevalent and where more recently Bovine Tuberculosis has been detected in a range of animals including white rhino – which means that there is a moratorium on movement of all wildlife that could possibly be affected. Constant research is being done to find vaccines that can counter the spread of these diseases. Other diseases like rabies, feline aids and anthrax are all endemic to the system, and the vets need to be very vigilant and proactive in dealing with outbreaks.

I have had the pleasure of working with wildlife veterinarians all over Africa, and some of my fondest memories are of learning from these professionals. When I starting working in the Kruger National Park in 1987 doing the practical year for my Conservation Diploma, Dr Cobus Raath had also started working in Skukuza and we ended up working very closely on numerous wildlife-capture operations. All the capture of lions in our study area between Lower Sabie and Crocodile Bridge was done with Cobus. We needed to identify all the different lion prides in the study area, so, apart from putting tracking collars on select individuals, we also marked the rest of the adults with a brand marking. This may sound cruel, but it was only the hair that was burnt off and after a while the area looked just like a scratch picked up in a feeding scrap around a carcass. We would do this on either the shoulder or rump area, which would give us a broad range of options using a V or a C marking set at different angles. 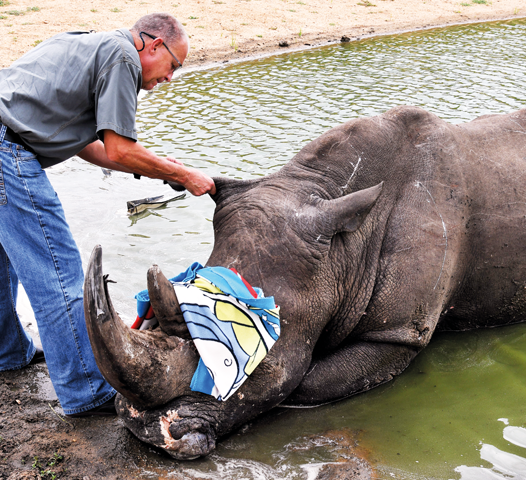 In the study area, there was a coalition of four big male lions that had moved in and taken over the territory. We needed to mark them all so that they could be recognised when they moved around the study area. We set up a calling station with a caravan near a zebra carcass, and waited. Because it was still light, we drove to where we had seen the four big male lions earlier and managed to dart one of them from the back of the Land Rover. We loaded him onto the back of the vehicle (with some difficulty as he was so heavy) and later laid him down in the bush behind the caravan. After dark, we started playing a tape with feeding sounds and it was not long before the other three big bruisers rushed in and started devouring the carcass.

The carcass was chained to a tree with thorn branches packed behind, so they had to feed on the open side facing the caravan open window where Cobus was ready with the dart gun. His first shot hit the first male squarely in the rump and (apart from a feeble growl) the lion did not budge. Cobus then proceeded to dart the rest of them without any running away. I think that in the feeding frenzy they were unaware of these pin pricks. It was rather comical to watch the lion that was first darted starting to feel the effects of the drug: he basically fell asleep next to his brothers. The others continued feeding, until they too fell asleep and we were able to work on all the lions, including the male that we had left sleeping next to the Land Rover. While walking towards this lion to retrieve him and bring him closer to the rest, I almost bumped into a lioness that was coming to investigate the commotion. Fortunately, she only growled then bolted into the night.

These were very impressive lions and, after taking measurements and blood samples, we marked all of them with a C-shape on their rumps. This male coalition was now fondly known as the C-Males and they continued to rule the study area with impunity.

Dr Cobus Raath and I worked very closely on other game capture operations in the Kruger National Park over the next couple of years, when he’d become head of the gamecapture department. In 2016, I saw him again in the Timbavati Private Nature Reserve when we replaced the collar of one of the big elephant bulls. This bull was named “Classic” and it was also a classic moment to see Cobus again after many years, doing what he does best out in the bush.

I was sitting on a sandstone koppie in the north of the Kruger National Park while leading a Wilderness Walking Trail at Nyalaland in the late 1990s when I was asked about the possibility of working in the Kruger National Park by Markus Hofmeyr, who was still studying veterinary science at Onderstepoort. My advice to him was to be persistent. Dr Hofmeyr did eventually join SANParks in later years, and is based at Skukuza in the KNP where he is head veterinarian.

For Markus, and people with his professional remit, it is gratifying to know that you are helping in some cases to save animals from extinction. Despite the pressures of keeping a multi-faceted game-capture team operational and dealing with internal politics, Markus has days filled with adventure that most of us can only dream about. Working at such close quarters with wild animals also brings risks, and his conversations around a braai are enough to make your hair stand on end. Wildlife vets obviously have angels that work overtime!

Working with the big wild animals is a challenge, but some of the smaller creatures need a more delicate touch and the absolute dedication and expertise of a good smallmammal wildlife vet. Dr Bruce Stevens belongs to this special breed of people. While I was working with the Cape Leopard Trust, he often assisted with the darting and care of the animals that had been caught. He was very active in Namaqualand where there was a long-term study on leopards and other mesopredators such as blackbacked jackal and caracal. Most of this work was done pro-bono; without this kind of help, many of the research projects would be hamstrung.

Bruce was very instrumental in helping the Urban Caracal Project that took place in the Table Mountain National Park and surrounding urban areas in Cape Town. He was present and assisted at most of the caracal captures on the Peninsula. I was with him in the Noordhoek wetland area when a female caracal called Fire Lily was caught and had a satellite collar fitted. She was given this name after the devastating fires that swept through the area in 2015. 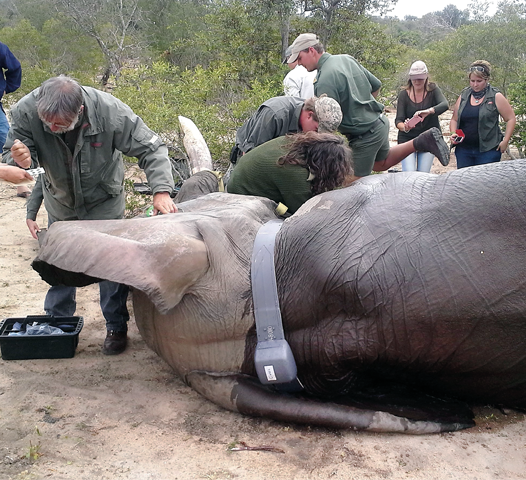 After the collar had been fitted, and all the measurements and blood samples taken, Fire Lily was given the antidote to the tranquiliser. During the ensuing months, the data collected from her movements was nothing short of amazing. Her territory was almost exclusively in the wetland area where she caught game birds, mainly, but she also had forays to the tidal pools on Noordhoek Beach where she caught shore-feeding birds such as the Black Oystercatcher.

The private nature reserves on the western boundary of the Kruger National Park make use of numerous wildlife vets. With the poaching onslaught on rhino, these wildlife vets are often called in to assist rhinos that have been shot and wounded or to capture small calves that have been orphaned as a result of their mothers being poached for their horns.

Vets like Dr Peter Rogers and Dr Bossie Boshoff have a wealth of experience and have assisted in numerous operations, in which they are often faced with the horrible task of having to decide the fate of an individual animal. Everything possible is done to save an animal’s life, although sometimes euthanising an animal is the merciful option. When animals are wounded in natural fights with others of their species, the policy is to let nature take its course.

When there is the strong possibility that an animal has been shot, any injured rhino is examined by a veterinarian to rule out possible foul play. Both Peter and Bossie have played a pivotal part in saving animals in the Associated Private Nature Reserves adjoining the Kruger National Park, and one can call on them at any time of the night or day.

These fine men and women play an important part in maintaining the health of wildlife in protected areas, not only by helping to push back the boundaries of wildlife medicine, but also through their unselfish, unbridled passion for their work.