How often have we heard the phrase, “If it pays, it stays?” No longer do we have the luxury of the “Out of Africa” type of existence that was so popular in colonial times when wide open spaces were synonymous with vast herds of wildlife that roamed across the plains. Back then, the term “Big Five” was coined by all the hunters coming to the African continent to hunt and take back trophies.

Africa is now more often regarded as a continent synonymous with corruption and unsustainable exploitation, which has had a devastating effect on certain wildlife populations and a negative knock-on effect for the communities who should benefit from their presence. If wildlife has a value and is bringing in hard currency, this is a motivating factor for communities and authorities to conserve them. There is no reason to preserve it as a resource if wildlife is perceived to have no value, and is causing damage to crops and livelihoods – perhaps even threatening people’s lives. In fact, ways will be actively sought to decimate wildlife if it has value only when sold on the black market as ivory, rhino horn or bush meat.

In some remote areas in Africa, hunting is practised in a balanced and sustainable way, and the spin-off is that the communities in and around these hunting regions benefit in practical ways. These range from getting the meat, to having clinics and schools built from the proceeds. Many of the community-run conservancies would not be viable if it were not for the use of its wildlife in the form of hunting. Many of the areas are so remote that it is not viable or practical to have nonconsumption activities – such as photographic safaris – because of the logistics and costs.

The very nature of lodges that Vulnerable species. Many of the big game species are in danger of extinction in many regions of Africa, a result of the deadly combination of the illegal world trade in body parts and the march of destructive agricultural practices. “If wildlife has a value and is bringing in hard currency, this is a motivating factor for communities and authorities to conserve them” run photographic safaris means that they can have a much larger ecological footprint that their hunting safari counterparts, but the danger is that the desire to make more money can lead to their bending the rules: more vehicles, indiscriminate off-road driving, harassing of wildlife during un-coordinated vehicle sightings, and so on. This is obviously the exception, and where there are strict protocols in place, the impact can be kept to a minimum.

Hunting safari outfits and their carefully-selected clients often relish the challenge of hunting in these areas off the beaten track because of the longer duration, and the clients’ willingness to rough it and enjoy the challenge of being pitted against the African wilderness. It has been well documented that in certain areas where hunting previously was allowed and then stopped, the result was an increase in poaching and a loss of biodiversity.

When trying to counter this result, there is a danger of zooming in to a very fine scale: perhaps focusing only on a single species in isolation and trying to implement measures that can be very restrictive and damaging to the very animal that needs protection.

The fact is that the influence of man and the exploitation of Africa’s natural resources is what causes the most harm. Large tracts of previously biodiverse land are being turned into wasteland for short-term agricultural gains, and there is wide-scale devastation in the form of deforestation and desertification, often as a result of slash-and-burn agricultural techniques.

Clearly this flies in the face of “sustainable utilisation”. Equally clearly, there needs to be more focus on a landscape level, where all the components of the ecosystems are looked at as a collective, not in isolation. As an example of sustainable use, there are prime conservation areas where non-consumptive (photographic safaris) and consumptive (hunting safaris) operate side by side in harmony. This utilisation model is guided by strict scientifically-based research, and conservation principles that are applied through adaptive management.

The conservation fraternity has many super-passionate people that become involved for different reasons, and the hunting debate, in particular, is one that can violently polarise opinions. The most overt “bunny hugger” stance does not seem to include any other opinion. Often the context is very one-sided; trying to reason with an animalrights activist about sustainable and ethical hunting practices is tantamount to opening an umbrella on a very fierce southeaster day in Cape Town − it can’t be done.

We need to respect the rights of others, and this principle applies to both the hunting and non-hunting fraternity. Social media have played a pivotal role in these debates in recent times. The case of Cecil, the lion who was hunted in Zimbabwe, showed just how volatile such a situation can become. At the time, the dentist from the USA who shot the big male lion had no idea what a negative worldwide storm this hunt would create.

By contrast, the positive things that flow from well-run hunting areas never find traction on social media platforms because they are never put onto these platforms. Instead, well-meaning individuals and groups are often swept up into funding anti-hunting activist groups based on hard-hitting images and emotional blackmail, and don’t usually have a clear understanding of where and how their money will actually be used.

When considering the consumptive uses of wildlife, such as hunting, we need to have a better understanding of what is being done. And, most importantly, this needs to be communicated to the world in a positive and informative way.

Nobody is saying that you have to like hunting, but do not dismiss it as a viable and sustainable option if you don’t have all the facts. We all know that there are some negative and unethical hunting practices such as “canned hunting”, but there are also other great success stories: places where hunting has been carried out for half a century with no decline in wildlife, and which in fact has resulted in thriving wildlife populations.

The great danger that we face in this world of instant messaging is that people who often want exactly the same thing – effective biodiversity conservation – are at loggerheads, and will fight to prove either their pro- or antihunting stance. The travesty is that while the two “conservation factions” fight on, the crime syndicates are methodically wiping out biodiversity in Africa. They have no conservation agenda, and will not stop until the last rhino is dead, the last elephant is down, the roar of the African lion is silenced, the shuffling walk of a pangolin on night forays is no longer seen, and the last leopard skin has been draped over the shoulders of a wannabe warrior.

What is needed is for us all to stand together against a much more powerful enemy. The war against the poaching- and crime syndicates will only be won if we pool resources and stay one step ahead of our common enemy.

There are great success stories in South Africa where government-run protected areas have partnered with privatelyowned nature reserves to develop a model in which everyone benefits. This is not to say that all stakeholders always agree with each other. On the contrary, it is often the robust debate carried out in a respectful and engaged manner, allowing all to participate, that brings about the best possible sustainable utilisation practices.

In this way, we stand to enjoy those “Out of Africa” scenes with representative wildlife for centuries to come, instead of relegating these to “once was” memories. We need to engage in a way that is meaningful, and look for ways to build up our natural biodiversity – not by polarising opinions within the conservation ranks, but by working towards a common goal of sustained utilisation for present and future generations. 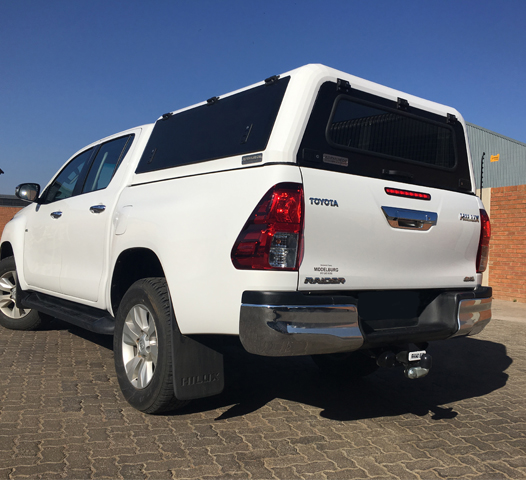 Answer a simple question about this month’s Game Watch column and stand to win an RLD stainless steel gullwing double-cab canopy worth R25 000!

For more go to: www.rlddesign.co.za

What are the greatest threats to biodiversity in Africa? Email your answer to: editor@sa4x4.co.za, using the tagline RLD#1. Remember to include your name, delivery address and a contact number.

Selection is at random from all emails received with the correct answer to either (or both) the first or second question. The competition runs for two issues of SA4x4, and closes on 10 June. Only entries received before this date will be considered. The canopy is suitable for all locally available double cabs. Fitment is free at the RLD premises in Pretoria. If the winner resides outside of Gauteng, courier costs will be covered, but not fitment costs.