It was midday, and had, by now, been raining for almost four hours non-stop. We had just arrived in the Mutinondo Wilderness in north-central Zambia after a week of travel from SA, and things hadn’t gone smoothly. 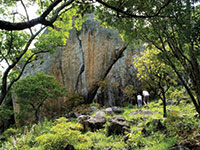 There’d been a blown head gasket on one of the three Defenders in our convoy, torrential rains, hours of border post delays, hellish roadblocks on the road to Lusaka, manic traffic in the Zambian capital itself and endless electrical problems in the vehicles. Somehow, though, none of those experiences seemed important in light of what we had seen: the breathtaking Matopos and the unimaginably impressive Great Zimbabwe ruins in Zimbabwe, the inviting Forest Inn and the mind-blowing congregation of 10 million straw-coloured fruit bats in Kasanka National Park in Zambia.

Getting to the Mutinondo Wilderness area is relatively simple, even in the rainy season. The turn-off to the lodge is situated along the Great North Road approximately 165 kilometres north of the town Serenje, and is well signposted. A further 25 kilometres – on a road that requires at the very least a vehicle with decent clearance, and possibly 4WD during the wet season – brought us to the main camp and reception area. The road seemed well maintained, despite the mud.

The area is characterised by Miombo woodland, typical of the greater region. Mutinondo borders on the wildlife mecca of the Luangwa Valley, and it’s not uncommon for a lion or elephant to wander into the territory. Unfortunately, Mutinondo has been heavily poached, and, as a result, animals are not abundant. Being outside a national park means that the area falls outside the protection of the Zambian Parks Board, and antipoaching efforts are thus inconsistent and poorly funded. As a result, it seems that if it moves, and is made of meat, it is targeted; and disappears faster than an African autumn. On the up side, this does allow the visitor to enjoy the area with almost no risk of running into a dangerous animal.

This area has some of the most striking landscapes you’ll find in southern Africa. The local topography is dominated by granite inselbergs: massive extrusions of rock which resemble a whale breaching the ocean’s surface, they’re appropriately known as ‘whalebacks’. Laid between them is a dense blanket of Miombo woodland. Apart from the 300-odd species of birds (most notably the Long-toed Flufftail and Bar-winged Weaver,) one of the enigmatic wonders of this vegetation is the almost complete lack of thorns.

You can stumble around the bush barefoot and carefree, without a scratch – just watch out for the stinging nettles! When we arrived, we were greeted by Mike Merritt and Lari Bosman, who settled in this area amongst the local Bisa people in ’94. They couldn’t simply buy the land, but needed to present a proposal to the chief for his consideration; which contributed to their realisation of how linked the people are with the landscape. So, rather than simply developing a conservation area, they used the land for social development efforts, and established an agricultural shop in the nearby town of Mpika.