Home » Kingsley, out of Africa

Having wrapped up Africa, King and crew set their sights on unfamiliar climes, tackling Asia in the first of their Africa And Beyond expeditions.

I’m sitting in The Pudding Shop in Istanbul, with delicious roast chicken in front of me, and Kingsley Holgate beside me. It’s my fourth day in Istanbul, and we should have been hundreds of kilometres away by now, exploring the ancient history and magnificent landscapes of Turkey. Instead, we’ve been waiting, and waiting, for Turkish officials to release the two Land Rover Discoverys and the one Defender 130 from customs. And, because of other delays in shipping, Kingsley has already spent over three weeks in Turkey.

“Having been to every country in Africa, traced the outside edge of Africa, travelled its major waterways, and visited its Seven Iconic points, we felt that we had wrapped up Africa − as much as this beautiful continent can be wrapped up. So we started looking beyond its borders, and came up with the idea of expeditions that were Africa and beyond,” Kingsley explains.

That was the beginning. But it was Mike Nixon, a key member of the expedition crew in the last few years, who suggested Kathmandu while they were sitting around a campfire one night, looking at an atlas. Once the destination had been decided on, things happened at speed: the route was planned and the dates set. Now, a few months later, I find myself sitting with Kingsley in Istanbul, the mysterious metropolis that was once Constantinople, and once Byzantium; the city that was the capital of three empires.

“We started on Mandela Day, 18 July 2018, in Cape Town, with the scroll of peace and goodwill signed at the Nobel Square at the Waterfront. From there, it was a three-month haul though the familiar landscapes of Africa − first up the east coast of South Africa, then into Mozambique and Tanzania. Along the way, we carried out our humanitarian work: the Right to Site campaign, in which we do eye tests and distribute reading glasses to those who need them, but can’t afford them, or don’t have access to them. We carried on with our malaria work, distributing anti-malarial mosquito-nets and also continuing our spraying campaign. Called Tchau-Tchau Malaria in Mozambique, the spraying campaign has been incredibly successful, with over 1000 sprayers in operation. We don’t do the actual spraying work, but focus on the education behind the program, along with the net distribution. Then there’s the LifeStraw campaign and the Rhino Art education campaign, both of which we will continue in Asia on the way to Kathmandu.”

We haven’t driven all the way to Istanbul, though – we drove from Cape Town to Dar es Salaam, and the vehicles were shipped from there to Istanbul. That brings us back to Istanbul, this mysterious metropolis that was once Constantinople and before that Byzantium: the city that was the capital of three empires.

I know that most of you want to find out what Kingsley and crew are doing in Asia. (Actually, strictly speaking, we’re still in Europe while I’m chatting with King – Asia only starts across the Bosphorus, in the other part of Istanbul). Doing humanitarian work in Africa is easy to understand – we have mosquitoes and malaria, we have dirty water and water-borne diseases, we have people too poor to afford the reading glasses which would change their lives, and we have rhinos being poached every single day. Why Asia?

For the rest of the story, grab a copy of the February issue of SA4x4!

While I was with the expedition, I chatted to Ross about their Land Rover Discoverys, because there is the perception that Land Rover has softened them up too much in their bid for luxury SUV sales, and that they’re no longer suitable as expedition vehicles. But Ross has been hugely impressed with their capabilities, as well as their comfort levels, which make those months on the road that much less tiring.

The Holgates told us what they had done to get their vehicles expedition-ready: 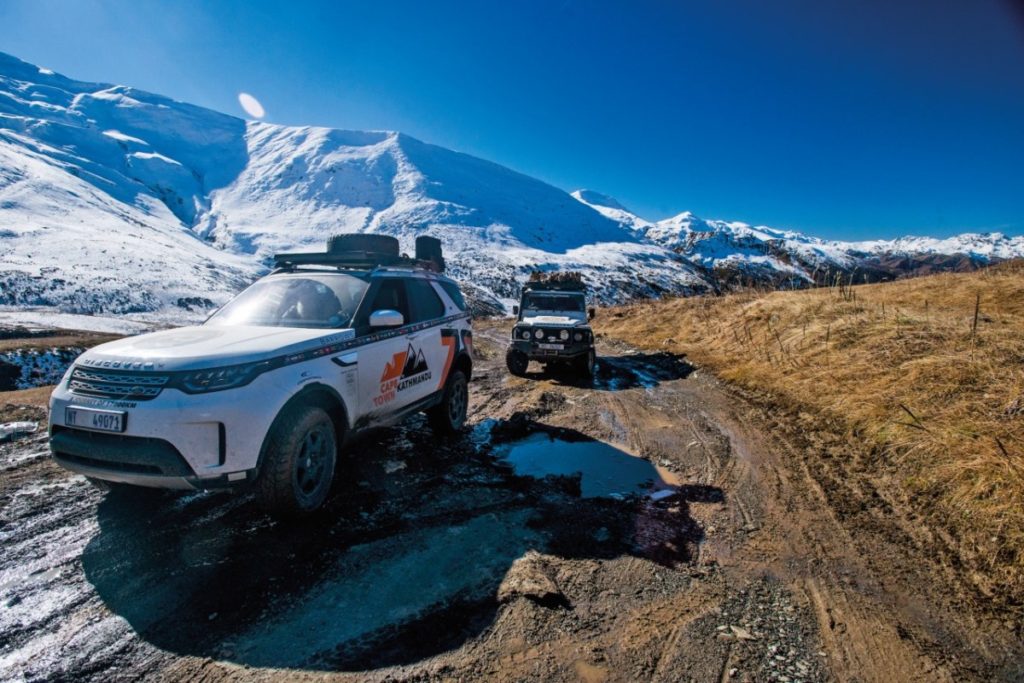 We fitted the 2018 Discoverys with a Frontrunner roofrack with mud ladders, a spade, a spare wheel bracket, a front LED light bar, and two Jerry cans for spare diesel.

At the rear of the vehicle, we mounted a wireless Warn winch system and a removable tow bar.

Inside the vehicle, we have a luggage cage behind the rear seats, and a ‘floating’ dual-battery system with a mounted ARB air compressor.

The vehicle is fitted with Melvill & Moon seat covers; and, for communication, each vehicle has a VHF mobile radio system.

For suspension, we increased the ride height of the vehicle slightly, to prevent overuse of the vehicle’s air compressor in off-road conditions. 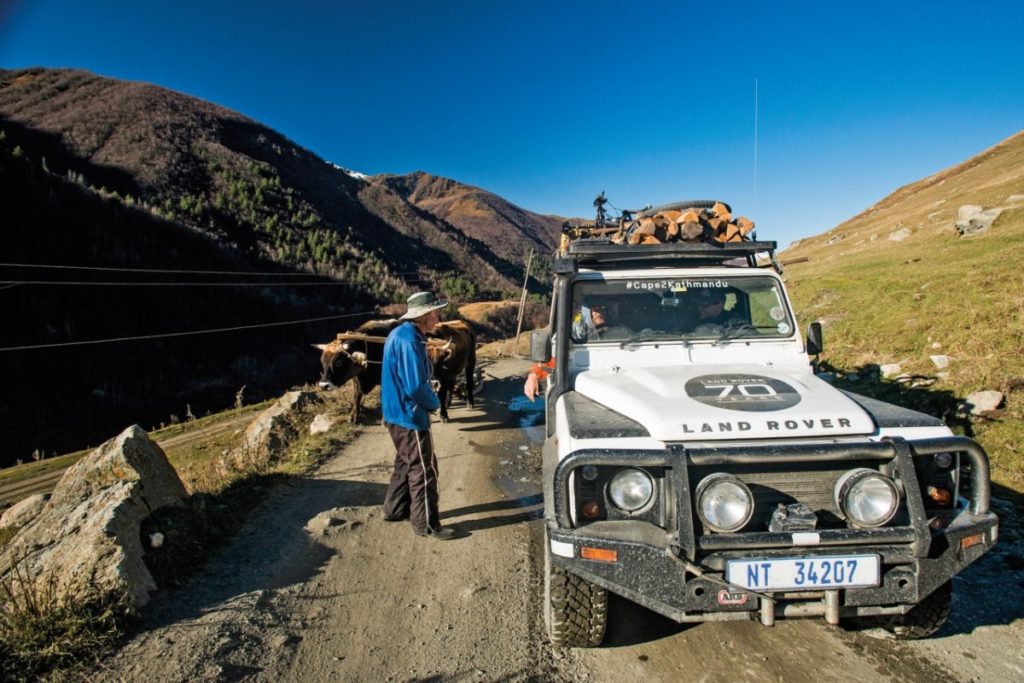 The vehicle is fitted with an ARB bull bar with spotlights and a winch, as well as protective plates for the front and underside.

The rear of the 130 is fitted with an Alu-Cab canopy system, a Frontrunner pull-out fridge and box tray, and an internal Frontrunner roofrack which serves as a loading deck for camping equipment and humanitarian items. The canopy has internal LED lights, and we have fitted a dual-battery system in the rear.

Above the canopy and cab, we have two Frontrunner roof-racks, fitted with a high-lift jack, a spade, a spare wheel and bracket, four Jerry cans, and a 50-litre water tank. A second spare wheel is mounted on a swing-arm system at the rear of the vehicle.

The suspension on the Defender has been replaced with Old Man Emu coils and springs.