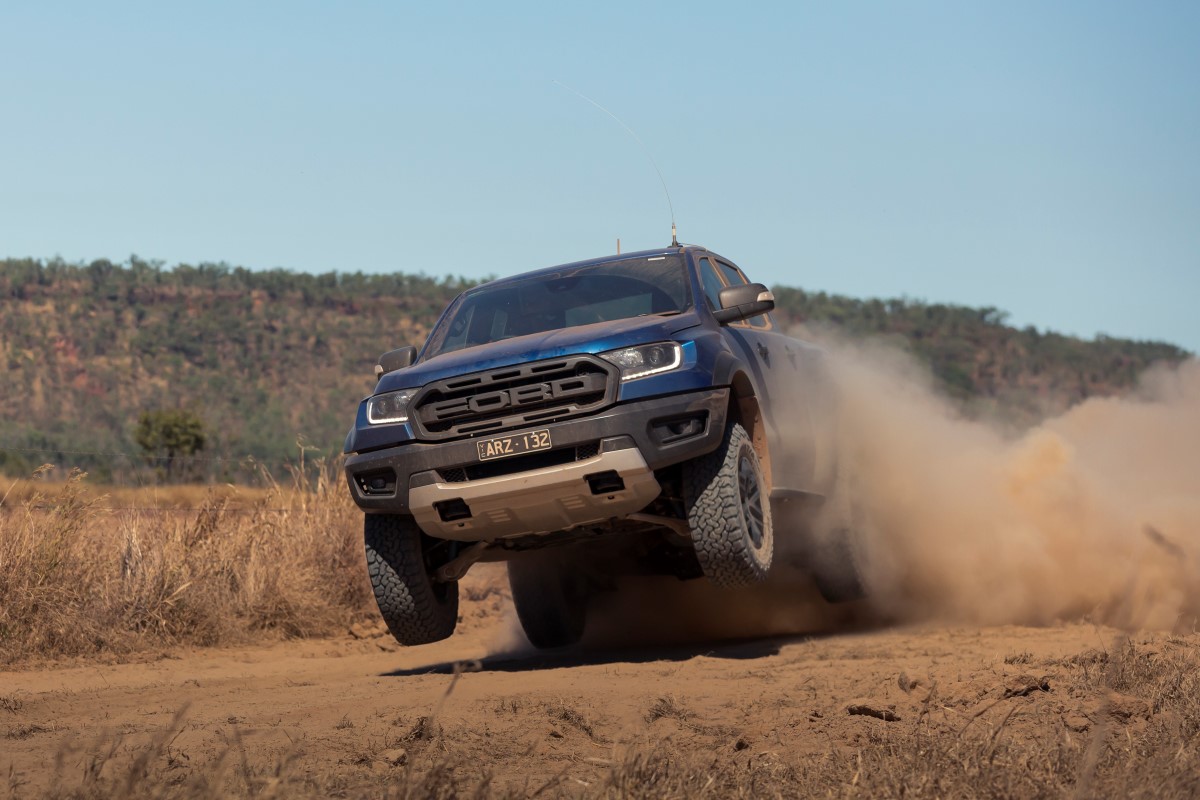 Raptor is a name synonymous with off-road racing, Baja 1000 big-bore petrol engines, and adrenaline-fuelled driving. And now it’s been filtered down to the Ranger. But, instead of the twin-turbo 3.5-litre V6 petrol in America’s latest F-150-based version, we get a sprightly 2.0-litre, twin-turbo, four-cylinder diesel. Does this mean that Ford has softened the brand, or does the mini-Raptor still cut it for the adrenaline junkie?

We went to the Aussie Outback for a flat-out drive to find out.

Although the engine is smaller than the 147kW five-cylinder 3.2-litre Duratorq that has made a name for Ford’s crop of T6 Ranger bakkies, the Raptor’s little 2.0-litre oil-burner produces more power − with 157kW on tap at 3750rpm, and 500Nm from as low as 1750rpm. The smaller mill is blown with two sequential turbochargers, with power sent through a ten-speed viscous automatic which was designed and built in-house. It has such a wide spread of gears that the low-range transfer case is rendered almost superfluous. The gearbox is programmed to keep the engine in its optimum power band for as much time as possible. It is allied to Ford’s Terrain Management System (TMS) which alters the engine, transmission and traction-control settings depending on the demand, and your mood. Choose one of six modes, all selected from the steering wheel: Normal, Sport, Grass/Gravel/Snow, Mud/Sand, Rock and Baja. The latter is inspired by flat-out off-road racing, and pares back the traction control to allow slides, while the gearbox holds onto cogs for longer, allowing the engine to rev more freely.

The ratio spread of ten gears was found to be optimal after exhaustive testing of cog swappers ranging from 7-speed to 13-speed units. Despite having so many gears, the box is over-engineered: it’s the same one you’ll find in America’s Mustang GT and the much heavier F-150 Raptor. The latter’s 3.5-litre Ecoboost puts out 335kW − well over double the power-output of the 2.0-litre.

Because of the 10-speeder, the Ranger Raptor is extremely responsive, helping to propel the bakkie from 0-100km/h in 10.5 seconds (which is just a tad quicker than the Ranger 3.2’s 10.6 seconds). Although the performance is not blistering, expect huge gains in fuel economy compared to the bigger mill: the combined figure is a sipping 8.2 litres/100km.

Although the driveline is impressive, it’s the chassis and suspension that make the Raptor a driving sensation. If you look closely, you’ll notice that the chassis doesn’t come from a Ranger at all, but from an Everest SUV, with the ladder chassis beefed-up along its length, and the strut towers larger and significantly reinforced. The front suspension features Raptor-specific forged-aluminium upper control arms and cast-alloy lower arms; and the rear axle is a stronger, wider version of the one used on the Everest, located using the same Watts link set-up allied to a coilover suspension. Both front- and rear tracks have been widened by 150mm to aid stability, and the centre of gravity has been lowered, despite an extra 51mm of ground clearance – much of it due to the bespoke BF Goodrich 285/70 R17 LT-spec KO3 tyres designed specifically for this vehicle.

The Raptor’s long-travel suspension is kept in check using tailor-made internal bypass shock absorbers developed with Fox Racing. These feature large 46.6mm pistons, and are position-sensitive. Progressive damping is achieved because the internal bypass system uses a series of valves which are blocked off along different stages of the stroke, so damping stiffness increases at the end of each stroke, resisting topping-out or bottoming over big jumps.

The result of the chassis- and suspension work is a vehicle which is not only tougher and more capable, but also more comfortable than any standard 4×4 using leaf springs. As our test runs in the Outback showed, the Raptor can be thrown into off-camber corners at almost any speed without rolling over, and has the ability to jump well over five metres onto flat ground both comfortably and safely.

Compared to a standard Ranger, it also stops with precision. The rear borrowed from the Everest means vented disc brakes all round, with new calipers and bigger rotors.

As expected, a rear diff-lock comes as standard, and two genuine recovery points rated for snatch recovery are fitted to both the front and rear – an asset that is unique-in-class.

Because of the wider track, long travel suspension and larger tyres, the body has been widened and composite wheel-arch extensions have been added − making a width increase of 150mm. Unique colours are on offer: Race Red, Lightning Blue, Shadow Black, Frozen White and Conquer Grey. The Ranger Raptor, at 1870mm tall, 2180mm wide and 5398mm long, is significantly larger than a standard Ranger.

LED lights and a striking Ford grille also set off the aggressive look; and the silver 2.3mm steel bash plate is much wider, longer and thicker than the standard Ranger unit. Matt black die-cast aluminium side-steps stick out a little too much to be considered real rock sliders, but they protect the flared rear arches from being struck by rocks thrown up by the front wheels during high-speed turns. 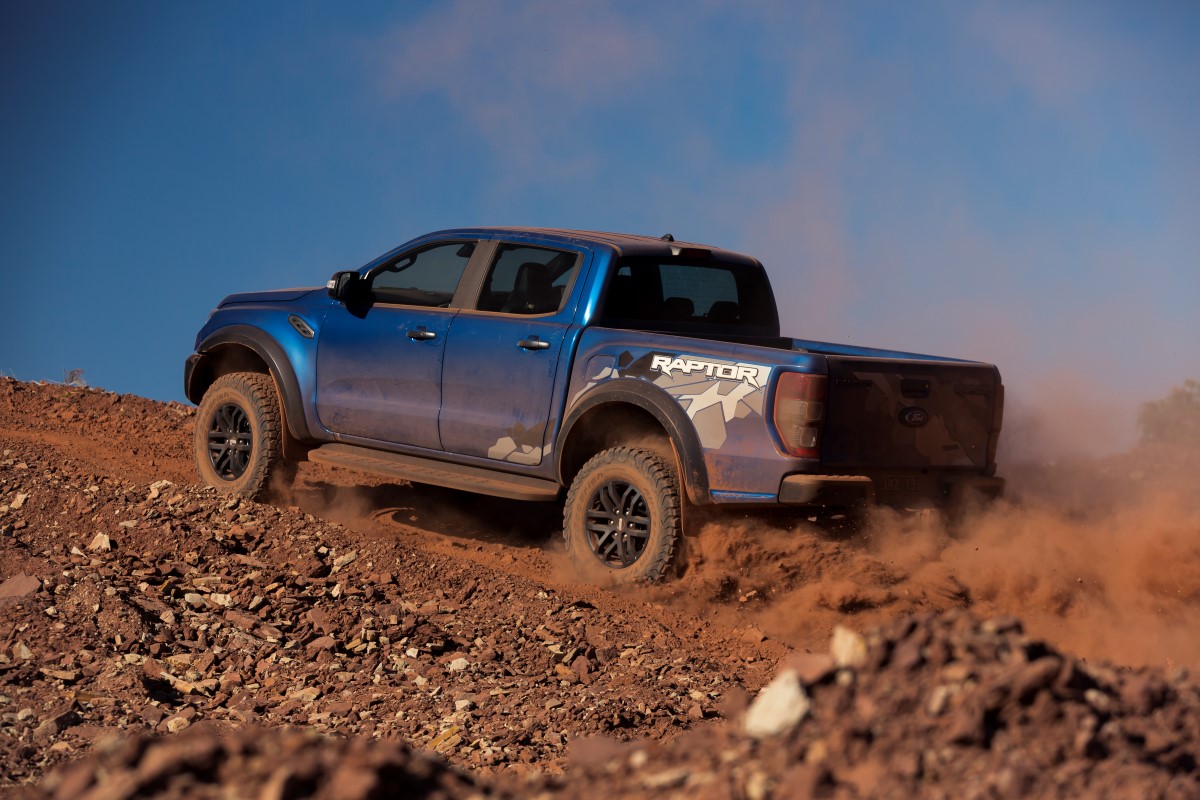 Inside, you’ll find the usual top-end Ford interior, including the Sync3 interface and touchscreen; although now there are bucket seats, a red stripe on the wheel and – most notably – paddle shifters and that drive mode selector. 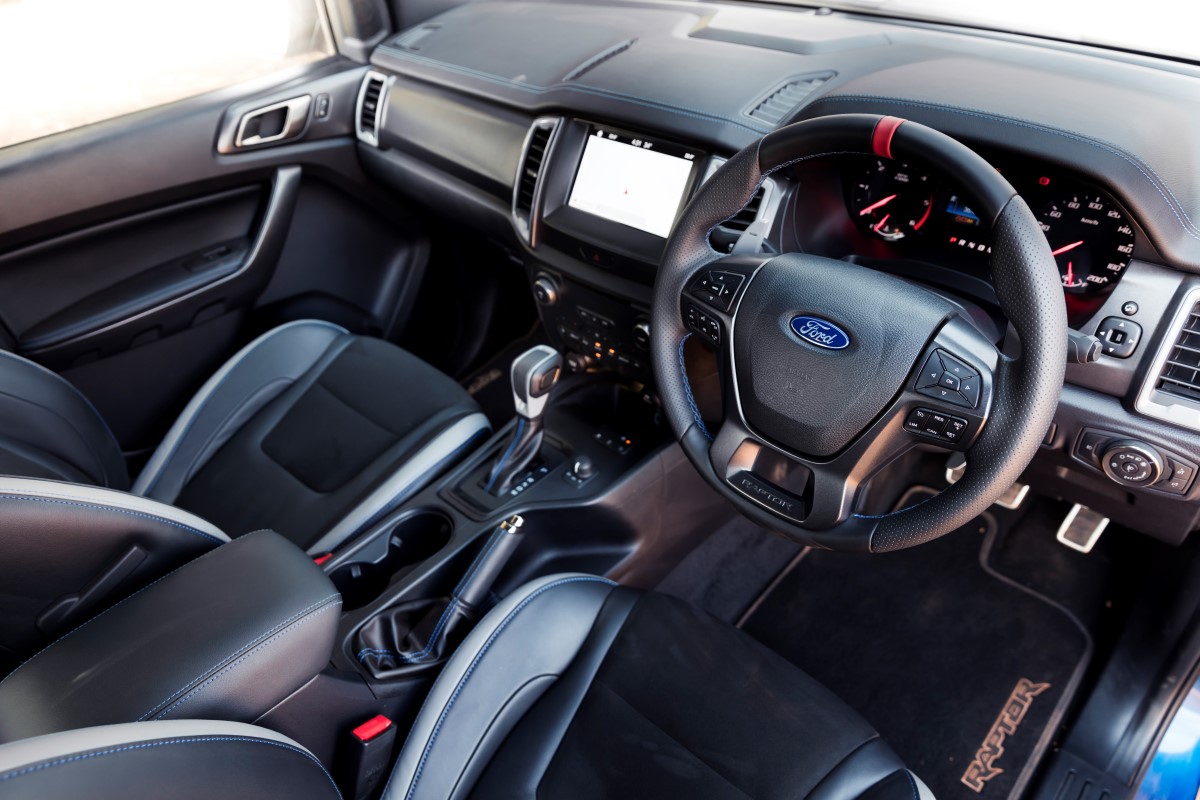 With a vehicle as extreme as the Ranger Raptor, and the performance as focused, the drive is more important than anything else. In traffic, and on the open road, you won’t notice anything special apart from that 10-speed gearbox smoothly whirring between its many cogs.

Nor does the engine offer the neck-snapping punch that many were hoping for:  it’s refined, and does the job, but feels lacklustre compared to six-cylinder rivals. Thanks to the softer suspension and coilover rear shocks, the load capacity has been dropped by well over 200kg, and the towing capacity by over a ton.

Next year, the Wildtrak and XLT are likely to be offered as an option with the same 2.0-litre four-pot and 10-speed transmission. These will retain their load-carrying ability, but won’t have the trick chassis or Fox-tuned suspension.

What these load stats above tell you, is exactly the point of the Raptor: it is not a workhorse bakkie. Take the brute off-road, and the chassis-work is immediately apparent from its extremely plush ‘magic-carpet’ ride, high stability, and uncanny ability to soak up huge impacts that would (quite literally) destroy other standard bakkies.

So, if you need something that looks incredible and offers world-class performance in the dirt, allied to the durability and practicality of a bakkie, look no further. Pricing has been confirmed at $75 000 in Australia, so expect the Ranger Raptor to flirt with the R800k mark once it’s sold here.