Home » Law of the Jungle

Standing thigh-deep in a clayey sloot, I watch the Fortuner’s tyres creep along the 200 mm ledge. It’s hot and humid, beads of sweat run down my face – but I fight the urge to blink. The Fortuner’s track width only just straddles the wash-away. To one side, a rocky mountain face threatens to maul the Fortuner’s flanks; to the other side, there’s nothing but a forest of trees and a long fall to ground zero.Words and pictures by Grant Spolander.

My arms are high above my head, but my hands are only just visible to Gary above the Toyota’s bonnet bulge. I slowly cup my fingers and direct him to drive forward. Inch by inch the Fortuner creeps along the ledge, then a large chunk of earth breaks free and tumbles to my feet. I flap my arms like a bird in distress and shout, “STOP!” Gary slowly and deliberately selects reverse gear, and I pray that the Fortuner won’t wheel-spin as it claws its way rearward. Thankfully, the 33” Cooper Maxx tyres bite deep and slowly move the vehicle out of harm’s way. We had only just started the second half of the Mafefe 4WD route; and, up to that point, it had taken us almost three hours to cover a mere 100 metres. Strictly speaking, this part of the trail should be called the Lekgalameetse Route; but, then again, even the name ‘Mafefe’ is a thumb-suck.

Roughly 40 kilometres long, the trail covers a section of the African Ivory Route, and tracks past Mafefe Camp. From there, the route heads westwards into the northern Drakensberg and deep into the Lekgalameetse Nature Reserve. As such, the route isn’t a trail in the conventional sense; there are no indemnity forms, recovery facilities, or even a route map to refer to − half the trail is a public road and the other half is within a national reserve. But, make no mistake: this is one of the most spectacular routes in SA. The route can be driven in either direction, but travelling from south to north is best. If you do things this way, you start the trail on the African Ivory Route side, head through Motsane village, and, once you’ve reached two wooded pillars planted in the ground, you will officially start the route – that is to say, it’s the point at which you’ll want to engage low-range. Before that, most of the road leading up to start of the trail is a bumpy dirt track.

The route to Mafefe Camp climbs quickly on the mountain’s flanks; on the right-hand side you’ll enjoy incredible views of the Olifants River, along with a hazyblue backdrop of distant mountain peaks. The road is mostly rock embedded in compact clay, which makes for a bumpy ride. You’ll want to deflate your tyres as much as possible; stop just before they begin showing signs of bulging on the sidewall. 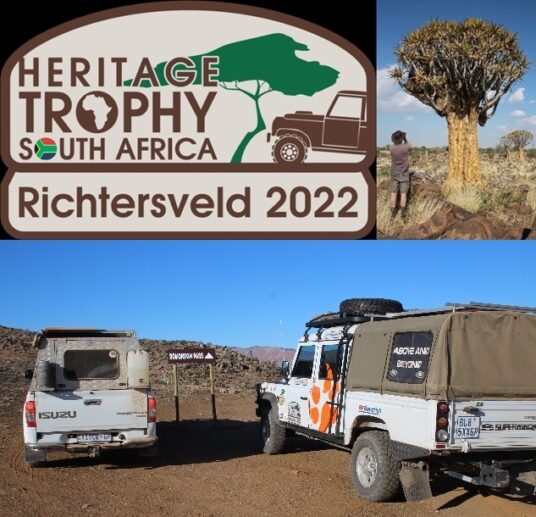 Calling all adventurers who want to join the great Richtersveld Heritage Trophy: 17-24 September 2022!