Everybody’s heard a Zimbabwe travel horror story. Under the rule of Robert Mugabe, corruption thrived in all but the most remote reaches of the vast and diverse country. One would encounter dozens of roadblocks between Bulawayo and Harare, each ‘staffed’ by police or scammers seeking nothing more than to extort one for a couple of trillion Zim dollars. Journeys by road became arduous and expensive – and often dangerous, too.

Well, I’m happy to report that things have changed. Zimbabwe, it seems, is open for business. The fall of Uncle Bob has paved the way for optimism and recovery, and the newly incumbent President Emmerson Mnangagwa knows that tourism is one of his nation’s prime resources. It’s almost as if he has given a direct order to his police force: If you see a car with foreign plates, let them pass!

Best of all, the beautiful, kind, hospitable nature of the Zimbabwean people has begun to shine through. There is a good feeling in the air, but whether it lasts remains to be seen. All that you need to know is that Zimbabwe’s natural beauty is calling. It wants you. 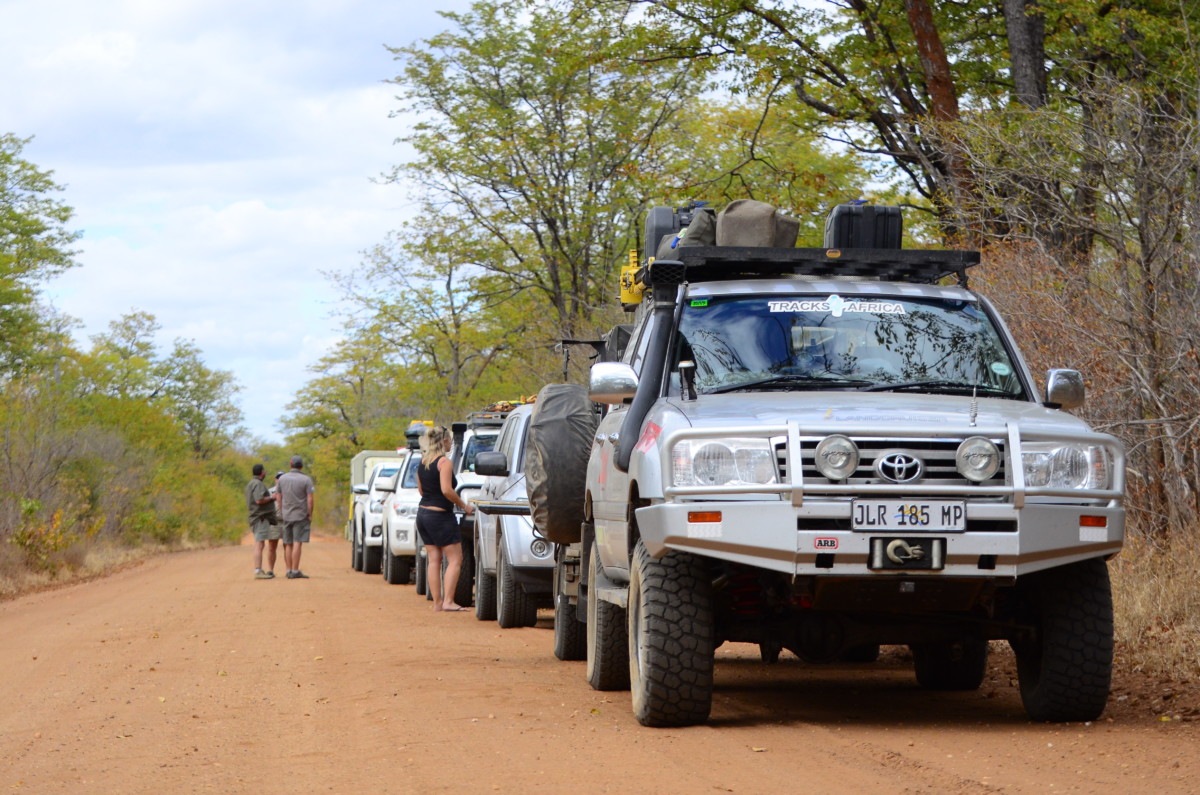 Our convoy ready to rock and roll.

Like many overlanding stories, this one starts with a rather unsavoury encounter at a border post. I know that there are regulations governing the movement of fresh produce between countries… but our veggies aren’t going to collapse your ecosystem, man!

Our first obstacle came in the form of the Stockpoort Border Control point in Limpopo. Everything went smoothly until we had our Rosa tomatoes – essential ingredients of that evening’s dinner – snatched by a toothpick-lolling official with no time for niceties. A few hours later, we bought an identical bag of tomatoes in Francistown. For all we know, it was the very same one.

Simon and Desiree Steadman, the powerhouse couple that run Ultimate Adventures, had kindly agreed to accommodate me in their hardy Land Cruiser for this once-in-a-lifetime expedition to the northern reaches of Zim. Daunting as it may seem to spend two weeks with total strangers, it’s so easy to like this couple. They love what they do, and it shows!

With nothing but road ahead of us, it was time to meet up with the rest of our convoy at Woodlands Stop-Over in Francistown. We’d be using it for just that, stopping over, and making our way to another border in the morning. Once we had set up camp at the beautiful rendezvous point, it was time to get acquainted with our new family: Ettienne and Nelia Grundling in their Hilux Revo with an Imagine Trailvan in tow, Roy and Wendy Olivier, an avid 4×4 couple with their own kitted-out Hilux and Echo 4×4 trailer, Mark Ilbury and his two sons Matt & Josh, with their elegant and functional Land Cruiser 200, and Peter Rawlinson, famous for his involvement in Andrew Middleton’s Zambia Migrations trip, still going strong in his stock-standard Pajero.

Morning came too soon after a cheery night of introductions and campfire conversations, but it wasn’t long before we were through the Plumtree border into Zimbabwe. After a quick lunch stop on the side of the road, it was time to get cracking. A new Zimbabwe was calling.

When driving through Zim’s larger towns and cities, it’s clear that change is brewing. By the time you are reading this, the people of Zimbabwe will have elected a president that is not Robert Mugabe – what a time to be alive! There is genuine optimism in the air. I mean, Zimbabweans are generally a happy people, but their hope and faith is remarkable. It doesn’t matter how many times they are messed around, they will always see a brighter tomorrow. Some may call that naïve, but people do what it takes to survive.

Key to any economic resurgence is the revival of the country’s tourism industry. Roadblocks were no hassle at all, and it was genuinely pleasant to drive through the country. People greeted us, waved, and cheered us along. It was a good sign of things to come.

Our next stop was Antelope Park in Gweru. Famous for its lion rehabilitation programme, the resort has excellent facilities and a breath-taking riverside setting. The park’s famous horses wander the campsites at will, but watch out – they are easily startled.

We settled down for some lekker chicken curry and a fat chat, but the cold Gweru air was tough to fight off. I sought refuge in the TV room, where World Cup fever was in full swing, as it would be for the remainder of our tour. Once the action had ended, it was time to hit the sack. The lion roars kept me cosy, but the damn bushbabies just kept me up!

Known as the largest man-made reservoir in the world, Lake Kariba was created in the 1950s as part of an ambitious hydro-electric development on the Zambezi. Plains on which thousands of animals once roamed were flooded, displacing local communities as well. Today, however, the lake has developed into a fishing hub: both commercially, and for enthusiasts in search of the tenacious tigerfish. The region remains rich in game, and the lake’s coastline is home to a burgeoning tourism industry. The vast inland ocean is a must-see on any journey through Zimbabwe or Zambia.

With 500km of tar between us and Lake Kariba, an early start was essential. The drive is long and arduous, but it culminates in a winding descent to the coast, lined with lush vegetation and rolling hills. Once we had arrived at our campsite, where we would be resting for a full two nights, the first point of order was to find a TV – England would be playing Colombia that evening, and Simon, Desiree and I were backing the boys in white all the way.

The warm weather at Lomagundi Lakeside was a welcome change, and a walk down to the small harbour revealed some grumpy hippos, a massive croc and a never-ending view of the vast lake. As we pitched our tents in the fading light, Simon got supper started early. After all, he had a game to catch!

While our older companions took advantage of the early night’s rest, we converged at The Dome, Lomagundi’s open-air watering hole. The mood was tense, but Mark kept things light with his banter. The TV action couldn’t distract us from Kariba’s magic, though. A blood-red moon was rising over the water, but as I ran off to grab my camera, I hit a rotund roadblock with long teeth and jittery ears. The running ended there.

For those who don’t know, England won on penalties, a rare phenomenon probably brought on by the mystical moon in the sky. It was a good omen.

To follow the rest of this Zimbabwean odyssey, be sure to grab a copy of the September issue of SA4x4 Magazine!