When the previous generation Hilux made its local début more than a decade ago, it literally overshadowed its competition. It was bigger than anything else in its class, and some of its engines
were front-runners among their peers as well. And, in an era when most bakkies still adhered to the old-fashioned notion that a dashboard needs to be as square and hard as the load bay itself, the Hilux introduced us to the concept of a relatively car-like interior – easing the pain of long stretches behind the wheel without relinquishing any of the workhorse toughness which made these
vehicles so popular in the first place.

But in the modern automotive landscape, 10 years might as well be 30, such is the pace of technological development. The competition had chipped away at its competitive advantages and sales leadership. That the old Hilux still managed to end its lifecycle as South Africa’s best-selling bakkie, just, is testimony to its sound basic design as much as to the brand loyalty of its buyers. There’s something to be said for proven (if dated) mechanical bits, solid off-road performance, and the peace of mind which comes from driving a bakkie has earned its “Legend” status thanks to a heritage of durability and toughness.

The all-new Hilux keeps the same basic recipe but changes the garnish to keep it looking fresh. There’s still a ladder-frame chassis underneath, supported by a leaf sprung live axle at the rear and double wishbone suspension in front. While it may appear superficially the same as before, everything about the new Hilux has changed. That rugged chassis is stronger, the suspension is brand new, and the powertrains either new or updated. There’s an all-new, more spacious cabin, and most of the latest safety and convenience features show up on the specification sheet.

The result of all this attention to detail is a Hilux for the current era: more comfortable, refined, safer and fuel efficient than before, but still with that reassuring undertone of robust engineering. However, the latest Hilux adds two elements which were sorely lacking in all of its predecessors: ride comfort and modern powerplants.

Taking criticism about the old bakkie’s ride quality to heart, the engineers clearly spent a lot of time fine-tuning the suspension on the new one. It handles road imperfections with a fluency hitherto foreign to Hilux drivers, and subjectively feels just about as absorbent as competitors from Ford and Volkswagen would on similar surfaces, helped along by more comfortable seats. That old rear-end bounce over surface corrugations is all but banished, and dirt road stability seems greatly improved. This newfound suspension compliance doesn’t come at the expense of load-or towing capability however, for the Hilux is now rated to tow up to 3500 kg and carry at least 925 kg in 2.8GD-6 4×4 format.

As for the engines, we welcome the Hilux to the 21st century with downsized (though not by much) turbodiesel units, all boasting improved performance and mated to six-speed gearboxes in most derivatives. The overall power boost seems modest, with the 2.8GD-6 developing a scant 10kW more than its 3.0 D-4D predecessor, but the way in which that power is delivered makes all the difference. The old engine was somewhat lumpy in its power delivery with its take-off lag and rather narrow power band, while the new one comes on strong, quicker and maintains its peak torque quite a bit longer. As a result, the new 2.8GD-6 engine has a far smoother, more refined feel – an impression amplified by a sizeable reduction in mechanical clatter thanks to more extensive sound insulation. 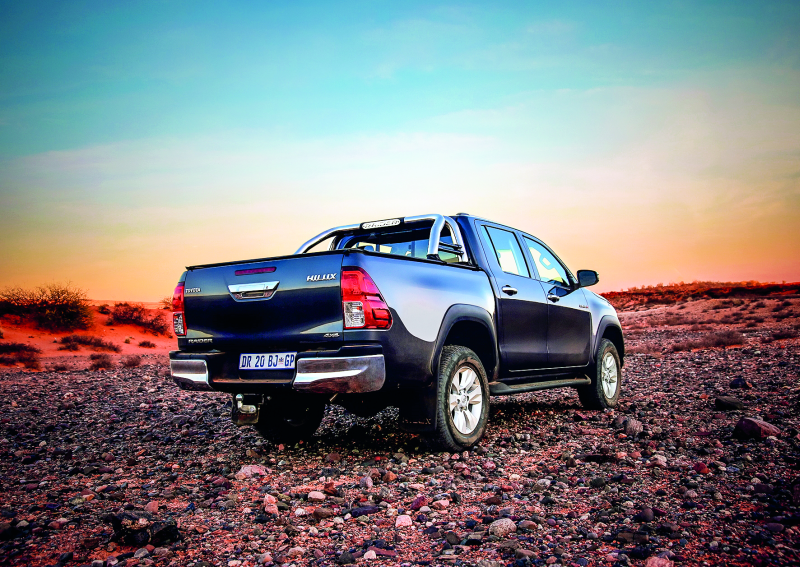