The Ranger Raptor is Ford’s smallest offering in their Raptor line and the only Raptor available in SA, built in SA. Largely based on the Everest SUV chassis, this highly modified and reinforced reiteration of the Ranger is designed for off-road hooning, showcasing unique suspension and an extremely high-tech driveline.

We’ve already driven it flat-out in Australia and locally on a Northern Cape salt pan and surrounding dunes. So it’s now well known that the Raptor can do speed, but how will it fare in a rock-crawling scenario? In the interest of well-balanced off-road reporting, we pitted our test unit against the challenges of Tierkloof 4WD-trail in Rawsonville, one of the Western Cape’s more technical rock trails.

Ever seen a rear-drive Ranger 2.2 sporting a hood scoop like a shark’s mouth and a lift kit a giraffe would be proud of? Of course you have. Luckily, in the case of the Ranger Raptor, almost everything is functional. Underbody ground clearance is up by around 50mm over a standard Ranger. To counter this and <italics> improve stability, the track has been widened by 150mm. The combination of wider front fenders, extended rear wheel arches, smaller 17-inch wheels (as opposed to 18s on the Wildtrak and XLT), plus beefy BF Goodrich KO2 285/70 R17 tyres, give the Ranger Raptor a stance like no other production bakkie out there. 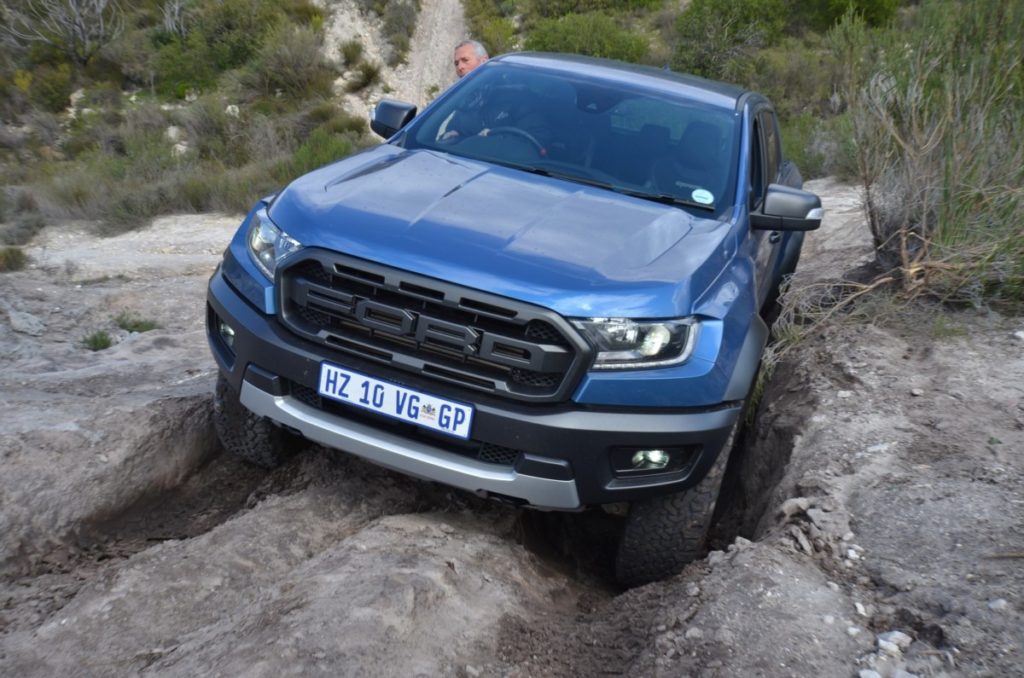 The blacked out Ford grille is set above a genuinely sturdy, full length bash plate as well as two massive recovery points, each rated to 3.8 tonnes.

Unfortunately every action star has a weakness; for the Ranger Raptor, it’s the model-specific side steps. While they do look cool, their cast aluminium construction is tough, and the extra width makes them ideal for climbing in and out, being bolted to the bodywork rules them out as a load-carrying rock slider. Blame the need to properly deploy curtain air bags in a side impact. One other thing, the spokes of those trendy alloys protrude too much, which means they quickly pick up stone chips and, in our case, sustained a nasty scrape on a narrow granite defile.

Overall though, the Raptor is a stunner. Big, bold and in your face – not for the shy introverts out there. 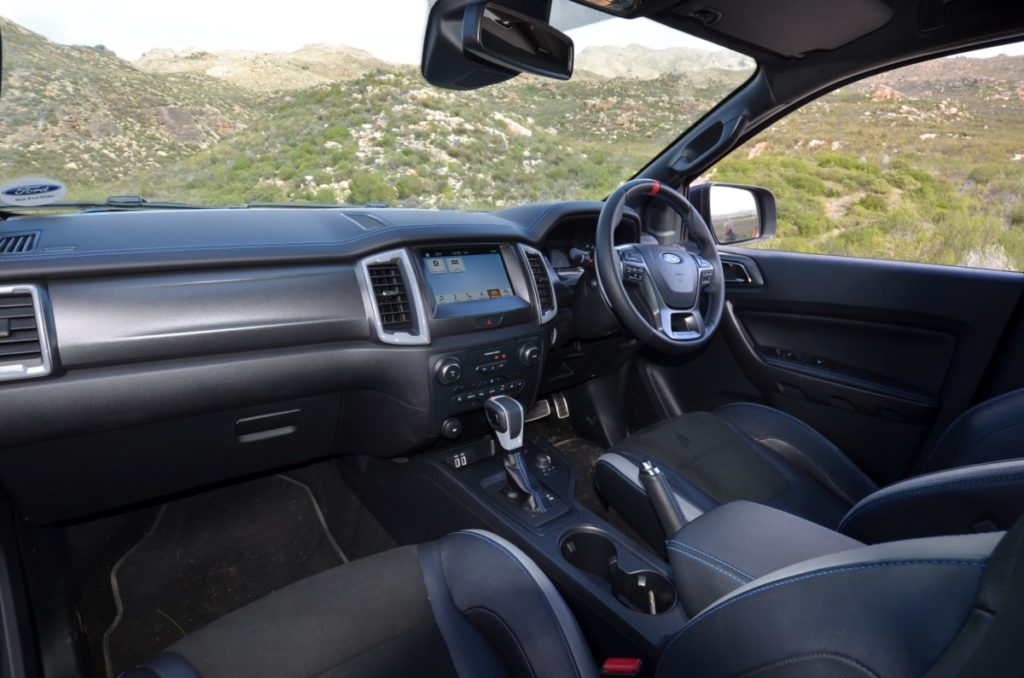 Replacing the Ranger’s single dial digital driver’s display is a twin-dial affair with a big rev counter on the left, a speedo on the right and a faux carbon background. A small central sub-screen toggles between info displays, including 4×4 specific information such as gradients. You also get two large magnesium paddle shifters for good measure – a better way to interface with that 10-speed gearbox when on the move. To balance out the costs of all the good suspension kit, Ford’s ditched some electrickery you’d find on the Wildtrak – including adaptive cruise control.

The Raptor’s 150mm wider track and 50mm suspension lift means that technically its centre of gravity is lower than a standard Ranger. Next, coil springs on each corner and Fox progressive dampers enable a much broader range of damping characteristics to be dialled in. It’s as soft as a Persian cat on low-speed hits, but firms up sharply when the hits get bigger, across an impressively wide speed range. (See sidebar.) In fact, in our scientific test, no speed bump ever required slowing down for, which saves you money on brake pads and fuel – Ford thought of everything.

Along with the progressive dampers, the rear axle has been replaced with a reinforced version of the one you’ll find in the Everest SUV, including its straight-tracking Watts Link, coil springs and disk brakes. All this makes for flatter cornering on tarmac, a sublime ride and improved braking. Quite simply, the Ranger Raptor feels like a premium SUV on the road, even when unloaded, and no other bakkie can claim that.

Credit must go to Ford for being the only manufacturer to produce a machine built from the ground up to outperform the one-ton bakkie segment off-road. At the core of the upgrades is that Everest chassis with significant reinforcements along its length, including an added cross member, reinforced welds and taller, tougher strut towers. 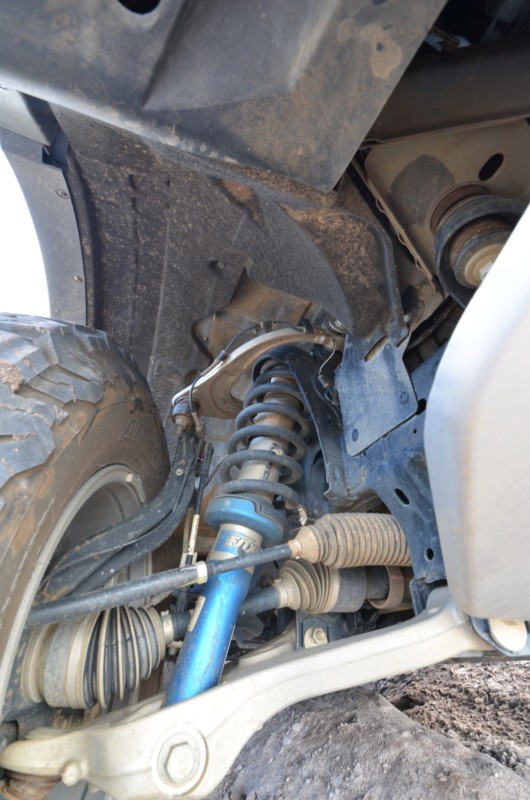 Front suspension control arms are Raptor-specific forged aluminium units and coil springs all round provide best-in-class ride comfort and stability – with a full 30% more travel up front and 23% more at the rear than a standard Ranger. A vital upgrade is the OE fitment of proper all-terrain tyres, with a Raptor-only compound on the standard BFG KO2 pattern, this ensures a decent balance of durability, grip and strength. 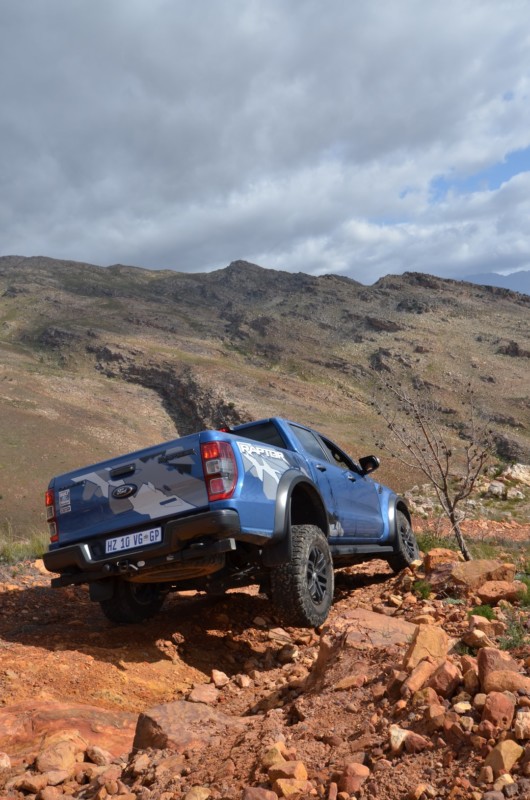 On Tierkloof we primarily used Rock mode, where the brake-based traction control is primed for rapid responses to wheelspin. Still, we frequently resorted to using the rear diff lock to protect the tyres and maintain control on tricky ascents, as Ford’s TC is not in our opinion the most responsive. Using the rear locker also helped the Ford system to divvy power to the appropriate front wheel on the bumpy sections.

That said, the hill-descent control proved very effective and responsive enough for a ‘feet-off’ driving style when driving down the rock steps from the topmost sections of the Tierkloof trail. 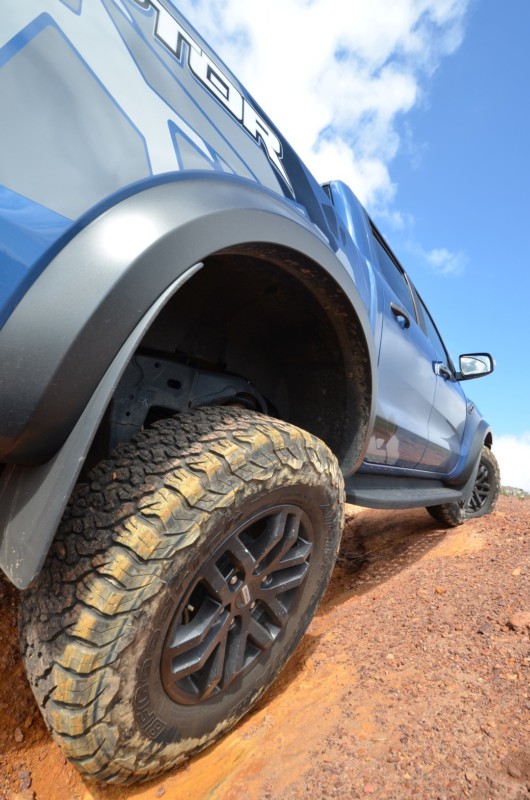 Having driven the same route in a Ranger FX4 just last year, I knew its specific Achilles heel was a poor departure angle of 25 degrees, mainly because of the very low-set tow bar. The Raptor’s version has been raised significantly, improving the departure angle by three degrees, and we did not scrape the rear at all on the trail. The approach angle is 7.5 degrees better, to 32.5 degrees, and the resulting much higher front bumper means you’ll begin to threaten the bash plate before hitting the bumper, in most cases.

While the breakover angle looks improved on paper, the side steps protrude so much that if you’re in a tight squeeze, they will be the first to take a knock. The wider track may also become a problem where a standard bakkie would fit easily. On more than one occasion we had to resort to creative road-building to get through without damaging the wheels and steps.

Everyone would have liked a brutal petrol V8 under the hood, but instead there’s Ford’s new bi-turbo 2.0-litre with 157kW and 500Nm. Raunchy sound and eyeball-flattening power surges are not on the menu here, but the peaky little boosted mill is very effective. To counter the narrow power band, Ford grafted it to their 10-speed automatic, which does a great job of keeping it on the boil at the correct revs. 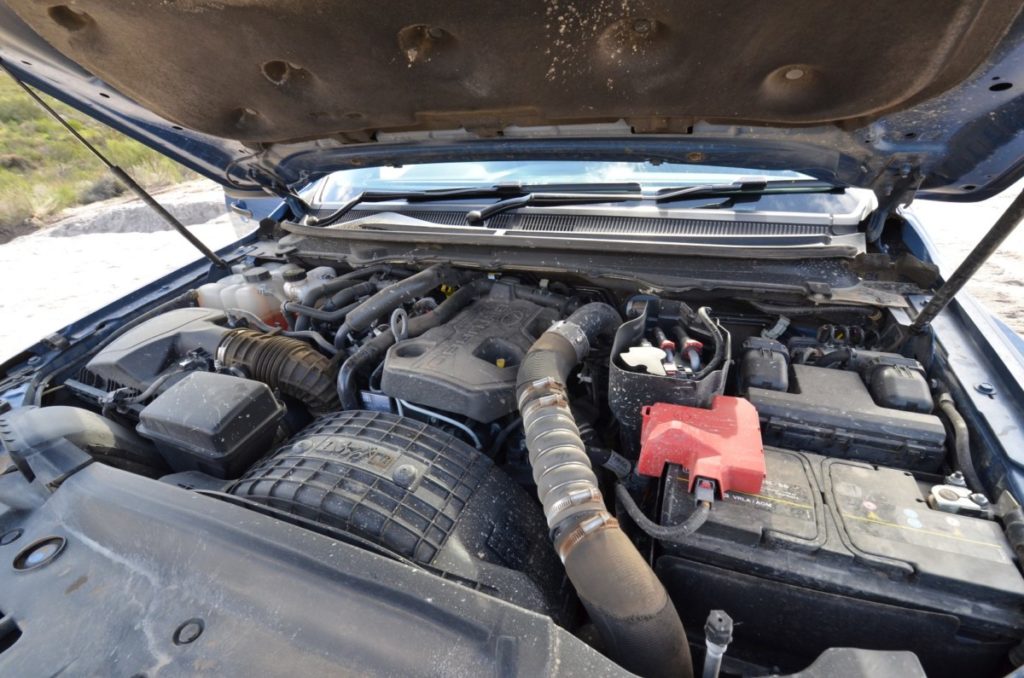 The gearbox programming is so slick, I rarely wanted or needed to use the paddle shifters, as the motor seems to sit in its sweet spot almost all the time under load. Get onto the highway and the wide-ratio gearbox locks up in tenth and drops the revs to just less than 2000rpm, improving refinement.

To say the new driveline is an upgrade from the old 3.2-litre five-cylinder and six-speed transmission is a huge understatement. It’s quieter, snappier and more fuel efficient. On that point, the Raptor lags behind the Wildtrak we recently tested, delivering 11.5-12-litres/100km, against the Wildtrak’s 8.5-9.1-litres/100km. Bigger, chunky all-terrain tyres and a wider body are no doubt the culprits.

Unlike the Amarok, which also uses a very wide-ratio gearbox, the Ranger Raptor has a proper low-range transfer case, making first gear low- range extremely effective for rock crawling at speeds below 1km/h, if necessary. Also effective is the ability to use the manual override, which holds the gears where you needs them – effective for both crawling and steep dune climbs when that bi-turbo motor just keeps on going.

Though the new drivetrain is undoubtedly complex, Ford claims it is both over-engineered and extremely reliable, having proved its ability in both the more powerful 5.0-litre Mustang and heavier F150 pickup. Our experience? The test car had over 11 000 punishing kilometres under its belt, and there was not a hint of drivetrain trauma. 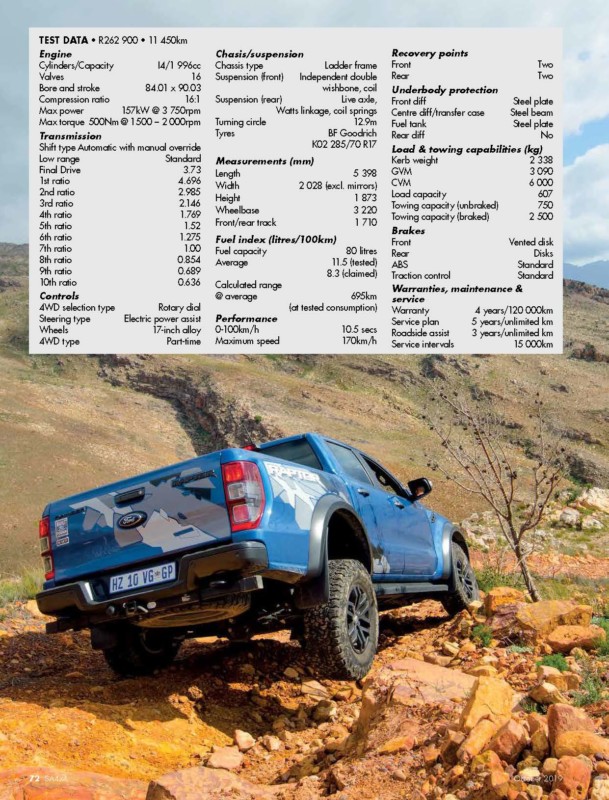 The mini-Raptor has come in for some stick for not being a V8-powered beast, but that misses the point. Take one for a test drive and experience a brilliant combination of hi-tech drivetrain and race-style suspension that gives this bakkie a ride quality and the ability to soak up harsh terrain superior to many SUVs. Is it a true rock-crawler? You bet. It is plenty capable on a trail – just make sure it’s a wide one, or be prepared to unbolt those side steps. 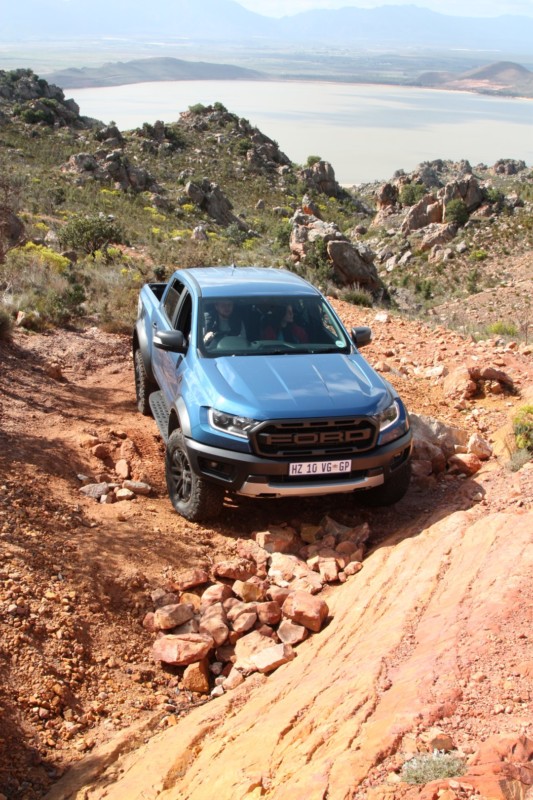 For a more in-depth look at the Raptor’s Fox suspension and its competitors, grab the October edition of SA4x4 Magazine.