With runaway sales of the Fortuner since its introduction way back in 2004, bakkie-based SUV’s have consistently remained top sellers in South Africa. Every other major bakkie brand makes one, but it’s not since Isuzu ceased production of the much-loved Frontier in the same year in which Toyota released its Fortuner, that Isuzu has had an offering in this booming segment. 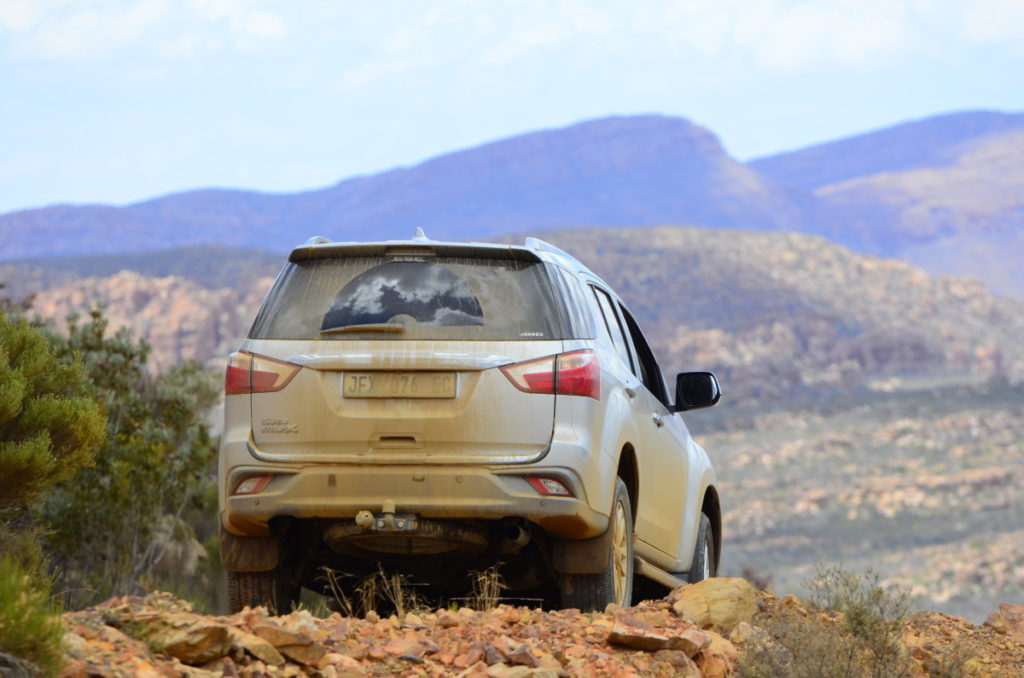 Since General Motors sealed its departure from SA in 2018, taking with it the Trailblazer SUV, the local Isuzu product line-up has been expanded with the mu-X − which has been on sale in other markets since 2013 and now appears in second-generation guise.

It’s essentially the same vehicle as the Trailblazer; but, under the Isuzu banner, out goes the Chev’s Italian-sourced 144kW/500Nm VM Motori 2.8 turbodiesel, which was potent on paper but a little tardy on delivery until spooled up. In its place, Isuzu has retained the venerable 3.0-litre (code 4JJ1-TC HO) that’s been doing duty in Isuzu bakkies for a number of years. Outputs of 130kW and 380Nm (peaking 1800-2800rpm) are down on the equivalent Fortuner 2.8 GD-6 (which has 130kW/450Nm (from 1600rpm), but this old-school turbodiesel retains the cachet of being well proven and very reliable. 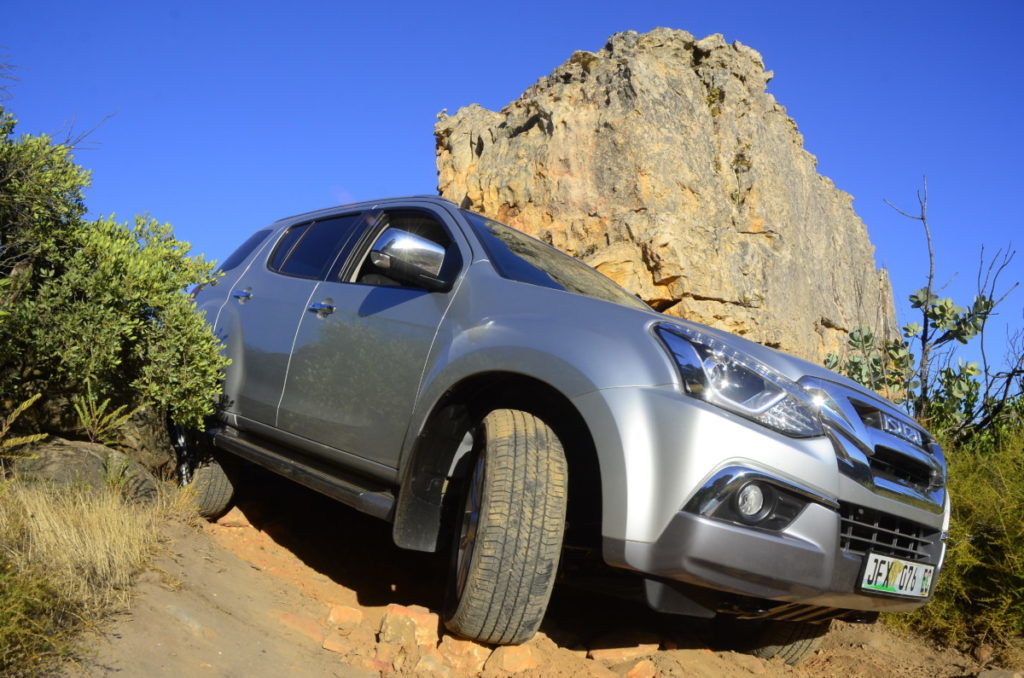 As for the rest of the package, the mu-X shares obvious similarities with the Trailblazer, including a six-speed auto gearbox and most of its underpinnings, and that’s no bad thing.

With only one spec option in the 2WD or 4×4 configurations, you don’t get to choose the kit you want, so Isuzu has just thrown everything in. Entry price gets you an all-leather interior, 8-inch infotainment screen, parking assist with reverse camera, and the familiar Isuzu centre console with rotary switches. 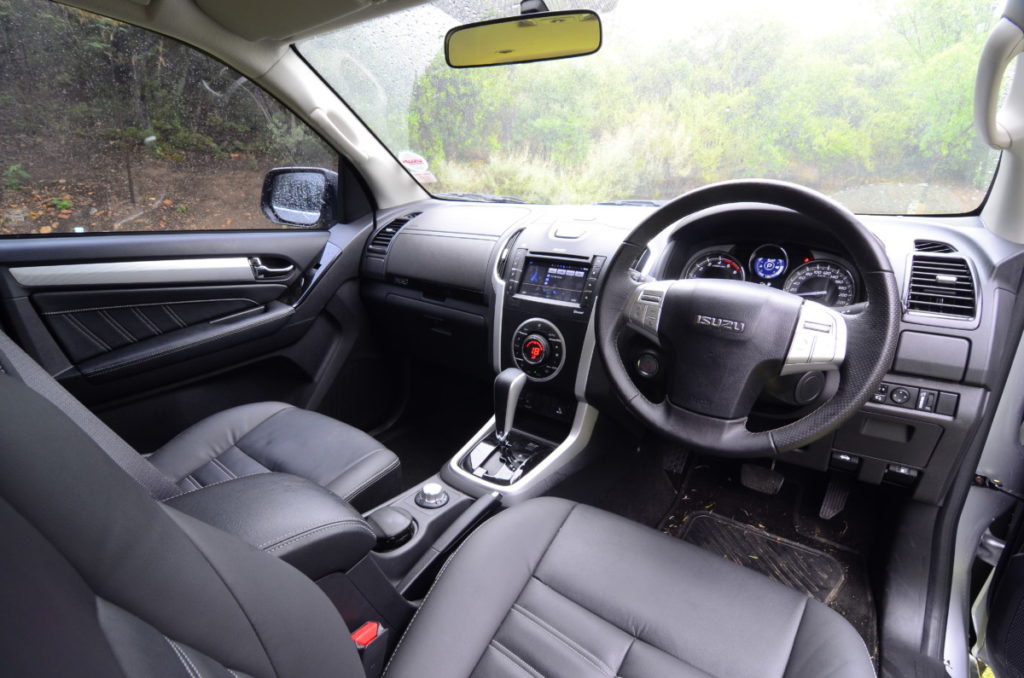 It’s a proper seven-seater in configuration. The second row of seats has a 60/40 split and fold-away armrest, while the third remains tight for adults, but is perfect for the kids − they even have their own climate-control vents and large windows.

Like the Chevy it replaces, the mu-X has 18 storage compartments, coat-hooks, a whopping 12 cup-holders, and even a little cargo organiser box under the boot floor. With all the seats folded (almost completely flat) you’ll be looking at an enormous 1830 litres of load space – great for hauling all the camping gear, plus all those lifestyle items like bicycles.

If there is one distinct area in which the mu-X is on top, it’s in the exterior styling department. It wouldn’t be a huge reach to call it the best-looking bakkie-based SUV out there right now. Featuring bright 18-inch alloys, daytime running lights, LED projector headlamps and large, flared wheel arches, its stance is both purposeful and handsome. Just add a decent set of all-terrain tyres, and the Isuzu would be near perfect.

While Isuzu’s 3.0-litre diesel engine has never been known for stellar refinement or performance, it’s always been a solid runner that’ll clock up massive mileage. Isuzu have done their best to quieten down the old beast for this application, with amazing results.

Thanks to a new six-speed Aisin gearbox, you’ll also be able to sit at over-highway speeds at barely above 2000rpm, making long-distance travel a breeze. The gearbox features a Tiptronic function that responds to up- or down shift commands smoothly, and without much hesitation.

Isuzus have always been known for their comfortable suspension, and the set-up on the mu-X is no exception, as it offers a remarkably plush ride on bad tarmac or on gravel.

During an extended tour through the Cederberg, our test unit performed admirably; and, thanks to its ability to switch between 2WD and 4WD at speeds of up to 100km/h, it was easy to avoid torque wind-up while crossing concrete bridges or causeways by quickly switching between the two modes. Other systems that we’ve tested recently took too long to switch across, or simply froze, forcing us to stop the vehicles and reset the computer by switching off and on again.

To up the ante with the mu-X, and provide a direct comparison with the Trailblazer that came before, we took it to the 4×4 trails at Koningskop. (See our Trail Review in this issue). This provided a challenging mix of rocky sections and steep climbs, to which we added many hours spent on the variable gravel roads of the Cederberg region. 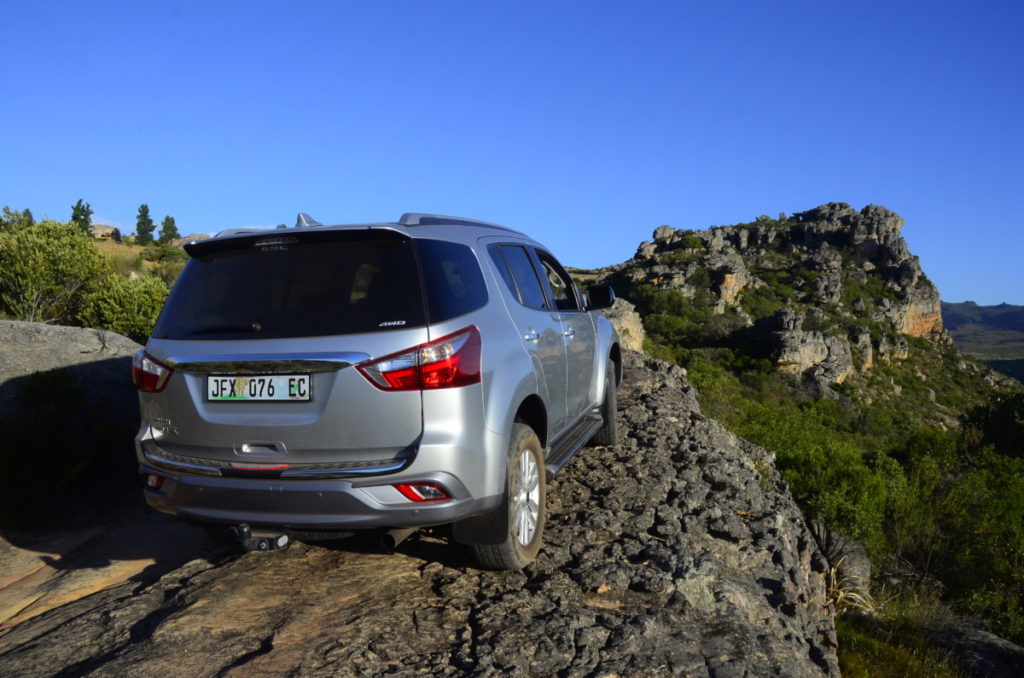 Extremely comfortable on bad gravel, with a smooth ride and high levels of refinement.

The new six-speed automatic is smooth and has longer legs than the five-speed auto in the current D-Max.

The engine is tried, tested and reliable.

Infotainment system could be more intuitive.

Engine still has that ‘old school’ feel, and hates to rev.

We found the gravel-road performance admirable thanks to that compliant suspension soaking up the hits from potholes without fuss, and keeping the rear well-planted over the corrugations that crop up at most corners.

While tackling technical sections of Koningskop, we were able to try out the hill descent control. We found that it works well on steep, smooth surfaces, but struggles on loose rock − where I reverted to first gear in low-range and modulated speed using the appropriate foot dabs on the long-travel brake pedal.

Our Ramp Travel Index (RTI) yard test measures axle articulation, and here, the mu-X score of 490 was somewhat better than the current Fortuner’s score of 403. No surprise that in real-world challenges, the mu-X stretches over axle twisters; which, to some degree, makes up for its lack of a rear locker. In most situations, the traction control’s limited-slip function kicks in, once activated by wheelspin.

Decent torque-delivery from the low-revving, old-school 3.0-litre turbodiesel makes climbing steep hills and loose rock pretty easy, even when running on highway terrain tyres. That said, and despite its 230mm of ground clearance, the mu-X isn’t designed “out of the box” for hardcore off-road duties. You will need to fit decent all-terrain rubber, and perhaps a rear locker, to compete in the extremely technical sections. Where it really shines is on badly corrugated gravel roads, and the rutted, potholed sections of tar that make up an increasing quota of southern Africa’s road networks.

No matter what the road quality, our mu-X was happy. Just understand its limitations, and it will make you happy, too. Thanks to its plush ride, masses of interior space, high levels of refinement and reliable underpinnings, it’s our view that the mu-X makes a case for itself as an accomplished long-haul overlander.

For a full spec sheet on the mu-X, click here.