Stronger, better, more capable. Is the Jimny all of this? A torture test at Honingklip sorts opinion from reality…

A cult, as defined by Google dictionary, is “a system of religious veneration and devotion directed towards a particular figure or object”. Few vehicles muster such appreciation amongst their fans, but the Jimny is one of them. Fortunately for the faithful, their deity hasn’t gone all soft like others have… (ahem, Discovery). Instead, it has been improved in every way, and been made tougher and more capable both on and off the road, while still maintaining its quirky character. That’s the story − and to prove it, we lined up a torture test for the little tyke at one of our favourite off-roading venues: Honingklip 4×4 near Bot River in the Cape.

Because, at a glance, it seems to be modelled on the old SJ410, the new Jimny can easily be confused with its forbear from the Nineties. There is no mistaking that boxy design and miniature dimensions. Take out a tape measure, however, and one finds that, compared to the previous coil-sprung Jimny, the new one is actually 50mm shorter, 45mm wider (for improved stability) and 20mm taller. Because the wheelbase is the same as that of the outgoing model, approach- and departure angles have been improved, too. 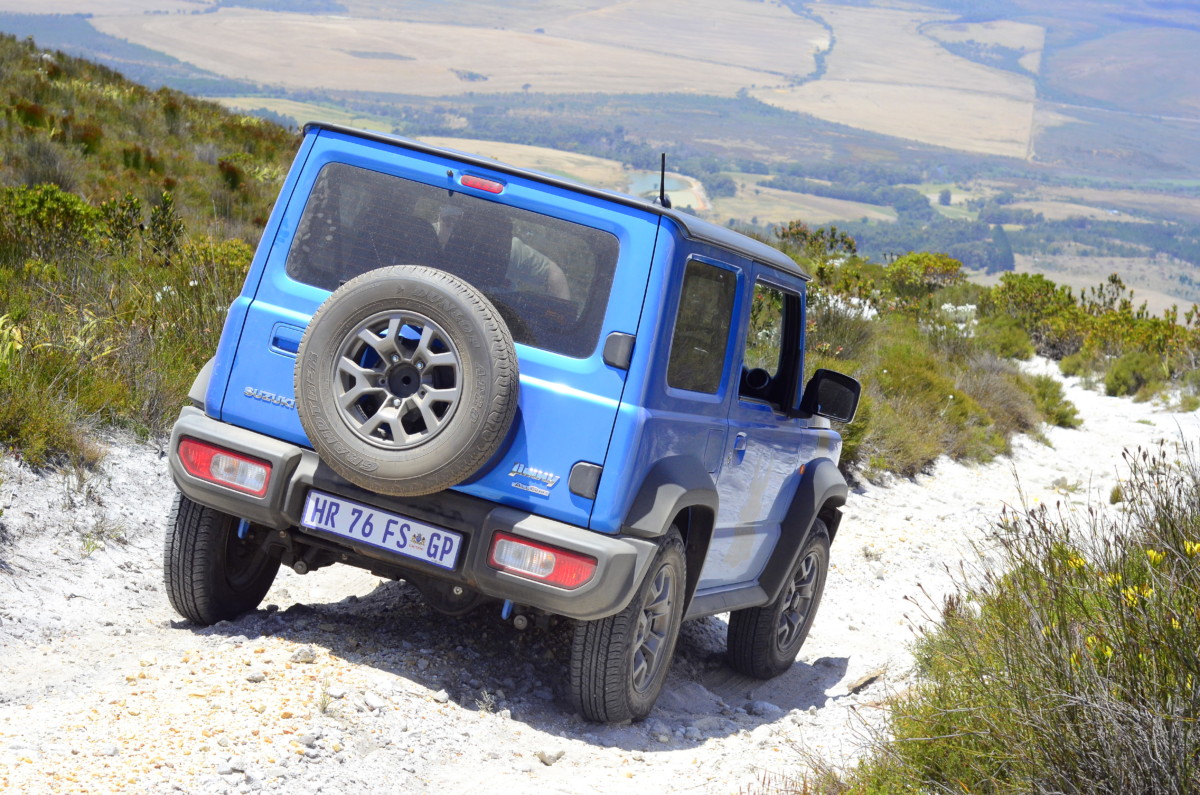 Suzuki says that the new flared wheel arches mean that you’ll be able to fit larger tyres than were available for the old one, simply because there is more arch clearance… although they wouldn’t mention specific sizes. Stock tread is 195/80 R15.

Base-model Jimnys are priced at only R266 900; but, for that, you won’t get alloy wheels, LED lights, or the funky paint options like our blue one here.

While the exterior looks retro, the Jimny’s interior is a huge step-up from the previous generation. On the plus side, it retains a classic horizontal-dash look like the old SJ410, as well as classic rocker switches, and a donkey lever for engaging the standard 4WD system. The latter is by far my favourite part of the new Jimny; it shows that Suzuki has paid attention to customer requests, and discarded the old electronic 4WD selection in favour of a hardy lever. 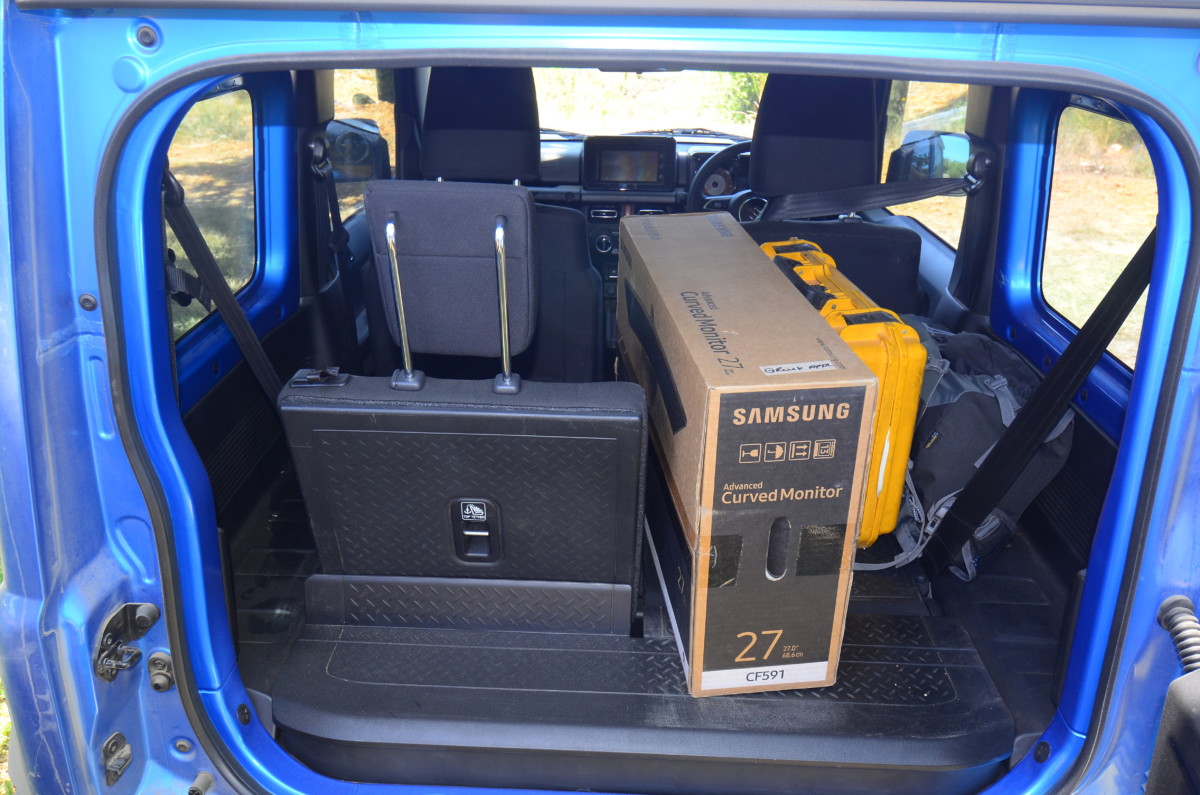 Both occupants in the front get airbags, the front passenger gets a very useful grab handle on the dash, and rear passengers can luxuriate in the extra 40mm of legroom − testimony to the excellent packaging of this admittedly small space.

The front seats are now wider and taller for added comfort, and the rears fold flat to accommodate luggage. The only debits I could find are that there is no parcel shelf available, and that the boot floor is made from slippery plastic, causing the three shoeboxes you’re able to carry to slide around.

A huge plus on the higher models is that a new interface has been included, with a touch screen and all the mod-cons necessary in this day and age. However, if you’d like to keep it simple, the base-model GA version doesn’t even have electric windows or central locking – it seems there is a Jimny for all duties.

Obviously, as it’s equipped with what appear to be bicycle tyres, the body of a Rubik’s Cube and only 75kW, the Jimny isn’t your perfect tourer… yet it did impress. The engine, alone, is worth the upgrade to the old Jimny’s 1.3-litre mill. The perkier new 1.5 allowed the auto (a four-speeder) to cruise comfortably at 120km/h with two passengers and luggage – something the previous generation would struggle with.

Refinement (and NVH – Noise Vibration and Harshness) has also been improved, as is the feeling of security along twisting mountain roads, despite a tendency for the tyres to squeal at road-test speeds. (Here, though, we were pushing the limits; wider rubber would up those grip levels.) As the Jimny is the same price as a Suzuki Swift hatchback, it has a bit of inbrand competition, although it works commendably as a frugal daily commuter if you have a little patience. Thanks to stability control, safety has also been greatly improved, and the Jimny now scores three stars in the NCAP safety test.

No surprise here… this is where the Jimny really shines. Although it is very similar in architecture to the old one, some key structural elements of the chassis have been upgraded. There is a new chassis cross member to improve rigidity; the strut towers, for example, are sturdier; and the solid axles have been reinforced. According to the expert eye of an engineer who builds aftermarket accessories for Jimnys, the entire chassis and critical stress areas appear beefier. 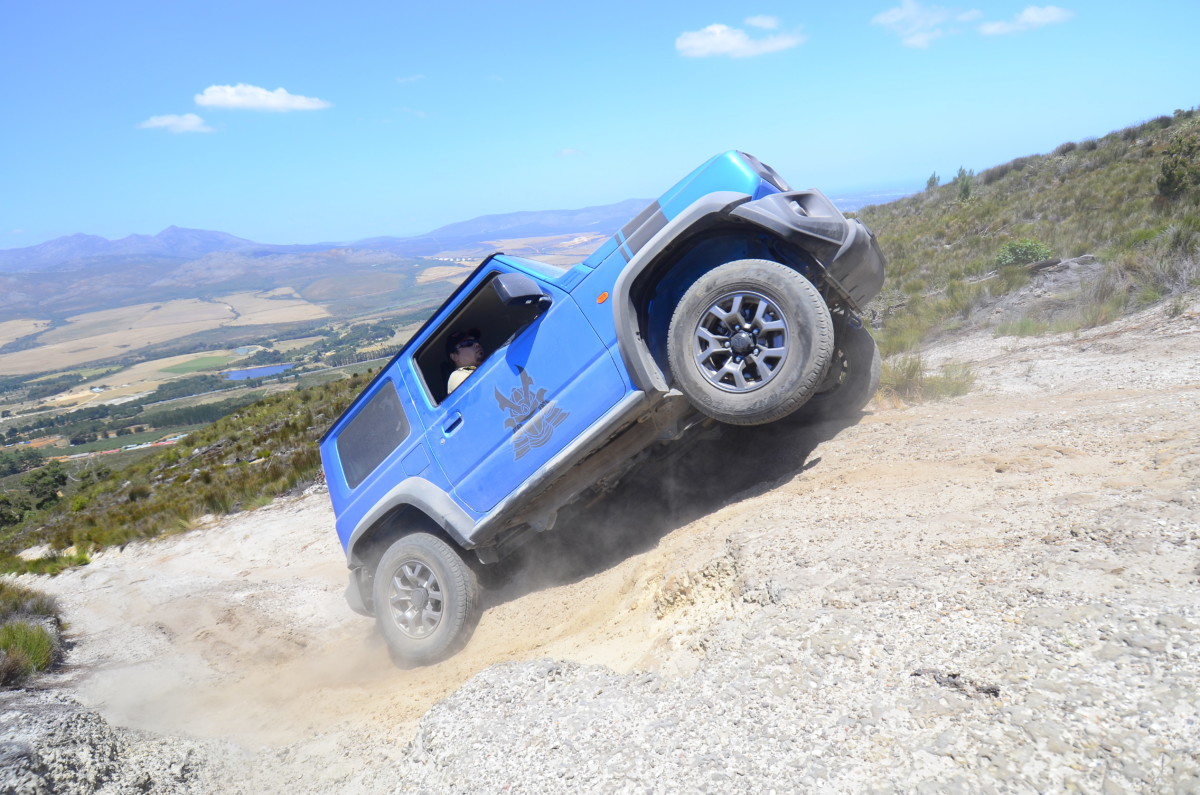 To keep all the wheels turning, the problem of the open axles of the old Jimny (its proverbial Achilles’ heel) has been addressed. A rather rudimentary − yet effective − traction control has been added. While it is not as effective as differential lockers in the hands of an experienced 4x4er, it worked well enough when climbing steep hills even when two opposing wheels had no traction – something that would be impossible in the old Jimny. It is ideal, then, for the average user who simply wants to avoid getting stuck when things get rough. Unfortunately, the system cannot be completely turned off, but didn’t interfere with sand driving too much, as there’s not much power to spin the wheels.

In very deep axle twisters and steep descents, one has to be careful with the Jimny. Because of its short wheelbase, it’s always willing to cock a leg despite decent articulation… and, as such, is unstable in deep holes where a longer vehicle may have fewer issues.

When going up the sort of long, steep, slippery hills that would see the old Jimny bounce off the limiter before bogging down to a stall, the new one has enough grunt to keep its wheels turning. This fact alone makes it far more capable. Add to that the almost preposterous approach, departure and breakover angles, and the Jimny is an absolute winner in the rough.

I can only imagine how fantastic it would be with a decent set of 31-inch tyres and a 50mm lift on it, at which point it would be hard to differentiate it from a quad bike with a roof.

For the money, there isn’t anything that even comes close to the capabilities of the new Jimny; and, as such, we’ve included only secondhand options in the “rivals” section of this report. Suzuki has hit the nail on the head with this one, and I’m sure that any buyers will be over the moon with their purchase.

For a full list of specifications, check out this story in the magazine itself.