TRICK OR TREAT?
At first glance the Prado TX appears to be an overlander’s delight, a stripped-down upmarket SUV solely designed for the off-road traveller. But is it really a better buy or a ploy to coax status-conscious off-roaders into the Prado den?

This road test is long overdue and it’s entirely my fault. I could’ve tested the VX shortly after its launch, but I put it off because I figured that more of you would be interested in reading about the no-frills TX model which made its appearance a short while after its more larney sibling.
But despite constant nagging on our part, we were never able to get a TX to test; we finally discovered that the only TX test unit had been trucked back to Joburg and it wouldn’t be returning to Cape Town. So before the TX could slip even further from our grasp, I booked the first flight north. I ended up driving the Prado from Joeys to the Serendipity 4×4 trail in Limpopo province. (Ed: See Grant’s trail review in our August issue.) 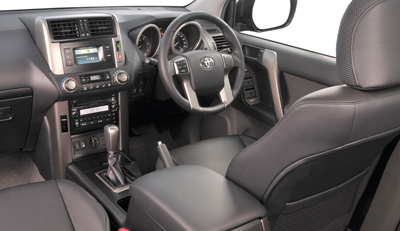 INTERIOR
Here’s where the differences lie. The Prado VX offers things like satellite navigation, cruise control, a multitude of onboard cameras, centre console cooler box, auto windscreen wipers, DVD player, seat warmers, privacy glass, heated mirrors and dual-zone automatic climate control, to name but a few.
The Prado TX has considerably less. But here’s the funny thing: the cabin still feels VX, to the point that after climbing into the vehicle for the first time, I immediately climbed back out to check the badge on the rear because I thought they’d given me a VX in error.
The trim, the materials, the leather and the build quality all feel very VX. It’s only when you start looking for the little extras like cruise control that you realise you’re in the TX. Happily, you soon grow accustomed to this ‘featurelessness’ and soon realise those fripperies weren’t that important anyway.

EXTERIOR
Have you ever nuked a marshmallow in a microwave? It’s like a scene from sci-fi horror movie: it swells up to several times its size and then starts bubbling and popping as though dozens of baby aliens were trying to fight their way out from its gooey centre. At that point, right there, just before the alien critters break through, that’s when I’m reminded of the Prado. What a formless blob. It’s like the compact ugly version of the LC200, which ain’t no beauty pageant winner itself.
And no, no amount of time will let this shape “grow” on me. Fair enough, I accept that my opinion is just my opinion, but I’ve spoken to several owners of the new Prado and they’ve all said the same thing, “It’s an ugly 4×4 but…”.
On a separate note, if you want to know how to differentiate the VX from the TX check the front bumper for the integrated fog lights; if it hasn’t got any, you’re looking at the TX. Besides that, there are few external differences between the two models.

OFF-ROAD
The previous Prado was an oft unappreciated 4×4, overshadowed by its Cruiser siblings. I recall a Land Cruiser gathering I went to some years back. The club laid out several tight obstacles which had to be completed against the clock; for much of that day the Prados dominated the competition, making the bigger Cruisers look cumbersome and unwieldy. And what I learnt that day is that many diehard fans don’t regard the Prado as a pukka Cruiser, but rather as a distant cousin to the brand.
The latest Prado looks way bigger than its predecessor and I first thought, “Well, there goes its agility”. However, I was surprised to find that the new model is only 45 mm longer and 10 mm wider. 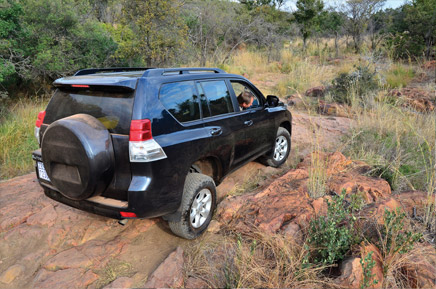 For me, the Prado’s manoeuvrability is one of its most commendable off-road traits; it’s no Suzuki Jimny, but for a seven-seater SUV that appears grotesquely large, it’s commendably nimble.
Another praiseworthy feature is the Prado’s axle articulation. Unlike the VX model, the TX isn’t fitted with a rear diff-lock but thanks to great rear axle articulation the Prado seldom lost traction on our test trail. Come to think of it, it never lost traction at all – so I can’t rate the traction control system.
But things are a little mixed up where clearances are concerned; the approach and departure angles are workable at 35° and 25° respectively and ground clearance is reasonable at 220 mm. However, at 18° the break-over angle is definitely a sticking point and on many occasions we scraped the Prado’s undercarriage. Luckily, we’d removed the OE running boards before conducting our off-road test; if we hadn’t, they would’ve bent out of shape.
The Prado offers a comfortable ride on gravel and when you combine this feature with its versatile tyre size (265 / 65 / 17) and phenomenal fuel tank capacity (150 litres) it appears to be the perfect overland vehicle, one which doesn’t require huge expenditure on aftermarket add-ons and overland kit.

ON-ROAD
The TX boasts two engine options, the 4.0 V6 petrol and the ever faithful 3.0 D-4D. The 3.0-litre diesel motor is an uprated version of the one fitted to the Hilux and Fortuner models. Installed in the Prado it produces 400 Nm as opposed to the Hilux’s 343 Nm. But even with this mild performance tweak, it’s not enough.
I’m a huge fan of the D-4D engine. It works very well in the Hilux, but installed in the Prado, the motor feels underpowered. The vehicle isn’t slow to the point that you want to bang your head in frustration, but for an SUV priced at over half a million rand it feels too pap.
However, there’s a plus side to this diesel, and that’s good fuel economy. We recorded a consumption reading of 10.5 l / 100 km on a combined cycle – urban, freeway and off-road use. And if you nurse the D-4D on the highway you could see that figure drop down to 8.5 l / 100 km, which when coupled to the TX’s 150-litre fuel tank will give you an exceptional range of 1 764 km.
A 5-speed automatic gearbox is the only transmission option available for both models, petrol and diesel. In the diesel’s case I found the gearbox to be unintuitive and slow to downshift when the extra engine speed was clearly required.
The Prado’s ride comfort is great, but there’s bodyroll and understeer through tight turns, more so than in other vehicles in the same price range. Fortunately, the Prado’s ESP works well and I can testify to its effectiveness by the fact that I’m still alive… it saved my bacon.

CONCLUSION
The Prado taught me an important aspect of vehicle ownership: looks are forgivable. And at R571 500 there isn’t much that competes with the TX; if you’re looking for a generously comfortable, capable 4×4 (with low-range) you’re going to be hard pressed to find better value below R600k – particularly where diesels are concerned.
If your heart’s set on a diesel and your budget can stretch to R580k you can consider a Pajero 3.2 D-ID or possibly a Pathfinder 2.5 dCi but unlike a Prado neither vehicle will offer the same executive standing among your peers and golfing buddies.
However, with its limited spec list, one can’t help but consider another player, the Fortuner. There aren’t too many differences between the Prado TX and a Fortuner diesel AT. They both have seven seats, an auto box, traction control and for the most part exactly the same engine. But the Fortuner is R132k cheaper, and it boasts a rear diff -lock and AT tyres. In this comparison, the only noticeable plus point for the Prado TX is its 150-litre fuel tank and the status that comes with the Land Cruiser badge…