Home » Out with the old, in with the new

Words and pictures by Bridgestone SA. 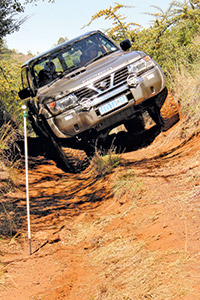 How does this new format work? The competition has been placed in the hands of South African off-road clubs, giving several prominent SA clubs the opportunity to host an internal event. The top three performers of each club challenge will then have a chance to take part in a final Bridgestone event at the end of the year.

The first ever Bridgestone 4×4 Club Challenge was organised by the Suzuki Auto Club, and took place in February this year at Leeuwenkloof, just south of Hartbeespoortdam. 30 vehicles took part: the majority were Jimnys, but several of Grand Vitaras were also in attendance, with a couple of older models present, too.

The first obstacle wasn’t really a traditional 4×4 obstacle at all; instead, entrants were eased into the action by having to venture into one of Leeuwenkloof’s caves, retrieve a Bridgestone 4×4-Club-Challengerelated question, and provide a marshal with an answer. This might not have been the sort of challenge that competitors were expecting, but it was nevertheless worth valuable points, and some entrants managed to snatch some useful points early on.

The first proper 4×4 obstacle was a steep, winding ascent up a rocky hill. At first glance, the obstacle seemed simple; but thanks to loads of loose dirt, rocks and grass, many vehicles failed to find the traction needed to complete the obstacle, and had to stop and roll back for a second charge.

Of course, some vehicles cruised through: Raymond Martin and Stefan Griesel in their appropriately named Zuk-Zilla charged the hill with a healthy dose of momentum, reaching the summit with ease. The third obstacle was a short climb up a rocky track. Not particularly challenging, so what was the catch? The co-driver of each vehicle was tasked with keeping a water-filled bucket suspended from a pole outside the vehicle’s window. Once done with obstacle three, competitors moved on to obstacle eight, which consisted of another steep climb. The change in order was to give some of the wetter parts of the track time to dry out. This obstacle presented an ugly axle-twister. Choosing the correct line was crucial, especially since many of the vehicles didn’t have a rear diff-lock, leaving them no choice but to charge the hill.

Thanks to an aftermarket rear-locker, Raymond Martin and Stefan Griesel’s Zuk-Zilla once again sailed through. Danie Tait and Liaan Fourie’s Samurai “Mongoose” also performed admirably, lifting its wheels dramatically through the axle-twister, but making it through without incident. Obstacle nine, the final obstacle, was basic. All it consisted of was a short track around a tree. But, of course, there was another catch: drivers were blindfolded and had to rely on their codrivers’ instructions. Here competitors performed very well, with the majority scoring maximum points.