I was staring at the brand-new ‘longloan’ Mazda BT-50 parked in front of our offices. I was daydreaming. The RTI canopy with the side-hatch kitchen had just been fitted. On top was an aerodynamic Alu-Cab rooftop tent, and on the side, a 270-degree Shadow Awning, also from Alu- Cab. How the hell was I going to get my claws on this lovely beast?

The ringing of my phone shatters this line of wool-gathering. “Can you get hold of that new 4×4 that you’ve been bragging about?” It is Johan de Waal, a mate of mine from Port Nolloth. He and his wife Magda run Richtersveld Tours, operating out of that small seaside dorp on the Atlantic. “Join us; we’re going on that mountain-bike trip we’ve been talking about.” Johan and I have been mates for over a decade, and part of the friendship is our joint incurable addiction to the Richtersveld.

The idea of exploring and camping with the Mazda in the less-well-known Richtersveld Conservancy Area is music to my ears, and to the editor’s, so it isn’t long before I have a set of keys in hand and a plan of action.

I idly wonder how many times I have driven the 700-odd kilometres from Cape Town to Port Nolloth. I love the drive up the N7 before turning west at Steinkopf onto the R382 to Port Jolly. I arrive in one of those dense cold mists that often roll in from the cold Atlantic, enshrouding the dorp. The locals call it a malmokkie. It’s this cold mist that provides the vital moisture for the miraculous plant diversity in this harsh environment.

I don’t even have to try out the Alu-Cab rooftop tent − Johan and Magda have given me my familiar Room No 4. I fall into a dreamless sleep with the haunting sound of the foghorn in the background.

When I step out the next morning, the yard looks like an army battalion on the move. Knowing my penchant for talking nonsense, Johan tactfully suggests that I head out to the Tierhoek camp. “Boela and his mate Marné have been putting up the tents, toilets, showers and goeters for the last two days. He has to go out and put up the first day’s route markers, and you could join them.” Fifteenyear- old Boela is Johan and Magda’s eldest son. My expression must be quizzical, as Johan gives me one of those looks.

“It’s easy. Just look out for an old rooi Kombi on the long stretch after Lekkersing on the way to Kuboes… that’s your marker. You turn left at the Kombi. There should be markers showing the way to the camp at Tierhoek.”

Actually, I don’t care if I get lost. I have a tank full of juice, I’ve got grub, a state-of-the-art kitchen that’s part of the RSI kit, plenty of beers, a rooftop tent and my Woolies down-duvet and pillow. And, having got used to my old Landy Camper’s top speed of 80 kilometres per hour, I’m feeling really spoilt. It’s great fun driving on the sandy corrugated road to Lekkersing, and I can’t miss the mysterious red VW standing out there in the middle of nowhere. The corrugations should be shaking my molars loose, but the BT-50 cruises over them without spilling my mug of coffee. 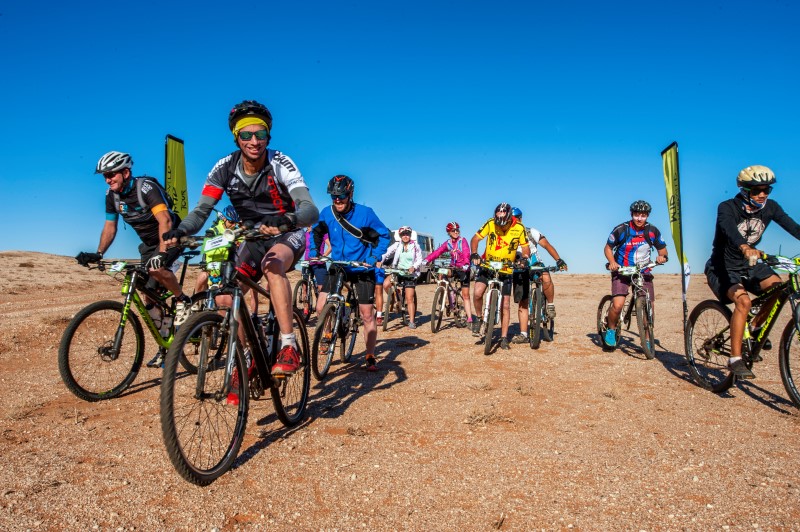 The Richtersveld World Heritage site MTB Tour takes place in July every year over five days, of which three are riding days needed to cover the total distance of 110km.

Maximum of 25-30 people to keep things personal. A back-to-back tour is possible if booking numbers exceed this.

• Transfers to and from Port Nolloth to the Wilderness camp
• Three meals a day during the tour; dinner of the first day and a final breakfast
• Camp fees plus a tent, mattress, blanket and pillow
• Toilets and warm bush showers provided at the camp
• Medical and technical support on the tour, plus water points and snacks every 10km

Johan and Magda de Waal run their Richtersveld Tour Company from Port Nolloth in Namaqualand. This was the first of what they hope will be many more mountain-biking tours in the Richtersveld.

To make your own bookings in this World Heritage region, contact area manager Gert Links.