Clichés can come in various forms, but more often than not they stem from a modicum of truth. And in the context of the red Samurai here, dynamite does indeed come in small packages.

Bought in 2013 as an el-cheapo project car, Hendri Mouton’s SJ413 ‘Zombie Response Vehicle’ quickly got out of hand, becoming an all consuming passion for the young engineer in training. As with many projects, this one will likely never be completed. Call it a constant work in progress. 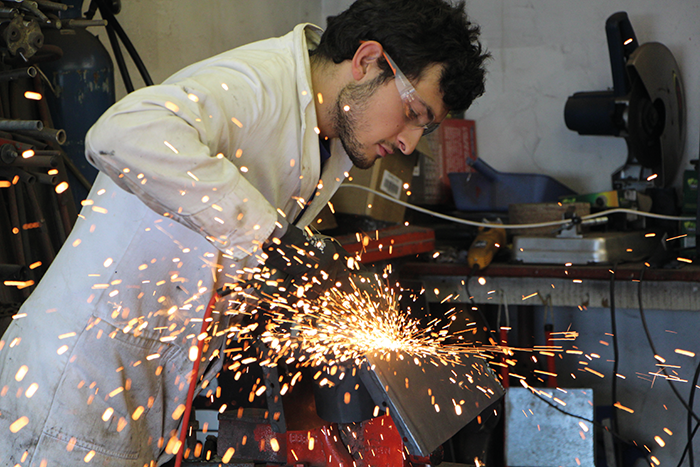 I have known Hendri for a while now, and it’s clear that he’s a perfectionist – at least when it comes to his vehicles. And, instead of building his 4×4 the easy way, he’s stuck to the mantra that if you want something done right, you’ve got to do it yourself.

This mantra goes for every little detail around the vehicle, including multiple home-designed and laser-cut zombie emblems, interior switchgear and the front bumper.

The front bumper is of particular interest, having been designed on CAD, then laser-cut by an engineering shop and hand-welded by Hendri. 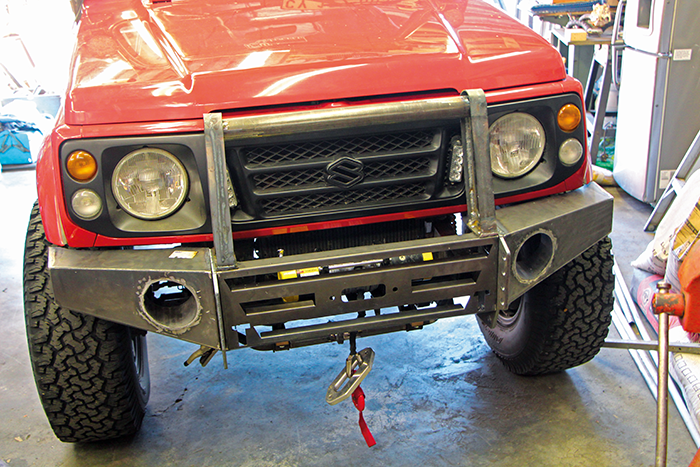 It is a three piece modular unit (so damaged pieces can be replaced) which sits flush with the Samurai’s bodywork, despite a body lift. 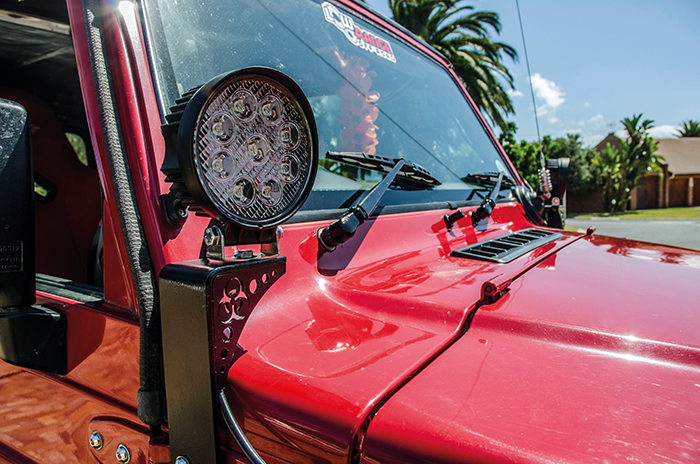 Indicators all round, as well as the brake lights, have been replaced with LEDs − which look awesome, and are much brighter than the stock units.

As the Samurai is more plaything than overlander, the rig has been built for max attack off-road; but, as it comes stock with a puny 1.3-litre engine, it soon became apparent that turning a set of 31- inch muds could be problematic. For this reason, Hendri went hunting for a bigger engine.

A 1.8-litre turbo Golf GTI motor was a possibility, and even a powerful old-school Ford Sierra 3.0-litre V6 would have fitted nicely, but both were sacrilegious. Only a Suzuki mill would do.

An original 1.6-litre eight valver from the old Vitara was chosen and sourced, based on the realistic principles of its simplicity, ease of modification and low cost.

Also, thanks to its being exactly the physical size of the original engine, no new mountings would have to be made.

Hendri’s initial intention was to leave the 1.6-litre lump stock, but that silly notion was quickly scuppered by the thought of supercharging and getting a whole lot more out of the modest original. And so, a long process was started… 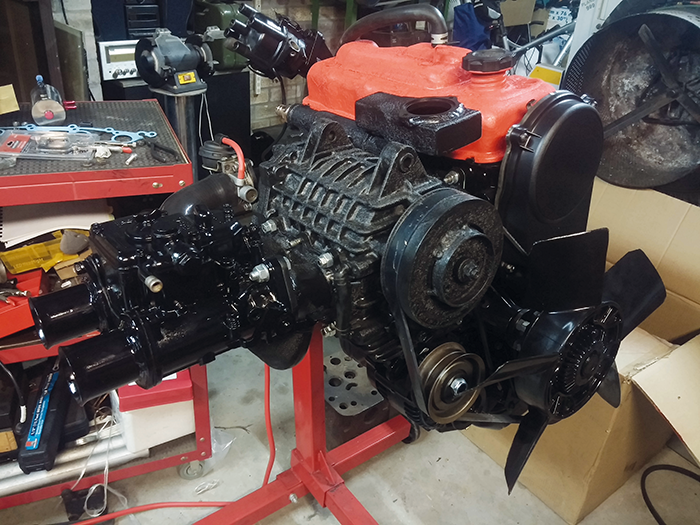 The supercharger itself is an Aisin screw type, running 0.6 bar, fed by Weber side-draught carbs and a custom-made intake manifold.

The header pipes were fabricated in Hendri’s garage using Schedule 40 pipe − bent and welded together with great accuracy.

Supporting mods to deal with all the boost include forged con-rods, a 272-degree camshaft and a gas-flowed head.

With the blower installed and functioning as it should, the result is around 100kW, with, says Hendri, enough torque to “snap some chopsticks”.

Of course, with all the added power, the drive train takes a hit, but Hendri has opted to wait and see how long that lasts, and to upgrade any components when, or if, they eventually crack under pressure.

For now, the next modification is to increase the reduction ratio by combining the gearing from an earlier Suzuki SJ410 with that of his original SJ413.

In the Suzuki conversion trade this is known as the ‘Rock Lobster Conversion’, and will apparently result in an 85% increase in the reduction ratio, enabling much slower crawling and less stalling.

This upgrade, combined with a rear auto locker and the added low-down grunt of the upgraded engine, should make Hendri’s Samurai near-unstoppable.

After that, he is aiming for more wheel articulation, which is likely to involve replacing the current front-strut system with a four-link system similar to that used on modern Jimnys. Right now, though, this mod is still in the imagination phase of development.

As the vehicle sits today, every detail is perfect, from paintwork on the rock-sliders to the engine cover, but she’s the furthest thing from a garage queen.

Used almost every weekend to embarrass a Rubicon here or a Land Rover there, this David in a world of Goliaths is testament to the notion that you don’t need to be large to have a good time. 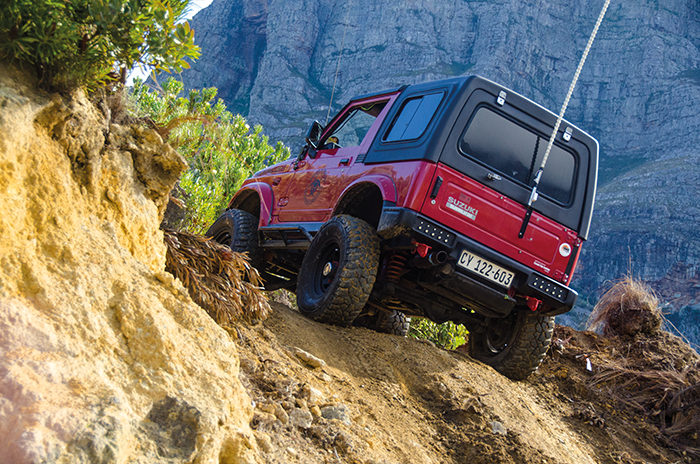 Our friend Werner came along for the ride, and he’s taken a completely different approach to building up his off-roader.

While Werner’s rig may not be the prettiest in every detail, it goes to the top of the scale on the madness factor.

With a 10-inch lift, 31-inch BFG muds and a 3.0 V6 Ford engine, the green goblin grabs attention everywhere – with responses both good and bad.

Under an early SJ body rests most of an old SFA Hilux drive train, with steering componentry mashed together using welded lengths of rebar and hopes and dreams.

The rig is designed to be abused, crashed, and ramped over whatever obstacle stands in its way without a thought spared for mechanical sympathy. It’s simply brilliant: the essence of fun. 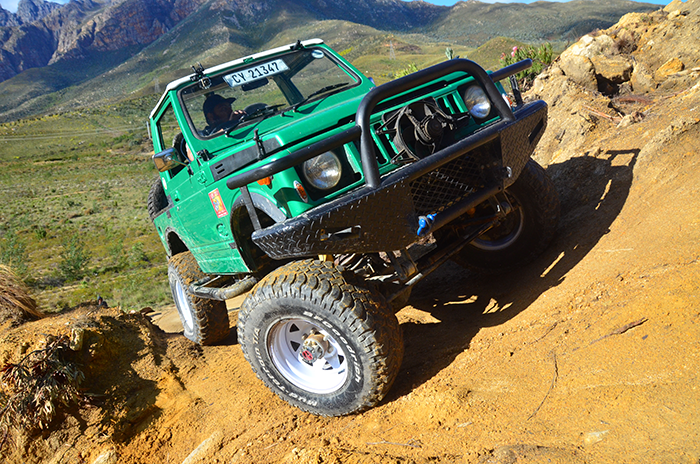