When the owner of this “Big Daddy” of overlanders took his dream ride for its first shake-down trip to a resort near Brits for a weekend of quiet camping, he was in for a big surprise.

The sheer scale and obvious luxury of his larger than life ride attracted a crowd of 150 to 200 fellow campers, who all wanted to climb in and take a look around, before they told their friends about this epic home on wheels. 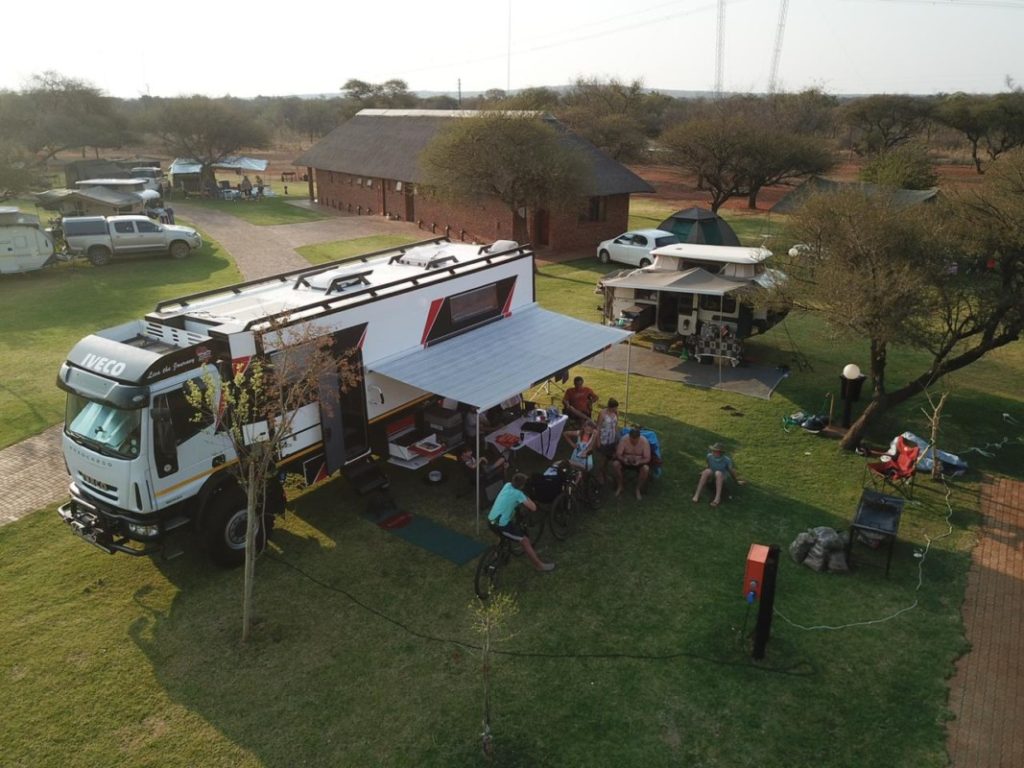 The camper itself is built on an Iveco Eurocargo 4×4 truck chassis, and the camper section alone is 10 metres long. It’s a project that has emerged from the Meyerton workshops of Custom Campers, a business that’s run to extremely high standards by Fred Oosthuizen.

What we can say, is that the motorhome’s owner is a hard-working businessman called Michael, but he prefers to stay under the radar – and now you know why. I guess after the crowds, Michael and his wife wanted nothing more than to fire up the Iveco’s six-cylinder turbodiesel and head for more remote hills…

We had a brief chat together, and if you’re thinking that these are people with more money than sense, and who have never camped before, you couldn’t be more wrong. “We started many years ago in an ordinary dome tent. All that we actually had, was the tent and a cooler box,” says Michael.

“After tent-camping in Botswana, Namibia and Mozambique, we started looking for something a bit more comfortable, and later moved on to a rooftop tent.”

But, all the while, Michael and his wife dreamed of the ultimate overland truck. “We watched Discovery Channel for years, looking at the ultimate overland adventure vehicles being built overseas,” he laughs. “We stole with our eyes, and in the meantime, worked like Trojans to save up for our dream home on wheels.”

After saving for years, and with a firm idea of what they wanted, they finally approached Custom Campers. Michael tells me that from the get-go, he was on the same page with Fred on key aspects of the build

“Fred and the team knew exactly what materials were best for the construction, and together we planned to have able to carry 550 litres of diesel: enough fuel for 2500 kilometres.”

Custom Campers fitted the fuel and water tanks in the middle of the truck, which offered a low centre of gravity and added to good weight distribution.

Of course, the interior is a work of art. Just for starters, the mattress is the best available, there’s a trick Snappy Chef double plate induction cooker in the galley, a reverse-osmosis water filtration system, and an enclosed shower.

In fact, there’s enough water on board for fresh drinking water and showers for up to two weeks of off-grid living. The perfect set-up for the overlander.

To round things off, the couple had the Custom Campers team design a five-star entrance lounge that morphed into a really comfortable double-bed. The truck also has a fully-kitted inside and outside kitchen unit.

It’s a big truck, but Michael tells me it cruises comfortably at between 100-110km/h. One thing we were surprised by is that lack of cab-to-cabin access. When I asked why, Michael explained: “The first and most important thing is this: the moment you mess around with or cut access to the camper section, you lose your guarantee… added to that, one often gets dust ingress through the concertina rubbers perishing over time.”

Another fascinating feature is the state-of-the-art hoist at the rear of the Iveco. This is custom made with its protection cover to house a BMW GS 1200 motorbike.

I could go on and on, but I hope my pictures will tell the story and show what an incredible job the Custom Campers team have achieved with this magnificent beast.