As fate would have it, I happened to take the all-new Q8 on an adventure at the same time that the Cape was preparing for one of the worst storms of the year. Back in Cape Town, businesses were sending staff home early, and doors and windows were being sealed shut in anticipation of the violent winds and heavy deluge to come. 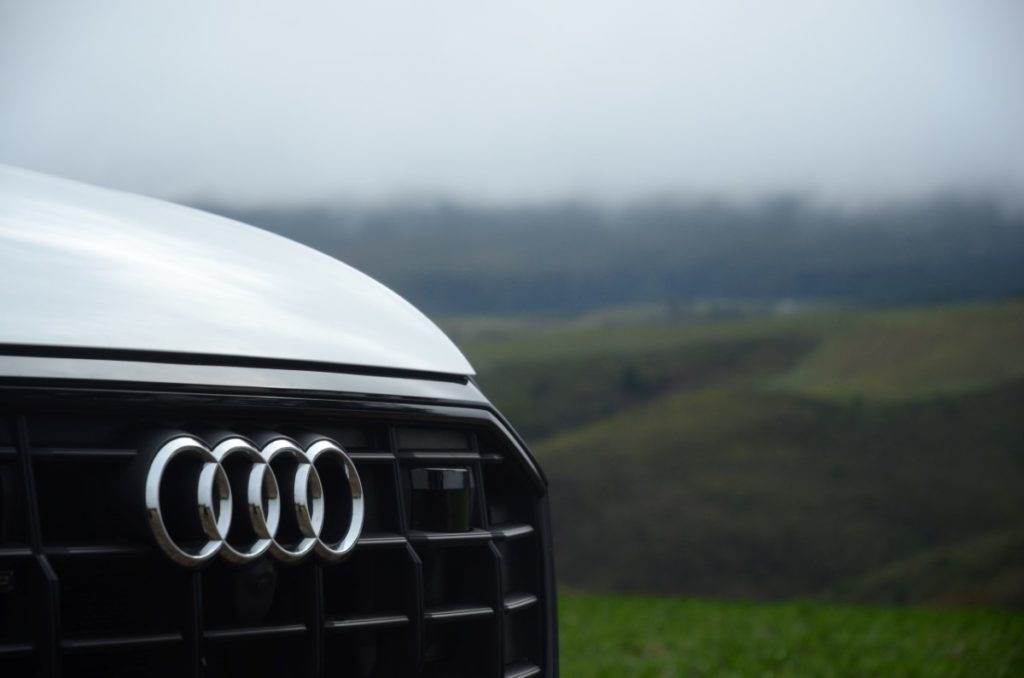 Meanwhile, I was charging along the R60 between Worcester and Robertson, enjoying the assured purr of Audi’s unfaltering 3.0-litre V6. In the Q8, Audi’s new flagship SUV, this twin-scroll turbopetrol puts out 250kW and 500Nm, distributing that brute strength to all four wheels via an eight-speed Tiptronic transmission and Audi’s quattro four-wheel-drive system.

That’s not all, though. A clever 48V power source draws energy when braking from a belt alternator-starter, and uses it to charge a lithium-ion battery that feeds back into the drivetrain when coasting, giving the V6 a breather and reigning in the Q8’s substantial thirst by a claimed 0.7 litres every 100km. In Efficiency Mode, the accelerator pedal gives the driver a gentle nudge when the car is ready to coast. The result is a claimed combined fuel consumption of 9.1l/100km, although our runs –admittedly fully loaded – returned a figure closer to 12. 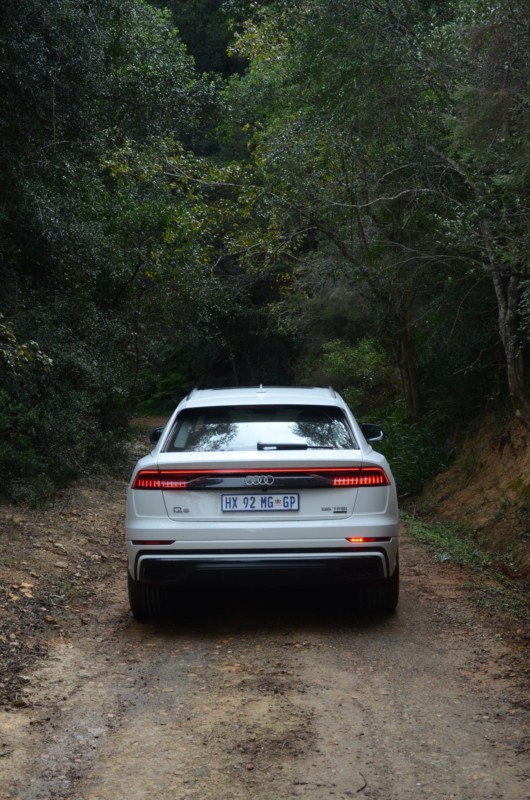 The idea of an SUV-coupé crossover still befuddles many ardent car enthusiasts, but Audi has taken its time to produce an X6 and GLE Coupé rival to complete the unholy trifecta of Teutonic ‘sports activity vehicles’. The result is a poised, powerful and luxurious family car with splashes of racing pedigree scattered throughout its design, both inside and out. There are obvious references to the original ‘Ur-Quattro’, like the conjoined taillights.

The Q8, like the Porsche Cayenne, Volkswagen Touareg, Lamborghini Urus and Audi Q7, is developed on the VW Group’s MLB-Evo platform, but, as expected, it has traded some functionality in favour of form. There are only five seats, and the boot volume has been withered away to accommodate the sloping tailgate. Regardless, we managed to comfortably fit five people and their luggage, food and hiking gear for a weekend away.

The Langeberg mountains and their gravel roads posed a challenge for the Q8’s 22-inch S-line wheels and low-profile tyres, but by engaging Offroad Mode, I was able to boost ride height by 50mm and gear the air suspension towards handling any stray rocks lining the roads. Again, in tribute to the Ur-Quattro, the Q8 has been designed with off-road ability in mind, so the overhangs are short. Through mud, shale and slippery concrete, the Q8 excelled and proved once again that this class of luxury SUVs is capable of comfortable gravel travel.

Despite the tyres having been well-worn by the previous testers of the car, it still shined on the windy, cambered tar of Route 62, maintaining poise and minimal body roll around sharp bends, with an incredibly responsive steering setup belying its artificial nature. While I’m quite used to having my sister-in-law beg me to slow down on these road trips, I found that the Q8 had converted her into a fellow speed demon, much to the chagrin of my long-suffering brother.

A lot of that poise comes down to the four-wheel steering option, which is fitted to this test unit. Combined with clever torque vectoring, controlled dampening, and a long wheelbase, it’s a handling setup that’s easily a match for the sporty SUV rivals.

Refinement extends to the design, which is polarising, but certainly head-turning. The front end is considered overly-aggressive by some, and sufficiently sporty by others, but the overall look of the car is certainly pleasing. The dynamic LED headlights and tail lights can put on quite a show at night, too. With South African roads somewhat saturated with Cayennes these days, the Q8 takes the cake as the current SUV coupé of choice for anyone looking to stand out.

That’s quite unlike Audi, a manufacturer respected for its understated designs. The interior, however, is what you’d expect from the Ingolstadt marque. Every detail is immaculately manufactured, featuring plenty of technology and convenience without skimping on cabin space. With this S-line package, the door sills, leather seats and flat-bottomed steering wheel are embossed with the Audi S logo, while the ambient lighting inside can also be changed to suit your mood.

A lot of fuss has been made of the new dual-screen MMI infotainment system, with the 10.1-inch main screen conveying media, navigation and vehicle information, while the 8.6-inch screen below is used almost exclusively to control the four-zone climate control system. To allay fears from those used to the tactile feedback of physical buttons, the touchscreen requires a substantial press, providing haptic feedback in return. It takes some getting used to, but it’s an excellent attempt at eliminating cabin clutter, and a top-tier media/navigation setup.

Passengers can enjoy the convenience of a wireless phone charger and four USB ports, as well as climate controls in the rear. The driver benefits from a feature-packed virtual cockpit, as well as the option of a heads-up display in the dashboard. Driver assistance on this test unit included night vision, adaptive cruise control, lane-keeping assist, and the full suite of parking sensors and cameras, plus all the standard safety features you’d expect from a car of this calibre.

So where does the Q8 fall short? Despite the assistance of the 48V system, acceleration is still laggy in stop-start situations, meaning the car feels best suited to the long road. Pricing is also slightly alarming – for less money, you could have a Porsche Cayenne with the same engine, albeit with fewer standard features (see below). Audi’s new philosophy is to spec higher, and create useful feature clusters with their trim packages.

From an off-roader perspective, the Q8 isn’t going to climb any 4×4 trails without significant damage, but driven with regard to those oversized rims, it will handle a gravel road or two without trouble. Perhaps the upcoming 45 TDI variant will offer better wheel options, but that’s unlikely.

Nevertheless, by biding its time, Audi has created something quite special and in a class of its own, if only because we eagerly await the next generation of X6 and GLE Coupé, as well as the impending local launch of the Porsche Cayenne Coupé. 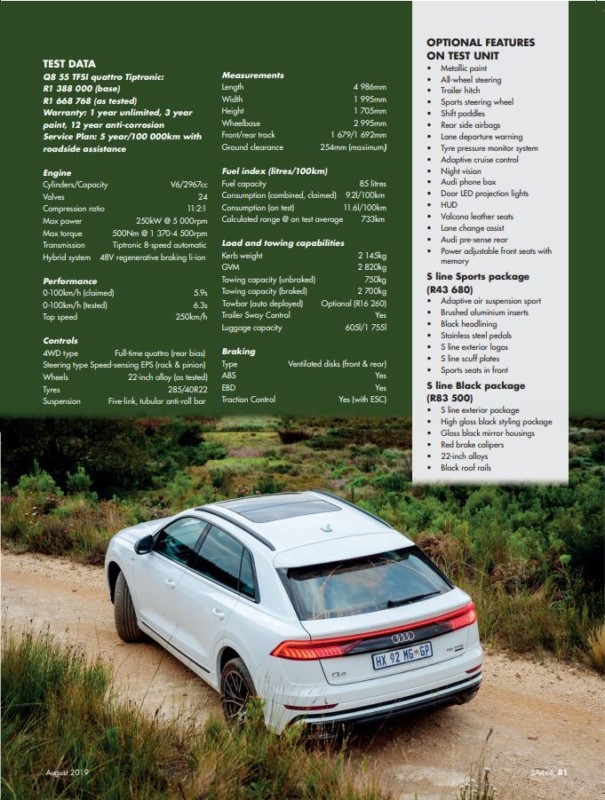