Maserati’s super-SUV has been its best seller in recent times, and with the global shift towards spacious family vehicles in full swing, it’s not hard to understand why the Italian stallion is doing so well. We spent some time with the range-topping Levante S to see what all the noise is about.

The supercar SUV trend is inescapable. Soon, we’ll have the new Lamborghini Urus cruising through Camps Bay and Sandton, and it won’t be long before Ferrari follows suit. All the while, Maserati will have been quietly churning out Levantes from its Mirafiori production line in Turin.

With coupe curves and wheels that look as if they were forged by Neptune himself, the Levante S is a serious work of art. At just over 5 metres, it is very, very long – longer than the Porsche Cayenne – but it’s no boat. The imposing grill, tapering front end and signature rear pillars make it unmistakably Maserati, and with the GranSport trim pack installed, there’s plenty of extra bling to let people know who’s boss.

In contrast with the more luxury-orientated GranLusso package, GranSport features bright red Brembo brake calipers, a black grille and 20-inch Nereo wheels. The flashy black paint job may be tough to photograph, but its glitter-strewn body is dazzling up close. 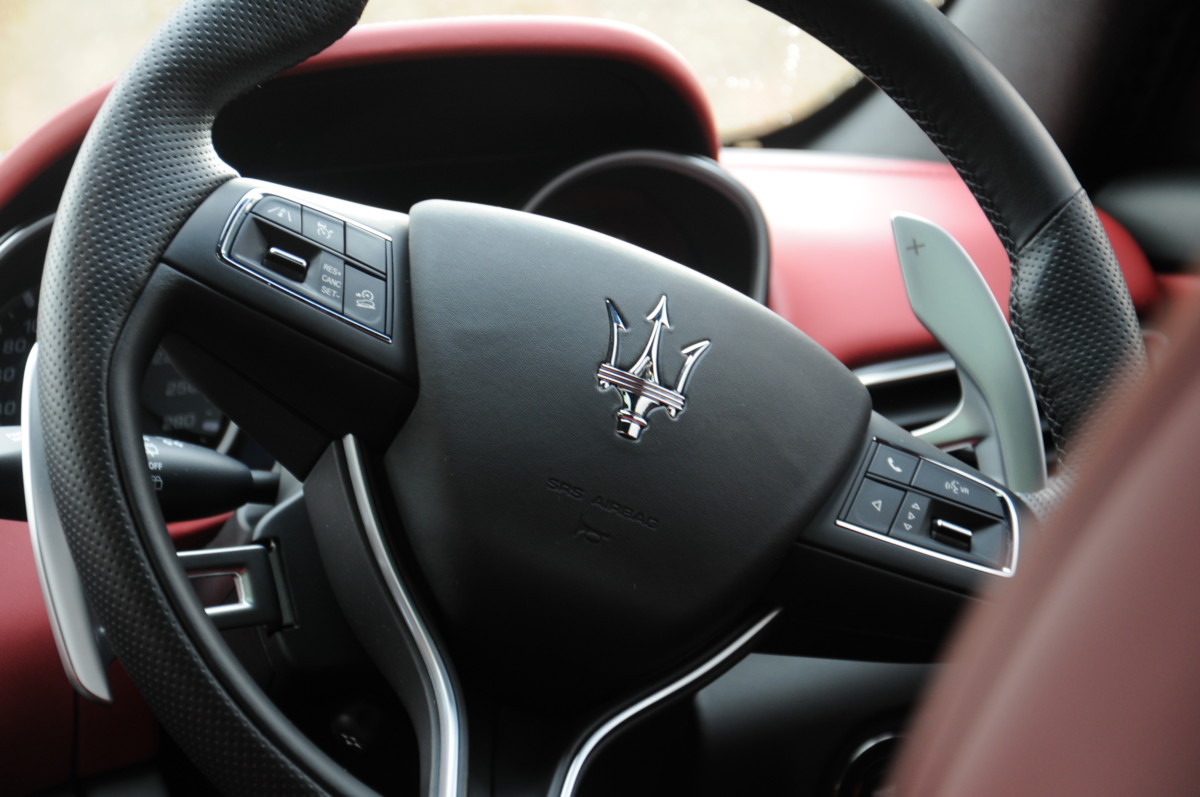 Inside, the Italian supercar is all class – the trimmings and finishes are immaculate, as you’d expect from a vehicle with this pedigree. The infotainment system is kitted-out with all the best bells and whistles, like satnav, Apple CarPlay, and hi-tech safety features like a 360° parking camera. To top that, driver assistance systems include Highway Lane Assist and Adaptive Cruise Control with radar-assisted stop & go. The list goes on and on…

When the diesel Levante reared its gorgeous head a couple of years ago, it was called sluggish, quiet, and unworthy of the Triton. In response, Maserati launched the Levante S, a 3.0L V6-powered, bi-turbo petrol wildcat with that unmistakeable Maranello roar, and developing 316kW and 580Nm. The Ferrari-manufactured powerhouse is mated to a sensually-smooth 8-speed ZF automatic transmission. The Levante S can break through the 100km/h mark in just 5.2 seconds, and will top out at 264km/h. Remember: it’s an off-road-capable SUV! 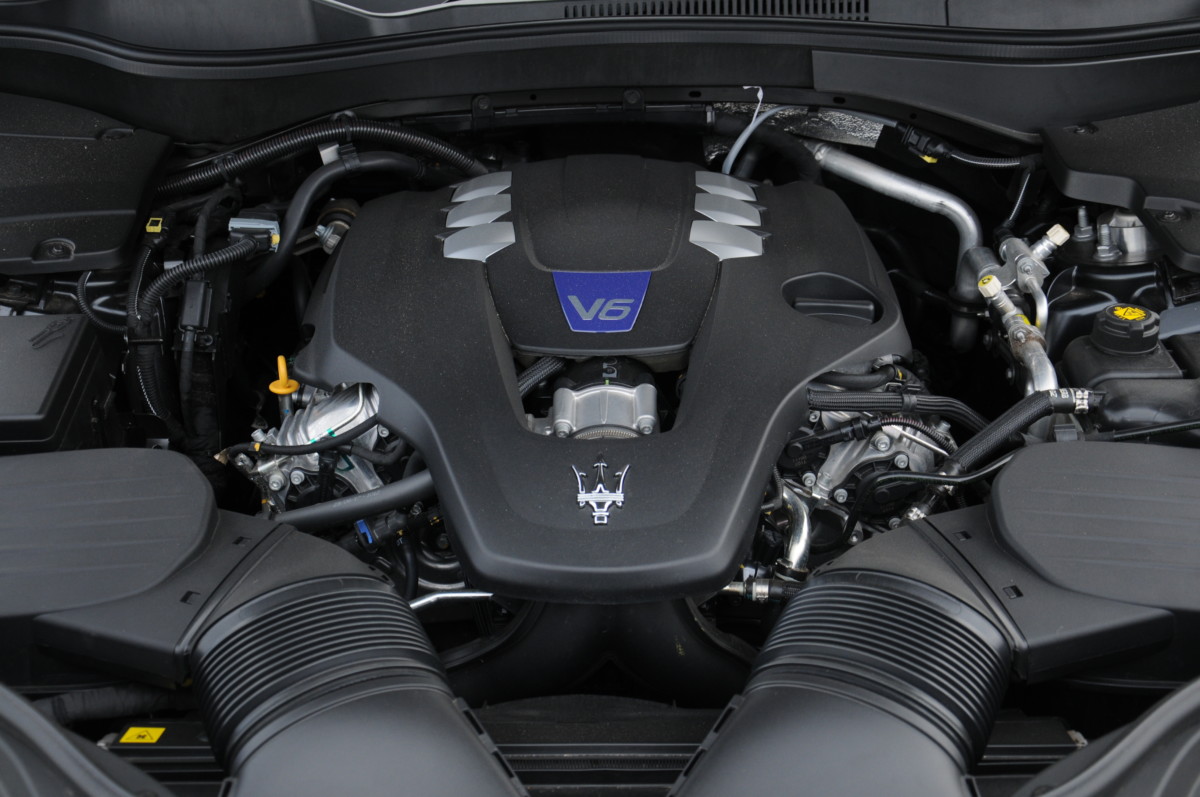 Gearshifts from that ZF are nigh-undetectable under normal driving conditions, and pretty much instantaneous in Sport Manual mode, despite the much-maligned flappy paddles. The selector next to the gear knob has three modes – I.C.E. (Increased Control & Efficiency), Sport and Off-Road. In I.C.E., fuel economy and comfort are prioritised. Switch up to Sport, however, and the Levante S becomes a different beast altogether. Throttle sensitivity and power are given a massive boost, as is the immense noise the V6 makes. Push the Sport button again, and the suspension stiffens up, too. When you put your foot down – and you will – the Levante S takes off with a symphony of petrol-guzzling sounds that you can’t really put a price on. Only… you can. And it’s a big one. Starting at just under R2-million, the Levante S costs a pretty penny, and then some.

Speed demons aside, let’s not forget that a Maserati is meant to be cool and composed on the road. The Levante doesn’t disappoint, complementing rip-roaring speed on demand with comfortable, efficient city driving. The diesel model manages a combined fuel consumption of 7.2l/100km, while the petrol Levante S boasts a far less frugal 10.9 – as if these figures really matter to a Maserati buyer.

Multi-link rear suspension softens the ride in I.C.E. mode, but the Levante’s real trump card is its advanced air suspension, which Maserati calls Skyhook technology. The adaptive system adjusts automatically, depending on which mode you’re in. In all modes besides Off-Road, the springs drop by 20mm once you hit 130km/h, and a further 15mm once you breach the 185km/h mark. The lower ride improves stability and reduces drag, and gives you some sort of peace of mind at high speeds.

Once you’ve come to your senses and parked the Levante somewhere where it can’t give you heart palpitations, it lowers itself a further 10mm to facilitate easier exit and entry.

On the other end of the spectrum, the ride height can be raised by as much as 40mm once you leave the tarmac.  Make no mistake, though – this is no low-ranger, despite the Q4 Intelligent All-Wheel Drive system and limited-slip differential. Variable torque control means that 100% of the torque is directed to the rear wheels, unless the system detects that it’s needed elsewhere.

And with those massive 20-inch wheels, the Levante S isn’t going to tackle anything tougher than gravel, sand or mild snow. ESP will help detect different conditions, and HDC will slow your roll on steeper slopes, but this work of art won’t be chasing trails any time soon.

I did brave a tricky, pothole-laden gravel track near Sir Lowry’s Pass, but I wimped out at the first sign of scratchy overgrowth. That paintjob ain’t cheap, you know.

The Levante S is long, sexy and loud. Ergo, it is a true Maserati. The debate ends there. What it isn’t, is a properly off-road capable SUV. Even if you are brave enough to park it at the base of a Grade 2 trail, you’ll turn around the first time you hear those side skirts scrape.

However, that’s not what it was built to be. The Levante S is a superb driving machine – fast, composed and capable of producing the spine-tingling soundtrack a Maranello motor should. It’s something special; something that few will own, but that many should seek to drive.