Vervet Monkeys (Chlorocebus pygerythrus) are the most widespread of the African monkeys; occurring from the Ethiopian Rift Valley, highlands east of the Rift, and southern Somalia, through the eastern lowlands of Ethiopia, Kenya, Tanzania, Uganda, Zambia (east of the Luangwa Valley), Malawi, Mozambique, Zimbabwe, Botswana and all nine provinces in South Africa. Like the Impala (Aepyceros melampus) of a previous article, vervets are often overlooked because they are so ubiquitous. Yet they are fascinating animals and certainly worthy of a second look.
The origin of the name ‘vervet’ is unclear; perhaps a shortening of two French words ‘vert grivet’ meaning ‘a green grivet’ (Gove 1993). Grivet, origin unknown. Whilst the etymology of their name may be uncertain, their grizzly, silver-grey coat (which sometimes takes on a greenish tint – hence the ‘green’ in their French name), along with their characteristic black face, white eyebrows and long tail, make them easy to recognise in the field.

The hair around their face is tinged white to highlight facial expressions during social encounters. A vervet wishing to intimidate another will simply raise its brow to reveal pale eyelids; the stark contrast with the black face conveying an unmistakable message to the recipient. The other unavoidable feature is, of course, the male’s turquoise-hued scrotum. Nothing like a splash of colour to liven up your ensemble, is there now! So how do these primates actually get such blue family jewels? At a molecular level, the colour originates from the Tyndall effect; the scattering of light by the skin itself, researchers say. The skin of blue-hued monkeys has unusually neat and orderly collagen fibres, according to a 2004 study. They’re so well organised that a change of as little as a millionth of a centimetre in size of, or distances between, would produce a totally different (and perhaps far less eye-catching!) colour. 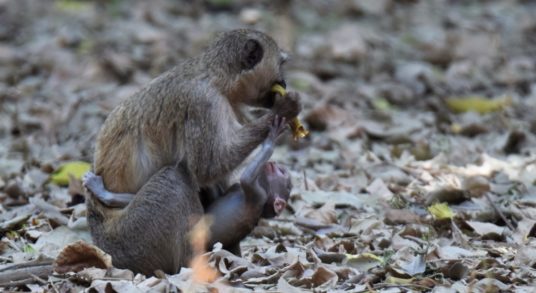 Vervet monkeys are highly social and live in troops of up to 50 animals. Within a troop, adult males form a dominance hierarchy that is established and maintained by threat and aggression. At sexual maturity, young males tend to migrate between groups – usually in the company of a sibling or peer. This is thought to help prevent inbreeding within a troop. In contrast, females remain in their natal groups and form strong hierarchies that are based on maternal social status. When babies are born, they are covered in black hair and have pink faces. They appear very different from the adults; a fact which is believed to help the troop identify the young so other adults and sub-adults can assist with their care. As is the case in most social creatures, communication is key and nowhere more so when you are on the menu of a number of different predators. In such instances, being able to notify your relatives where that threat is coming from is particularly useful. Vervets give acoustically different alarm calls for different predators. Each alarm induces contrasting, seemingly adaptive, responses. Animals on the ground respond to leopard alarms by running into trees, to eagle alarms by looking up, and to snake alarms by looking down.

Whilst it is true that these intelligent primates can become problem animals around human habitation – in their defence usually because they are initially fed by people who think they are cute, and who later react negatively when their behaviour becomes aggressive when they don’t get what they want – vervets play an important role in natural ecosystems. One of these environmental functions is acting as an agent for seed dispersal. The seeds are ingested as food and pass through the monkey’s digestive system intact, ultimately being excreted some distance away from where they were originally consumed. According to the South African National Biodiversity Institute (SANBI) vervets can play an important role as seed dispersal agents to rehabilitate environmentally disturbed areas as a result of this behaviour. A good example of this is in dune mining rehabilitation projects in Richards’s Bay in KwaZulu-Natal where researchers from the Mammal Research Institute at the University of Pretoria found that vervets played a major role in the restoration of these areas, by ensuring that the indigenous vegetation was re-established in previously totally denuded areas.

So, go on, admit it… You are going to take a second look next time you see a vervet monkey if only to check out the more colourful parts of this article!