“And though they be but little, they are fierce…” (William Shakespeare)

Although this is a cheeky misquote from Shakespeare’s a Midsummer Night’s Dream, it is so apt when applied to the subject of this month’s article – the Dwarf mongoose (Helogale parvula). What this southern African small carnivore might lack in stature, it surely makes up for in attitude!

A Dwarf mongoose weighs between 210-350g on average, with a maximum shoulder height of about 7.5cm and a total length (including their tail) of 35-40cm. The Dwarf mongoose is the smallest of the family Herpestidae (derived from the Greek herpestes, a creeper – likely referring to their way of scurrying through the bush) and is highly social, living in cohesive groups of three to 30 individuals. Within each business – the collective noun for a group of mongooses – there is a rigid hierarchy in which a single breeding pair suppresses reproduction in other group members. The business collectively engages in territorial defence, sentry duties to look out for predators, babysitting, and grooming. When it comes to food, they follow a catholic diet; feeding on anything from insects to snakes, lizards, and small mammals.

Mongooses have a special tool in their arsenal for dealing with snakes; partial protection from Elapid (cobra and mamba) venom. Without getting too technical, they have a mutation in one of their nerve receptors that prevents α-neurotoxin in the venom from binding to the receptor site. This mutation does not confer immunity to the venom, but does afford a certain level of protection from its effects.

It is quite common to see Dwarf mongooses in the presence of insect-eating birds like Southern Yellow-billed hornbills (Tockus leucomelas), Fork-tailed drongos (Dicrurus adsimilis), and Lilac-breasted rollers (Coracias caudatus). The birds catch insects that have been disturbed by the foraging mongooses and the birds act as an additional sentry system for the mongooses. In particular, hornbills have been observed in the presence of Dwarf mongooses sounding alarms for predators that pose no danger to the bird, only to the mongooses. Each morning the hornbill will show up at the den – often an abandoned termite mound – where the Dwarf mongooses have spent the night. If the group are not yet awake, the bird will call to wake them up and wait whilst they all emerge before they head off to forage together. Interestingly, if the hornbill fails to arrive, the mongooses have been noted to become agitated and restless; delaying their departure as long as they can and even sending individuals back to the den to check for the missing bird. Rough-scaled Plated lizards (Gerrhosaurus major) also co-exist with Dwarf mongooses in termite mounds, were the lizards feed on the mongooses’ faecal material. A hornbill alarm clock and early warning system, and a lizard cleaning service – these little guys have their security and domestic detail sorted!

Mongooses also possess anal glands which they use for scent marking. Scent marking is an important means of communication for many animals, and can transmit information about their sex, age, and reproductive status. So, how do Dwarf mongooses communicate using pastings? By doing ‘handstands’ of course! Some smaller males even use a cartwheeling flip to reach just that little bit higher. But why go to so much trouble for those extra few centimetres? Because height is apparently very important to a Dwarf mongoose. Lynda Sharpe, a behavioural ecologist at Stellenbosch University, found that females pay much more attention to higher scent marks than those lower down, which suggests they use the marks to gauge body size. Interestingly one of the findings of her research was that females were more interested in obtaining information about other females than males. This is probably because female Dwarf mongooses experience extreme competition with others of the same sex. Sharpe thinks that, since females spend their entire lives in the same territory, they use scent marks to assess the risk of nearby groups encroaching on their space. The heights of handstand scent marks help them to size up potential female rivals and gather information on those that pose the greatest threat.

So, whether handstanding, cartwheeling, or simply going about their daily business, these pint-sized predators are an important part of healthy ecosystem functioning, and, dare I say it, cute into the bargain!

“These little guys have their security and domestic detail sorted: a hornbill alarm clock and a lizard cleaning service” 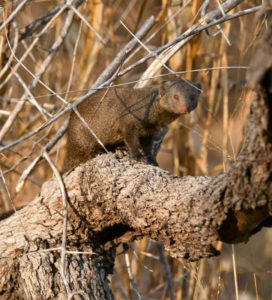 The Dwarf Mongoose. A pint-sized guy with plenty of attitude, and an interesting array of co-operative early warning systems. 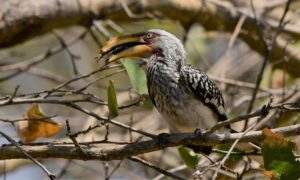 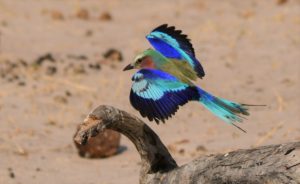 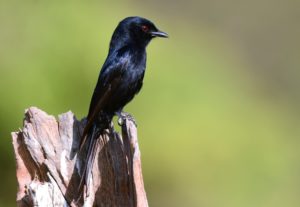 Insect-eating birds such as the Fork-tailed drongo and Lilac-breasted roller benefit from the Dwarf Mongoose’s foraging exploits, though the Southern yellow-billed Hornbill seems to return the favour by co-operating as a lookout.