Journalist Carolyn Dempster joins an Ultimate Adventures tour through Zambia to witness the extraordinary annual bat migration at Kasanka National Park, and finds that the bonhomie of a diverse tour group has some key advantages

Let’s be clear. This is not a bland travel tale. The kind where you skim over a script stuffed with adjectives, flick through photos, linger as long as your attention-deficit-disorder will allow, and move swiftly on to the next picture fantasy. No, this is next-level stuff. Stay with me… This story starts before the break of dawn, with the swelling sound of millions of jubilant high-pitched squeaky voices celebrating a night of feasting.

Walking in the dark along a hippo path at the edge of the wet Mushitu forests of Kasanka National Park in central Zambia, the cacophony of sound produced by nine million bats in conversation precedes one of the most aweinspiring natural spectacles in the world – the flight of the fruit bats at dawn.

As the sun rises, the bats spiral in a massive cloud of wings and beating hearts over the indigenous forest of Kasanka. It is a sight that blots out the sky and will sear itself into your soul forever. It happens in November each year, and it is part of the largest mammal migration on the planet.

Witnessing the beginning of the annual flight of millions of African straw-coloured fruit bats (Eidolon helvum) from the Congo basin to Kasanka had been on my bucket list for a very long time. I have travelled and worked in Africa as a journalist for more than 30 years, but there are always those who are older and wiser, and better-travelled. So, when my friend Helen van Houten said that the bat migration was something that I “should not miss” in this lifetime, I took note. It took me 25 years to get to Kasanka, and it was worth the wait.

Elephant in the dust

Ultimate Adventures was my ticket to ride. Husband-and-wife team Simon & Des Steadman offer a 14-day migrations self-drive guided expedition to Liuwa Plains and Kasanka National Park via Botswana. What clinched it for me was the inclusive offer of a cooked dinner every night. No sweating over a hot fire trying to thaw a frozen steak you forgot to take out of the freezer at lunch-time after a long and dusty day on a terrible road. I signed up.

Our launch point was Elephant Sands lodge and campsite, north of Nata off the A33 in Botswana. It’s an improbable place for either a lodge or a campsite. There is no natural water source here, and for miles around there are few large trees, and even less shade − just hard sun-baked earth, and hundreds upon hundreds of elephants.

What happens at Elephant Sands is a minor miracle of sorts. As the dry season peaks, and the rain-filled water holes dry up, Elephant Sands owner Ben Moller trucks in 40 000 litres of water daily to fill the underground water tank in front of the lodge. It is a life-saver for the hordes of thirsty elephants roaming the region, and they know it only too well.

A perimeter of stones and dead branches marks the outer edge of the campsite. This is all that separates you from the elephants that trundle in to the water trough from all directions. You could be busy erecting your tent, on your way to the shower, or simply looking the other way… the elephants couldn’t care less. If you are in their path, en route to the water point, you had better step aside, and briskly. But, in a lifetime of watching African elephants in all habitats, these have to be the most accommodating wild elephants I have ever encountered; and, quite possibly, the least aggressive towards humans.

As they gather for a mud bath, or a chance to quench their thirst, the elephants are patient, not pushy. Matriarchs make space for and protect the youngsters, fractious adolescent bulls are quickly brought to heel by older males, and the slow steady rotation at the narrow water trough continues unabated, long into the night, until the water runs out.

A rite of passage

The following day, our newly-united band of 11 vehicles and 20 fellow travellers set forth to make the two border crossings into Zambia via Namibia. We should all have taken a lesson from the elephants’ playbook: we were going to need patience and tolerance in large doses.

Africa’s land-borders, for the most part, are slow, messy, disorganised affairs. They are inevitably marked by long queues of trucks in various states of disrepair, hordes of money-changers brandishing currencies and calculators, and a maze of unmarked offices, with weary civil servants filling out a multitude of forms by hand. Sometimes the computers are working; mostly they are not. Touts offer to help guide the hapless tourist through the bureaucratic maze for the right price − but beware. If you don’t fill out the right forms, and ensure that your child, or trailer, has been properly documented, accounted for and paid for, you may not be able to get either out of the country at a later stage.

It took our sizeable group four hours and at least a bucket of sweat to survive the ordeal of gaining entry to Zambia. No mean feat. But it proved to be a bonding process, the frustration alleviated by much laughter, and by holding the line against would-be queue-jumpers.

To be fair, the Zambian immigration officials at Sesheke were all diligent and polite. It makes a massive difference, especially in sweltering temperatures of 39 degrees Centigrade and rising. There are numerous other border experiences I have had, and countries I could name, in which the officials are not only unfriendly but overtly obnoxious, and then demand an illicit fee for their uncivil service. But, from the start, our friendly interactions with Zambians of all ages endeared me to the country and its people. 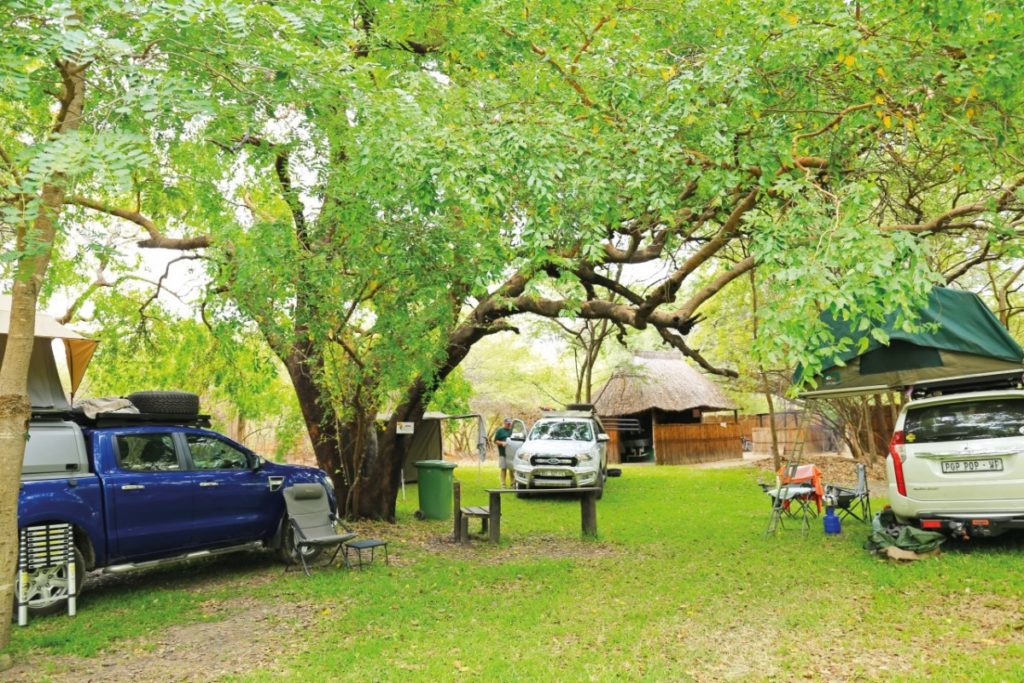 Kabula Lodge on the Zambezi River – a haven under the trees.

By the time we arrived at our first stop on the Zambian leg of the expedition – Kabula Lodge on the Zambezi River − it was dark. Waking to a bright-green, cool, forest canopy, with the sounds of birdcalls and water lapping the river shore, was a soothing relief. Time to take stock of the group.

As one of only two single travellers on the expedition, the sheer size of the group worried me. Big groups don’t travel fast, and usually don’t gel that well. Here we were – a diverse crowd ranging in age from our early 40s to late 60s, with one 5-year-old (the chatty Anja – she-who-wouldnot- wear-shoes), all mostly South Africans (which could prove to be a blessing or a curse), and a mix of conservatives and liberals, professionals and retirees, drinkers and non-drinkers, with 5000km or more to go. 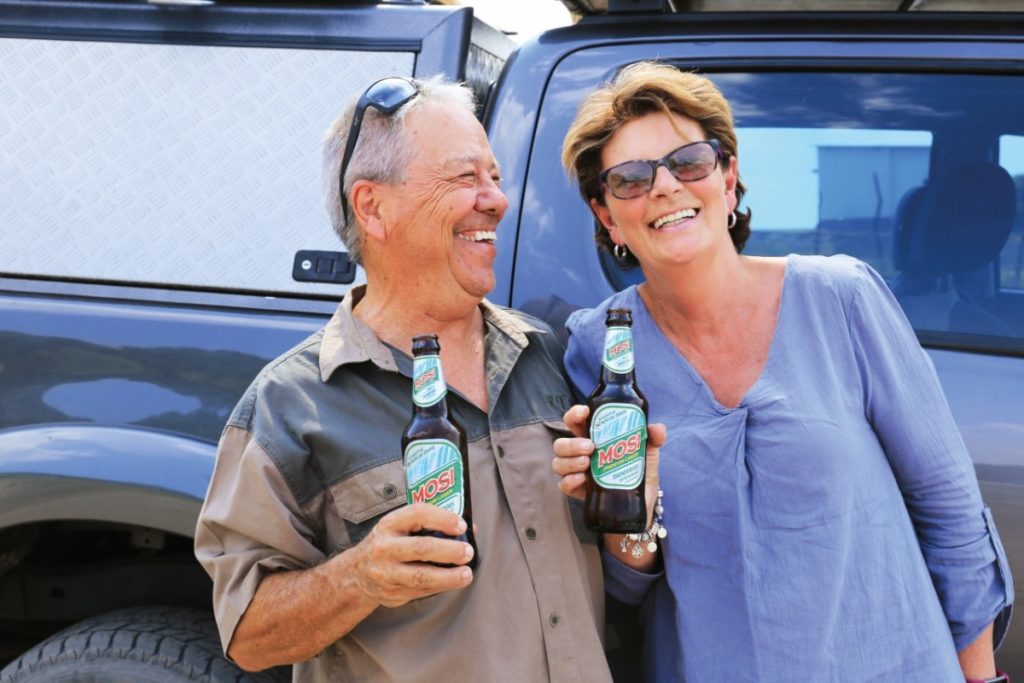 Potentially even more perturbing was that most of us were newcomers to the concept of travelling in a self-guided group; and it wasn’t long before grievances started bubbling to the surface. Convoy protocol was the first stumbling block.

For the rest of Carolyn’s adventure, be sure to get your hands on the March issue of SA4x4 Magazine.