Home » Travel: Beyond the desert edge

Adventurer Peter Van Kets and photo-journalist Jacques Marais decided to ride their mountain bikes from Angola to Swakopmund. But before they could crank off on this incredible adventure, they first had to get to the Cunene River …

This is one of those journeys that started quite some time ago. I’ve always been keen to get on board one of Peter Van Kets’ amazing adventures, but when we started chatting about a possible adventure collaboration earlier this year, I never expected that we’d launch the first in a series of ‘Beyond Expeditions’ less than six months later.

Somehow it all came together over a good few beers, with Dunlop Tyres SA signing on as main sponsor for our first expedition, ‘Beyond The Desert Edge’. Additional support from Isuzu South Africa, Wilderness Safaris, SPAR (Eastern Cape), Giant Bicycles (SA) and Hi-Tec (SA) meant that we had a green light to tackle a one-of-a-kind desert MTB crank, all the way from the Cunene River bordering Angola, to Swakopmund in Namibia.

And the best thing about it all is that we will be raising funds for Children in the Wilderness, our official charity, with all funds going towards educating kids in wild places, and instilling a love for nature in them (www.childreninthewilderness.com).

A few weeks of frenzied organising, branding, packing and gazing at the crystal ball of Google Earth, and we were good to go. (There had been a small crisis because rims we were to test for the Grandtrek tyres flown in especially from Japan were the wrong size –– but these Dunlop beauties were now fitted and ready to roll.

Apart from Chief Adventurer PVK and I, we had Pistol Peter Kirk and his brother Graham on board to handle the videography, drone work and camp logistics. So, by late Thursday afternoon on August 31st, we gunned our two Isuzu KB workhorses onto the N7 to hammer the first section of what would be a long road to Serra Cafema.

Getting to this incredible Wilderness Safaris camp on the banks of the Cunene River would prove to be one helluva adventure in itself. There’s just no quick way by road to Windhoek from Cape Town, which meant that a through-the-night drive along the N7 loomed. 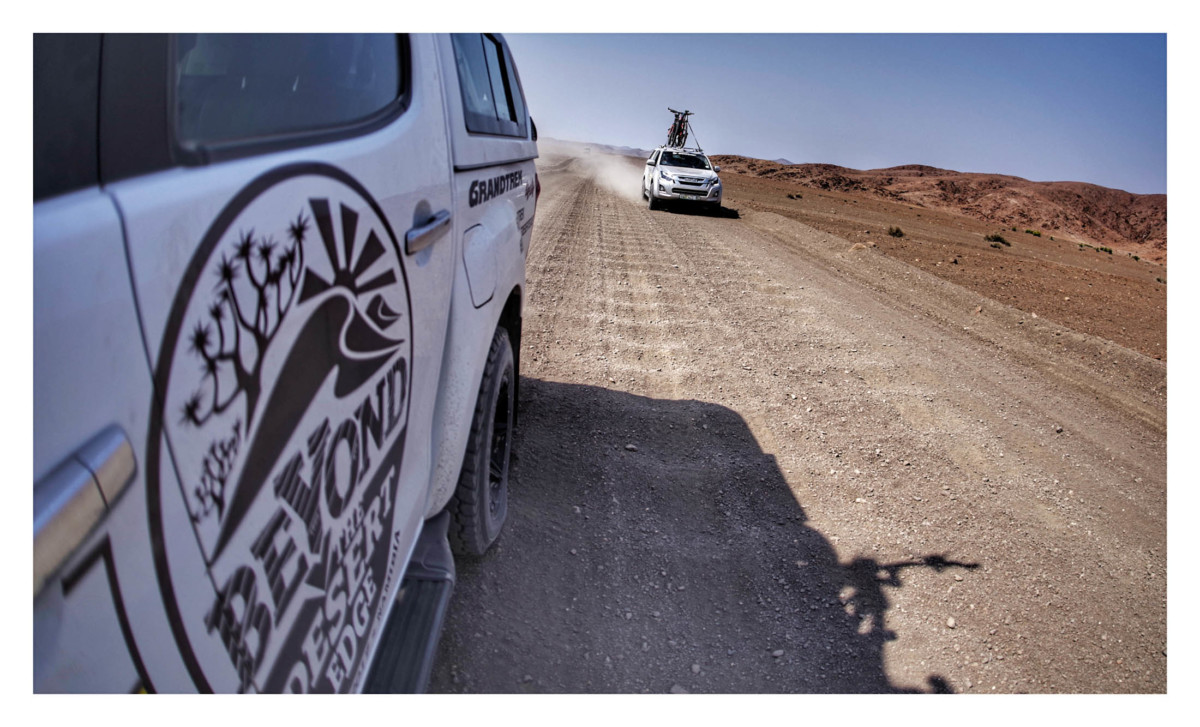 Finally on the road.

PVK had named the one KB Bakkie ‘Trevor’ (because he’s ‘manual’), and I came up with ‘REM’ for the other (as in ‘automatic for the people’). A quick take-away stop at Klawer and a midnight fuel fill-up in Springbok got us to the border at Noordoewer, where a minor hiccup occurred around the quantity of red wine we’d packed for the trip. 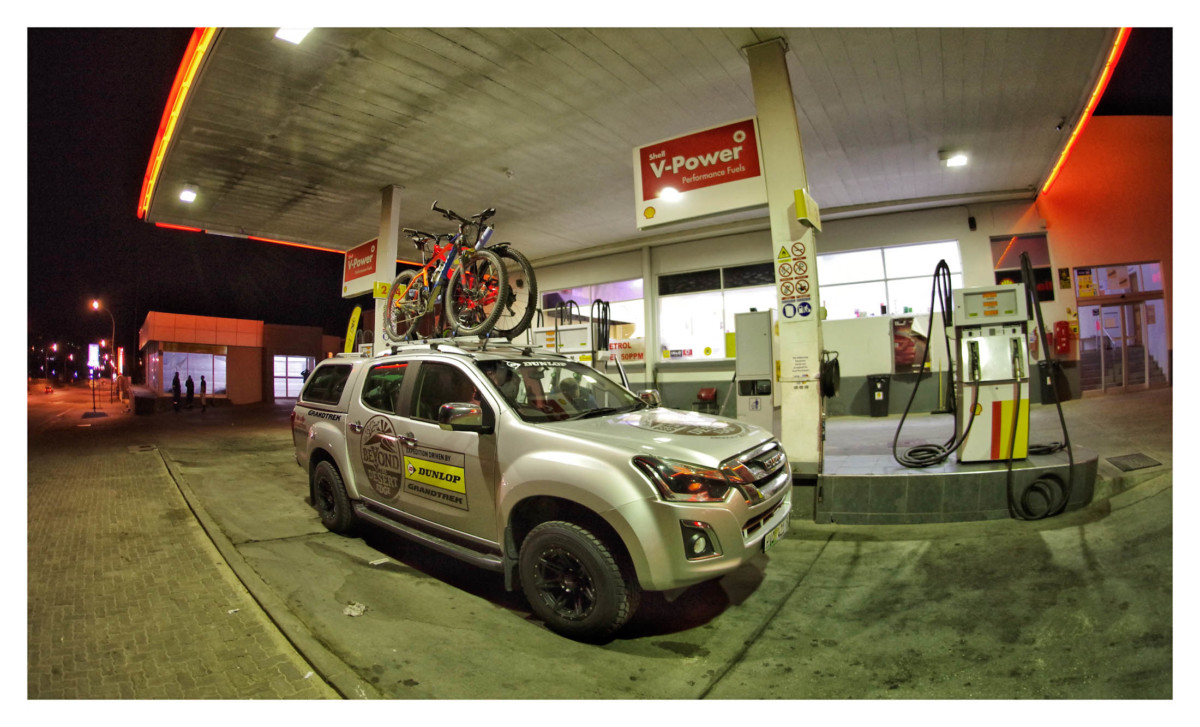 Filling up in Springbok.

The issue was that we had three cases of the good stuff, rather than the allotted two bottles each, but it was well after the witching hour, and I had a feeling the officials were not in the mood for the ensuing red tape. Good thing they did not notice the cases of Darling Brew Desert Dragon.

We fought off persistent sleep monsters on those never-ending straights between Grunau and Rehoboth, eventually pulling into Windhoek just shy of 8am – pretty much red-eyed, and moer-toe.

A quick pit stop at Woermann & Brock fired up our resolve for the road northwards. (Their coffee shops serve a weird German brötchen with raw meat and gherkins, and some passable coffee). We still had to face Maerua Mall, for a final shop for provisions at a local Spar supermarket to stock up on meat, fresh goods and biltong. 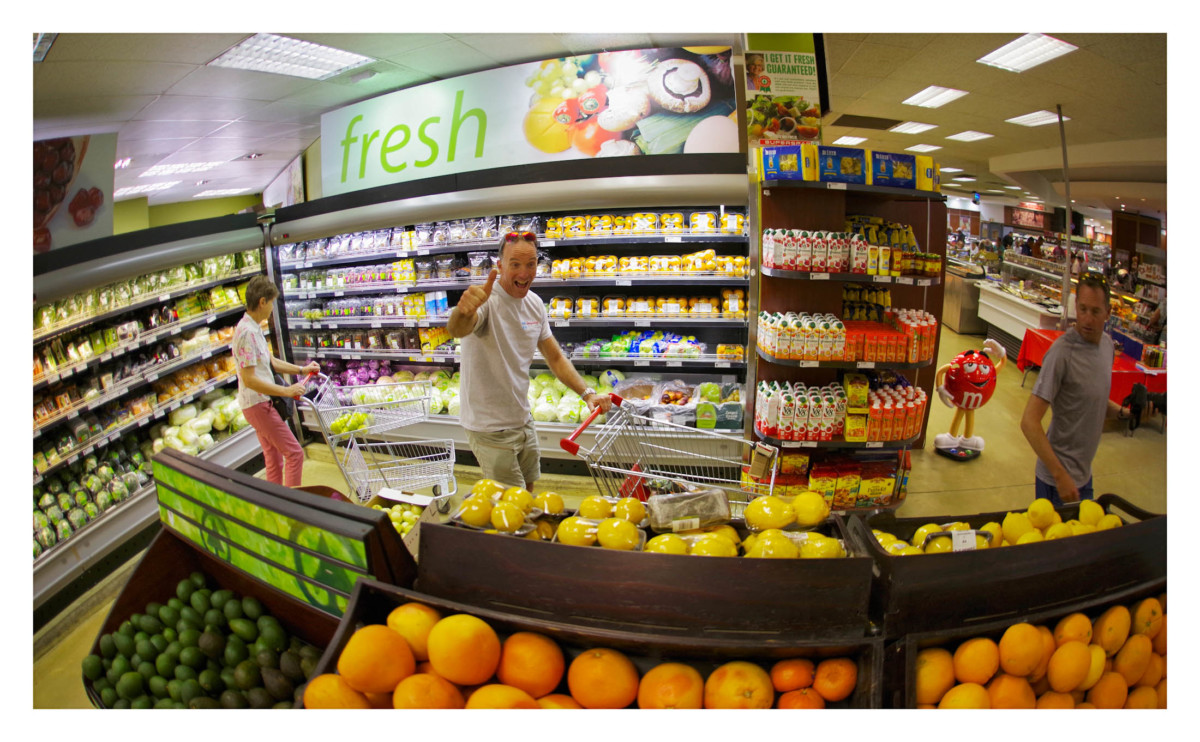 Shopping for provisions at the Spar in Merua Mall.

By now, we had hooked up with Gert, our guide from Wilderness Safaris, and we followed his Land Cruiser as we chugged along past Okahandja and Otjiwarongo, with the Grand Treks whistling a merry tune on the shimmering tarmac.

Fortunately, neither the Isuzus nor the tyres had long to wait for their first taste of Namibian gravel, as the dirt road proper started just beyond Kamanjab. We were now around 24hrs into the drive: road conditions were fast deteriorating, and the drivers were seriously running out of steam. Palmwag was still a good few hours away and the sun was setting fast, so we decided to pull into Hoada Campsite, right on the edge of the Palmwag Concession.

What a good move this was. Here we found dramatic rock outcrops, and rustling stands of mopane − all eerily quiet, except for the distant serenade of a lone black-backed jackal. I crawled out of my tent in the early morning hours for a traditional tree-wetting ceremony, and found the landscape brightly lit by a waxing moon for as far as I could see. For the first time it really dawned on me that this was finally it: ‘Beyond The Desert Edge’ was a reality. Our adventure had now officially started.

Day Two of our road trip coincided with PVK’s birthday, a fact which he’d been keen to keep under the radar. (He looks pretty all right for 64, I have to say). This was the perfect occasion to christen our BTDE tin mugs, and we all huddled around a smoky Namibian hardwood fire as the sun blazed up in the east. From here, the road morphed into more of a track as we bombed beyond Palmwag and Sesfontein (our final fuel stop), before meandering onwards towards a smattering of tiny mud-and-corrugated-iron shanties in a Himba ‘village’ by the name of Purros. 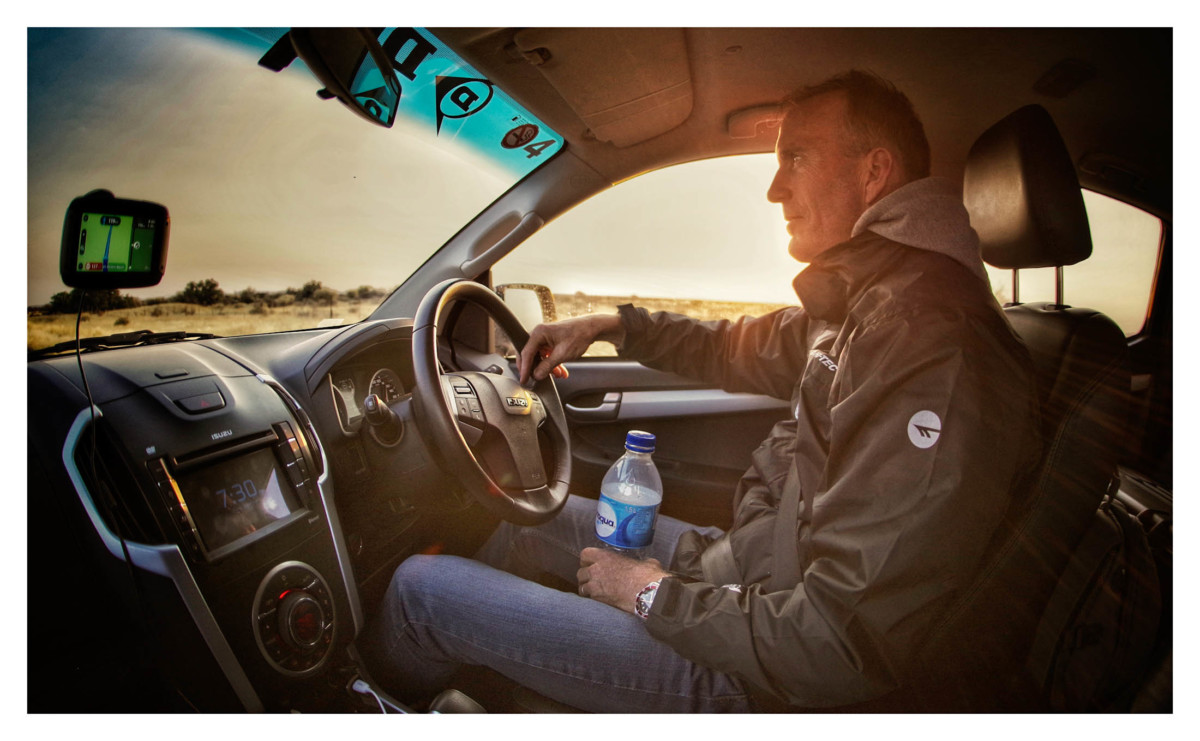 All around us, the landscape had started rucking up in a series of dramatic ridges and outcrops. It was pretty much as if some ancient god had become bored with the whole creationist process, and just dumped a final consignment of stones and rocks and geological rubble in haphazard fashion.

During this process, a dramatic and magnificent desert mountain took shape; the kind of place that would show its horns if you did not pay due attention. It is undeniably majestic, though, with the added cachet of being a personal ‘terra incognito’ for Pete and me. We had never been further north in Namibia than this…

For the full adventure, make sure you get your hands on the June issue of SA4x4 Magazine. In stores now!