The Bokkeveld is a must-see on anyone’s travel itinerary if long stretches of open country get your imagination going. I had an additional incentive: the chance to test a brand-new circular gravel-road route that neighbouring farms in the Nieuwoudtville region have put together.

But one thing’s for sure, the corrugated R355 that links Ceres and Calvinia is a stern test for any 4×4 suspension and, right now, the back end of my test car, a Toyota Fortuner 2.8 GD-6, was bucking about on the corners. I was beginning to wonder why I had pleaded for an SUV instead of a bakkie.

Yes, I was a single passenger in a seven-person people carrier with a scant 80kg in luggage, and I was pushing on a bit, but I did get to thinking that the stock spring and damper settings were over-firm.

I was on my way to a brainstorming breakaway at the well-known Papkuilsfontein Guest Farm outside Nieuwoudtville. I had been asked to come along by Cobus Theron, who manages the Drylands Conservation Programme (DCP) for the Endangered Wildlife Trust. My role was to see if any sustainable nature-based tourism activities could be added to the list with which they hope to help better conserve the unique bio-diversity of the Bokkeveld escarpment.

Cobus had also said there may be some rugged 4×4 driving opportunities on and around the escarpment, but I’d devised my own there-and-back dirt road test track of some 1 000km for the Fortuner just in case these didn’t materialise. And, as things turned out, I was glad I did.

Travelling from the south, there are three main back ways to Nieuwoudtville off the R355. I’d already cancelled out the Skittery, Katbakkies, Blinkberg, Uitkyk, Pakhuis and Botterkloof passes option by using part of it to access the R355 from Ceres, which left the Uitspankraal-Biedouw Valley alternative and the more straight-line choice from De Bos.

I chose the last option mainly because I’d dawdled that morning; but also because recent rains would more than likely have made the crossing over the Doring River more challenging than I could safely face on my own. The last thing I wanted was to have to explain to Toyota why the Fortuner was last seen going south down the Doring…

About halfway to the Soutpan turn-off you come across a farm gate, which marks an excellent spot to take out your camping chair and have a cup of coffee, while admiring the sweeping vistas of the dry plains meeting the Elandsberge in the distance. It’s an enchanting view, but I was chasing the light so unfortunately couldn’t spend much time there.

We were up early the next morning for a taste of the hiking potential in the area, with Cobus Theron right in his element. It wasn’t long before we had transited several rock tunnels, requiring the agility of a dassie, or so it seemed to me. 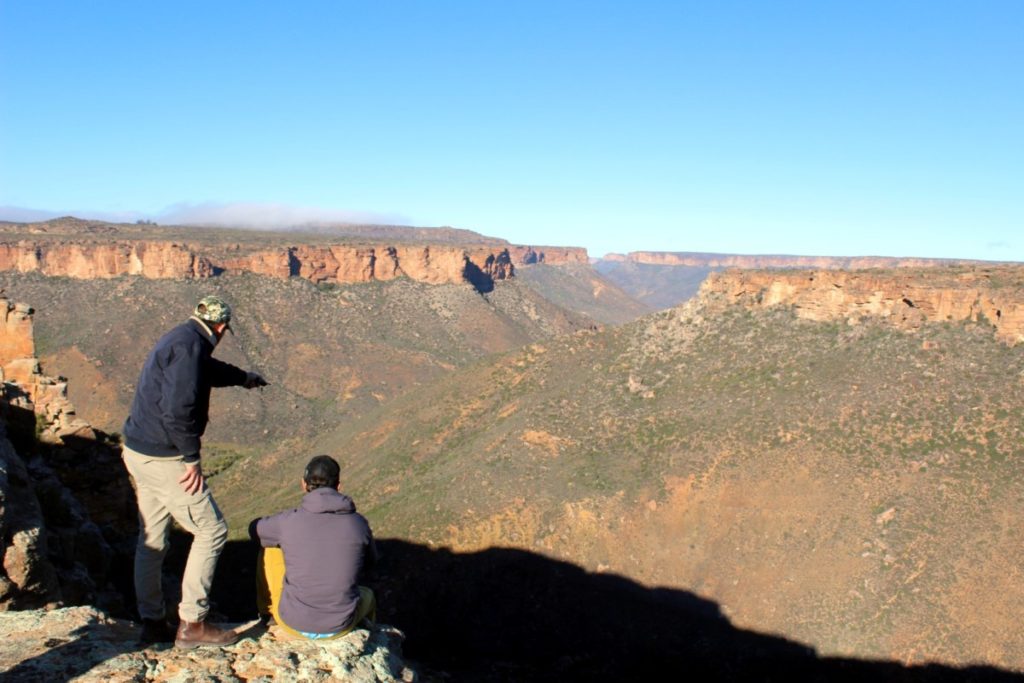 “Sjoe, Cobus, I thought I’d be 4×4-ing with the lekker vehicle I borrowed, not on my hands and knees!” I panted after emerging from yet another tunnel. It seemed the 4×4 sorties I had been looking forward to would have to wait. 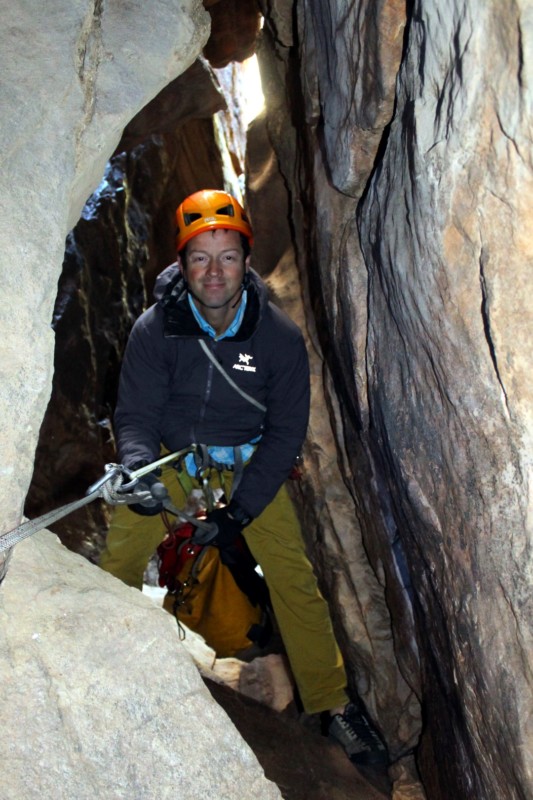 Back on the cliff-tops later, we watched a Black eagle harrying a smaller Booted eagle as we worked our way through our delicious packed lunches. Deciding I had done enough rock scrambling for one day and needing some time alone, I opted to walk the 6km farm track back to reception at Papkuilsfontein, rather than hike with the others to a rock pool in the kloof below.

Less known perhaps, is how rich this area is in San rock art. Hoping to make some new finds away from the impressively daubed ‘rock bar counter site’ where I’ve enjoyed sundowners from before, I got off the track and picked my way towards some overhangs that looked promising. But apart from some misleading watermark stains, I came up empty. 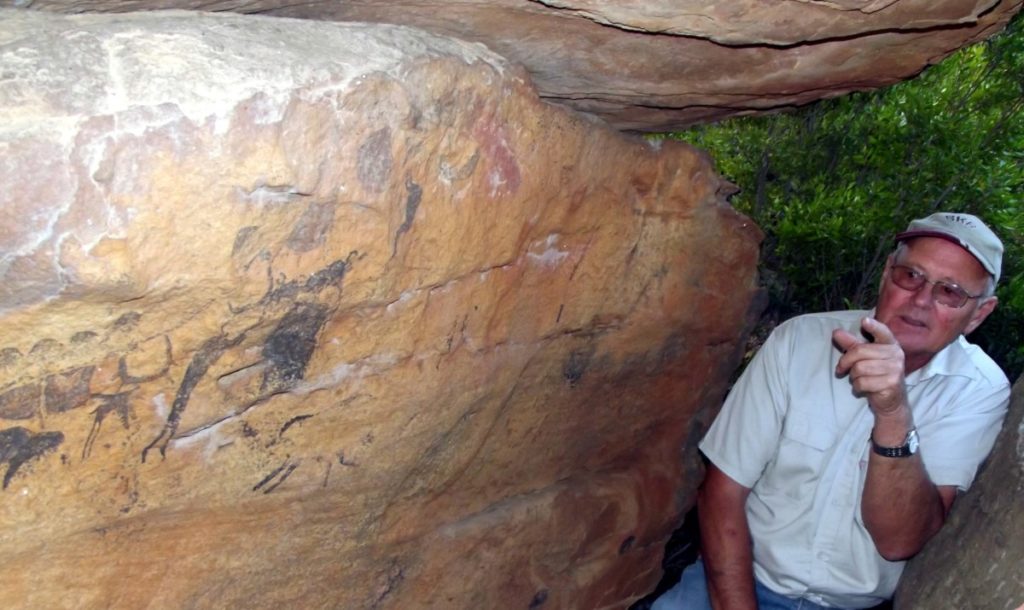 Also not very well known is how Oorlogskloof got its name. In the early 1700s runaway slaves and indentured Khoi servants, fed up with bad treatment at the hands of the colonists, escaped their masters and made for secluded kloofs like this one. But, not being hunters like their San neighbours they often needed to rustle Trekboer cattle for sustenance. It was a retaliatory commando under Captain Theunis Botha on 25 September 1739, searching for among other renegade Khoisan, ‘Hottentot Vuilbaard’ – him and his clan had ambushed two wheat-laden wagons and killed their drivers – who eventually also found the armed kraal of Captain Jantjie Klipheuwel hidden in the kloof. Leading a surprise attack at dawn, the commando killed 13 Khoisan and wounded a number of others, suffering only one fatality of their own. It was after this small ‘war’ that the kloof was named.

At dinner later I finally got the opportunity to plan some of the more testing drives I’d wanted for the Fortuner. Mandie and Ernst Kotze, owners of Grasberg Guest Farm just north-west of Nieuwoudtville, had recently laid out a route starting and ending at their farm. They’ve called it the Bokkeveldberge Circular Route, and it’s something they want to introduce to 4x4ers, mountain bikers and adventure motorcyclists. I just happened to be in the right place at the right time…

With Ernst as my guide and three passengers in the back, we took off in the Fortuner the next afternoon. The trip turned out to be around 125km of one of the most rewarding combinations of mountains and plains driving I’d embarked on for some time. (See sidebar and map for more route details.)

Even though it boasts some steep slopes (1:14) of loose stone and gravel, and occasional patches of thick sand, it cannot be termed a true 4×4 track. This is because it can easily be driven in a high clearance 4×2, or ‘softroader’, with the challenge bigger if there has been recent rain. 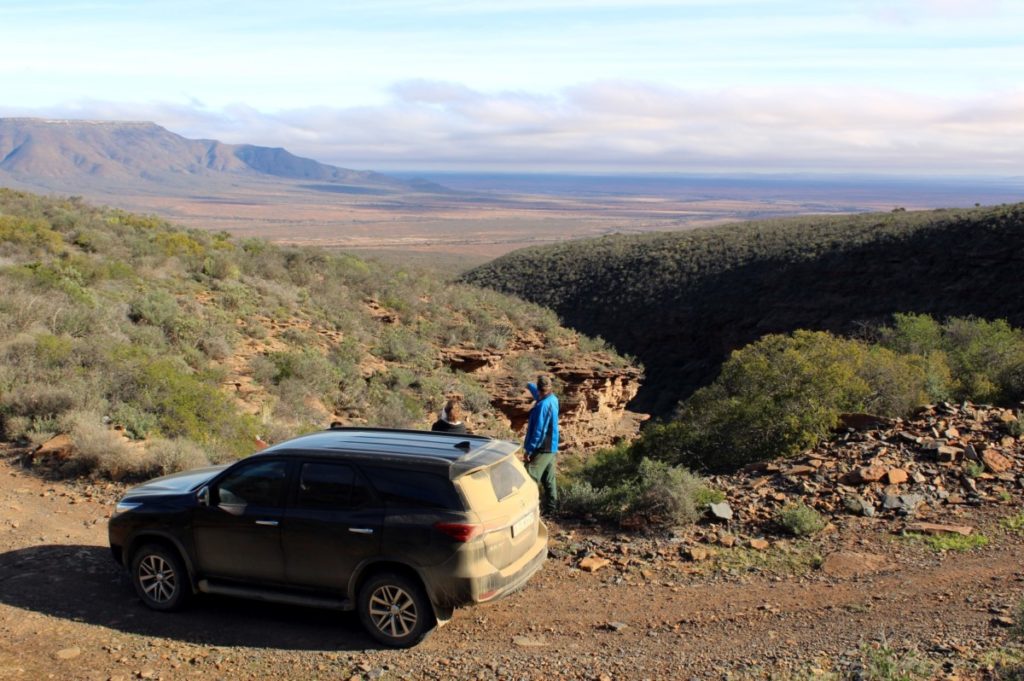 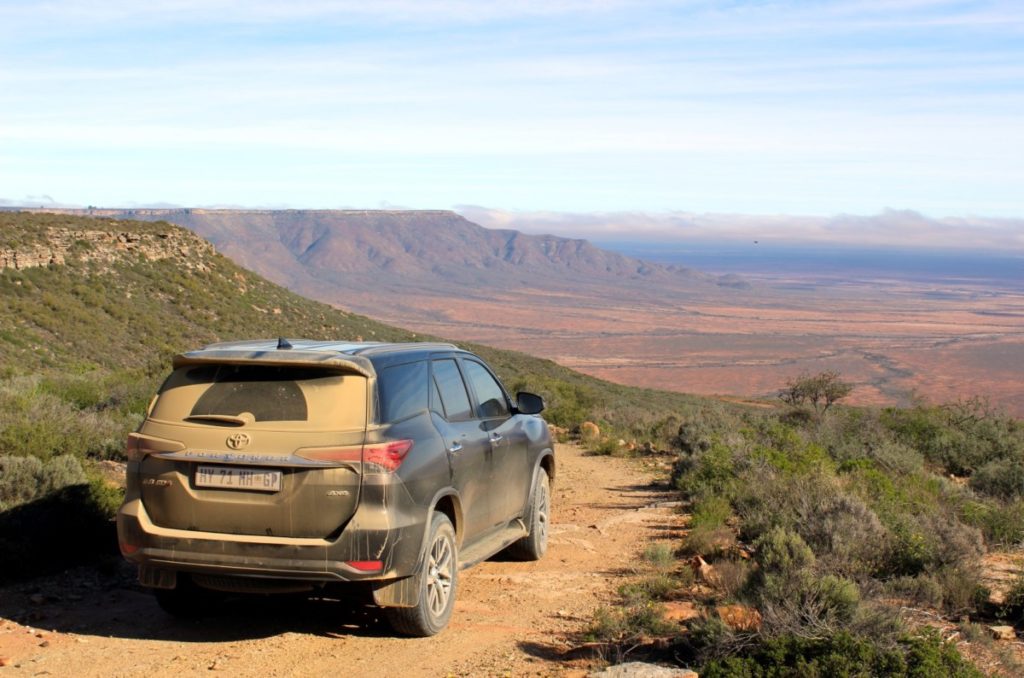 But this shouldn’t deter 4×4 owners. Not only did I find it a spectacularly scenic route, with a fully-laden vehicle heading down the steep and sometimes slippery gradients of the Hel-se-Pad, I was pleased to have the added traction of four wheels instead of two. It’s also a quiet and reasonably comfortable route, one where you can pull out the camping chairs at any time, have a cup of coffee and soak up the vast expanses of the quartz-studded Knersvlakte and the impressive escarpment looming overhead. A feature the wife and family will enjoy. 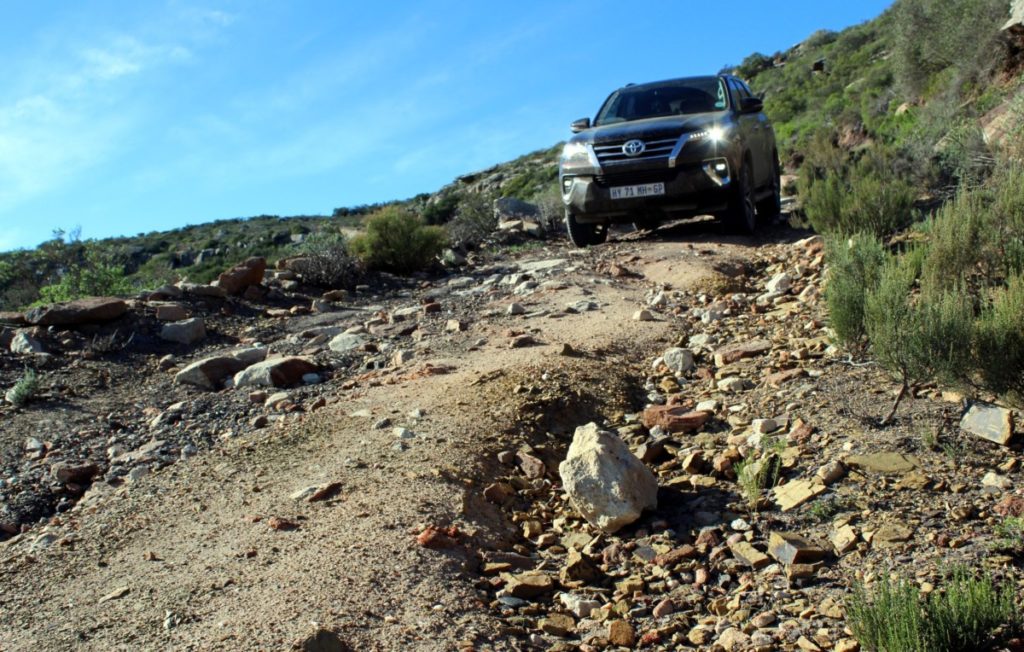 Ernst is a true Namaqualander. And like many of his ilk, such as the late Jan Spies and Tolla van der Merwe, he can spin a yarn like few other South Africans. What makes their stories that much more pleasurable is that they are richly punctuated with the long flat vowels and expressive idioms of the West Coast Afrikaans dialect, and Ernst was a master of this craft.

The answer to each question I asked him was couched in long, mellifluous replies. Clearly, conversation is still considered an art form in the Bokkeveld, one that should be preserved at all costs. For instance, when I remarked to Ernst about the amazing number of different gate-fastening mechanisms one comes across in the Platteland, he told me a story which went something like this (apologies for any inaccuracies, lost in translation or otherwise):

“Yes, I had an uncle who had problems with a gate-fastener once. You see, he had just traded in his old Chev for a brand-new Valiant Regal. Out-of-the-box. He was very proud of it and couldn’t wait to show the family. When he stopped at one of the farm gates, in his hurry to get home, he forgot to put the automatic car in park. But even though the car was on a slight decline, a small rock had luckily wedged itself under the left front wheel. This particular gate-fastening mechanism was one he’d inherited from his father and it always gave him problems. Anyway. He eventually got the fastener undone; but by the time he swung the gate open the Valiant Regal had simultaneously dislodged the stone holding its front wheel and the car rolled past my uncle, and started to gather speed down the hill. Now my uncle was a tall man and with his long legs he managed to catch up with the car; but he had to get into the passenger door behind the driver seat. By this time that straight six motor is liking the increasing downhill slope and it changes up a gear. My uncle has to then jump over the front seat and dive onto the brake pedal from above, eventually stopping the car a short while later. But he can’t push the brake pedal and get the car out of gear at the same time as he was stuck there at an awkward upside-down angle. So when the foreman found him there later, he still had his legs in the air and was pushing the brake pedal with his hand, muttering to himself about the safety of new-fangled cars and so on.”

The next day I continued my dirt track journey back towards Bot River. I opted for the aptly named Moedverloor Pad, which I assumed was just as wet and slippery (much of its surface is red ‘potklei’) when the early Trekboers passed this way hundreds of years back. 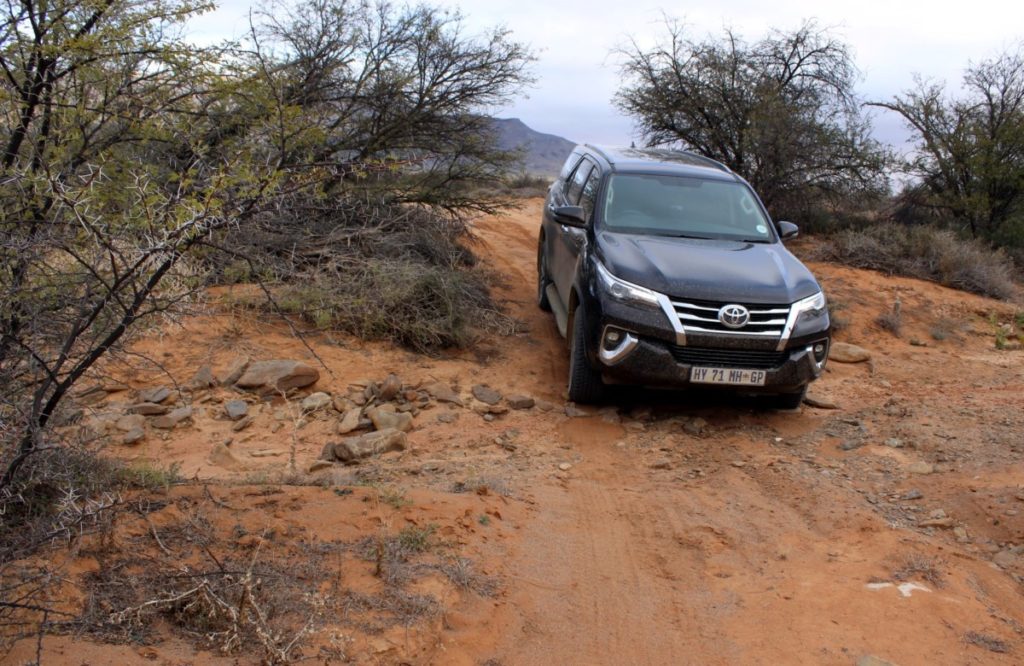 But don’t let this or the many farm gates (most are motor gates) put you off. It’s an epically beautiful, 61km route that will take you about one-and-a half to two hours. And when you get to the R364 main gravel road between Clanwillian and Calvinia, you’ll only have about 25km to go for a great cup of coffee and good meal at Traveller’s Rest Restaurant.

As is fitting in a vehicle such as the Toyota Fortuner 2.8 GD-6 4×4, I took a circuitous back roads trip of 990km, a third of which was on dirt tracks, starting and ending in Bot River. 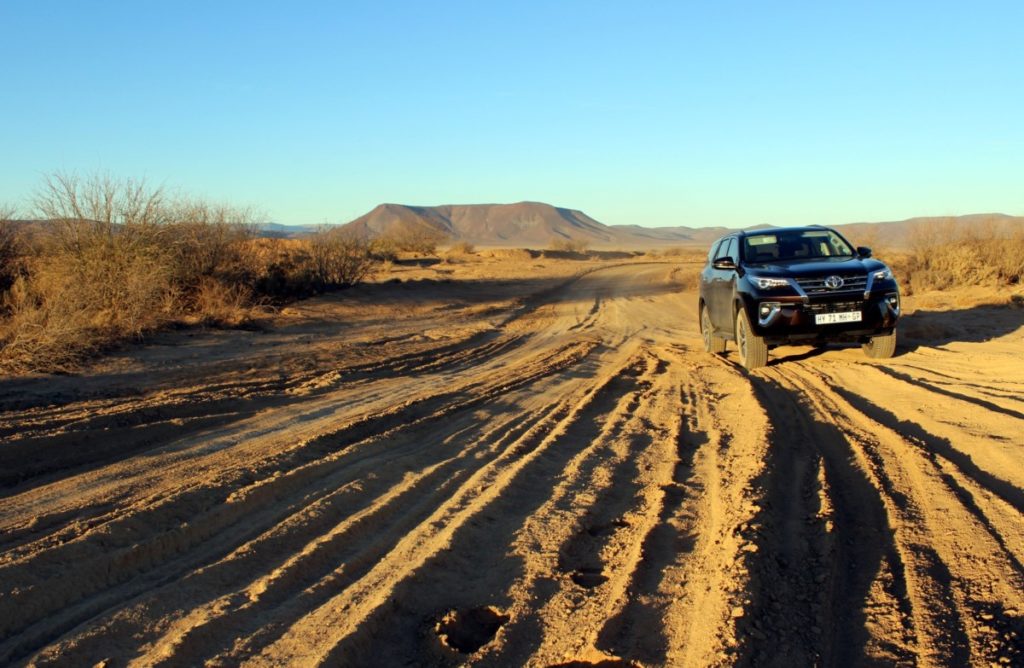 The return journey followed the Moedverloor Pad from Papkuilsfontein Guest Farm to the R364 between Calvinia and Clanwilliam, passing Traveller’s Rest and through Pakhuis Pass. From Clanwilliam it was tar all the way home via Porterville, Wolseley and Worcester.

Total distance excluded the 125km of the Bokkeveldberge Circular Route, The driving is rated easy to moderate, though the route can be slippery when wet in sections. Any high clearance vehicle is recommended. 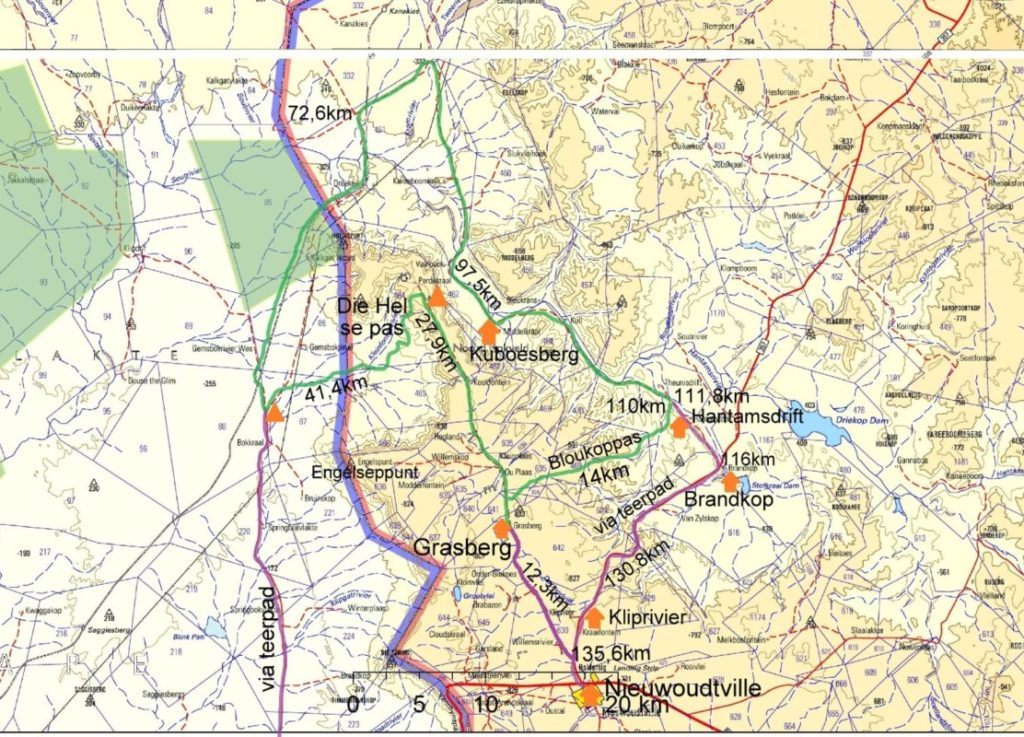 This ‘just-launched’ spectacular dirt track route starts and ends at Grasberg Guest Farm (Mandie Kotze – 083 7722 918), just 12km north-west of Nieuwoudtville. It takes in a 480-metre descent down Hel-se-Pad Pass, traverses about 60km of the one-of-a kind Knersvlakte, and then heads back east up a picturesque kloof out of which you eventually climb up a jeep track pass (about 300 metres) known as Bloukop. The return route is along an elevated plateau back to Grasberg farm.

The route is about 125km long and can be done at a relaxed pace in about 3.5 hours.

The roads are predominantly public throughways and there are therefore no costs involved, but you do the route at your own risk. There are a few rules: the Kotzes and all the surrounding farmers request that all gates be left open or closed, as you found them, that you stick to the roads, that no fires be made and no litter be left behind. Driving skills required are The best time of year to go is April to September – avoid the hottest months of the year.

For a more detailed version of the story, with accommodation tips and activities, grab an October issue of SA4x4 Magazine.