Barefoot Adventurers Club duo, Calum Buckmaster and Willie Badenhorst, have just returned from a seven-month travel fest through eight countries in a 400cc diesel-engined Tuk-Tuk – top speed 40km/h. All to raise awareness for the endangered species of southern Africa.

“What are you Mzungus doing?”

A fairly typical greeting from people we met – including policemen. Friendly, but puzzled and amazed. Fair enough.  It’s not often you see a couple of young blokes in remote Africa in a little cargo Tuk-Tuk.

The idea stemmed from the time we – two long-time mates – undertook an epic 8500km road trip in a trusty old Hilux 4×4 through Botswana, South Africa and Namibia. That was a great trip, but it left us wanting more.

With a hankering for more travel and adventure, and an urge to give something back to the continent we love, we cast our minds about − looking for something challenging (and a little bit crazy) that people could get behind.

What to do? Something long, something hard, something different. Taking a Tuk-Tuk from Cape Town to Nairobi seemed crazy enough.

Why? Having been born and raised in Africa, we feel a deep connection to its sustainability, and with conservation a hugely pressing issue on the continent, we chose this “Expedition for Endangered Species” as a valuable cause to promote.

Four months of creating proposals and targeting corporates (a completely new process and hard learning for us) generated more and more interest in the idea. We finally acquired the needed capital through five corporate sponsors (see box) and the generous support of friends and family, as well as some crowd funding. (We’ve since been told that a lot of the support was from older people who wanted to re-live their former adventures vicariously through us – the spirit of adventure never dies!)

There are a few places to buy Tuk-Tuks in South Africa. Ours came from Port Elizabeth.  Most people know the “taxi” Tuk-Tuks which have a shaded passenger seat behind the driver, who sits centrally up front. Instead, we chose a 400cc diesel Atul-brand cargo carrier, as it meant we could carry all the required gear for the trip safely, as well as occasionally sleep in the back. 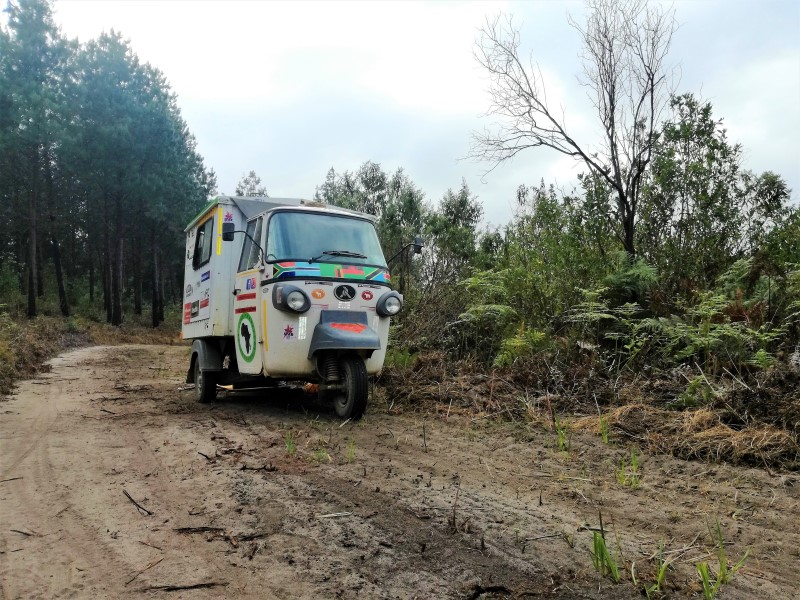 Made in India, it is slightly slower than the conventional Tuk-Tuk, having a top speed of 40km/h. However, it is more fuel efficient, getting up to 30km per litre.

Given that it was a one-person vehicle that was now required to carry two (and more), we needed to make some modifications to the cargo box. Grinders are wonderful things − in no time, we had three windows including a transition window from the driver’s seat to the cargo box, an extra-wide front seat and – what every young fella needs – a great sound-system.

We affectionately named him after the popular South African colloquialism that refers to a male friend – “Bruski”. After all, this was our mate who would traverse eight African nations with us, all the way to Kenya. We also referred to Bruski as ‘the Beast’ to emphasise its durability.

After transit to Cape Town, then pimping the Beast with flags and the application of sponsors’ and expedition signage, and night-before installation of a “Spot” tracking system, we were ready to go…almost. Willie, meanwhile, was lending a hand to the Knysna fire rescue en-route, and there were storms in Cape Town, resulting in a six-day delay of the predicted start of the expedition.

It wasn’t a teary farewell – rather a joyous and somewhat envious send-off from good mates as we left Cape Town on 12 June, 2017.

Two days before departure, we linked up with Corban, another old mate of ours. His enthusiasm and adventurous spirit saw him pack his bags and jump on-board with only two days’ notice.

We chose to go straight up through the Karoo, mainly because we’d had very little experience of driving a Tuk-Tuk, and were nervous of big roads, bigger trucks and police. (Fact is, we were …um, slightly illegal: three-up in a one-man vehicle, with none of us having the required motorcycle licence to drive a Tuk-Tuk.)

Taking the R355 gave us 211 gruelling kilometres of corrugations and sharp rocks. Minus-zero temperatures weren’t great with bare feet, but the gorgeous sunsets made up for some of it.

Bruski showed his toughness by completing the test with zero issues. Our kidneys rattled; it was freezing cold… we now knew what we had got ourselves into. And we were thrilled.

We were filled with trepidation as we approached McCarthy’s Rest, our first border crossing. The nerves were completely unwarranted, as our only delay was the requirement of endless photos as police and border officials posed in, and around, the Tuk-Tuk. 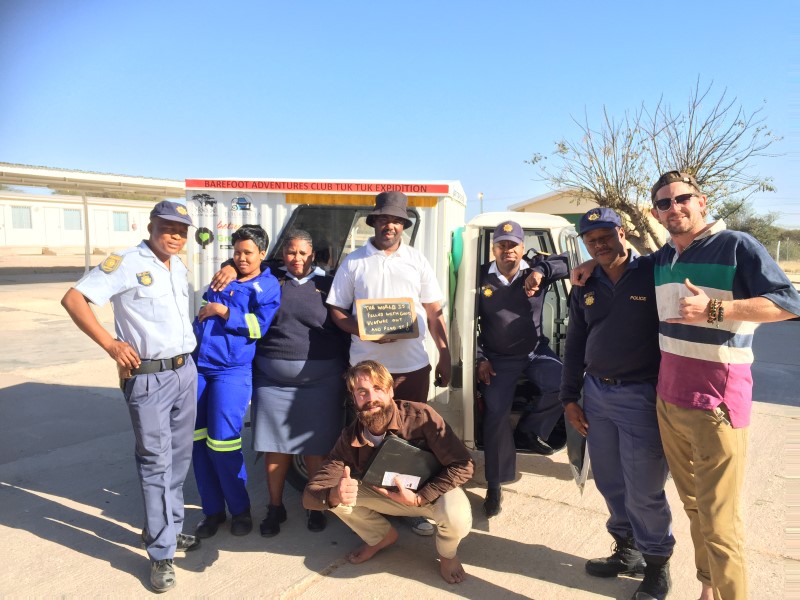 More delays at every border post as officials laughed at our Tuk-Tuk.

After many kilometres of sandy, bumpy roads to get to the border, it was a temporary relief to hit the sweet tar in Botswana. Relief was temporary, because the 500km stretch of dead-straight tar from Tsabong to Gaborone at 40km/h can be a bit tedious. The music helped. Some of us even learned to read!

In Gaborone, where we were all raised, we could recover, eat well and wash. We met up with sponsors, and spent time with one of our beneficiaries, Mokolodi Nature Reserve, which promotes conservation through a very strong environmental education programme which has benefited more than 250 000 kids since its inception. 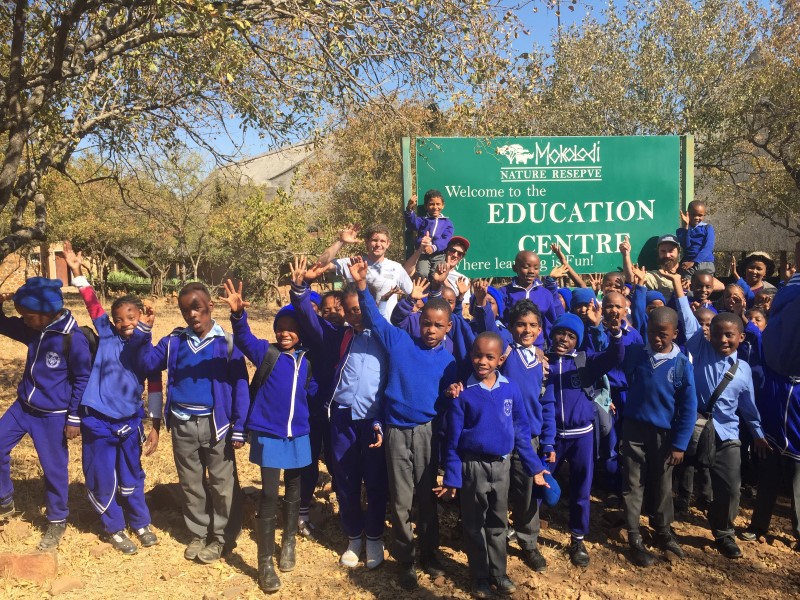 Welcome interlude at the Mokolid Nature Reserve in Botswana.

We also picked up Eric, another old friend, which meant the Bruski was now four-up, plus spare tyres, fuel, food and kit. No worries; the simple suspension was more than up to it. This became common on the trip – four people on board our (supposedly) one-man machine.

Thanks to another of our Sponsors – Bokomo – we were able to obtain supplies at Spar right through our stay in Botswana, which was an extremely helpful addition to the expedition.

Our “run” had also been timed to enable us to attend the annual Race for Rhinos air-race event on Sua Pan, of which all proceeds are donated to the conservation of rhinos in southern Africa. The three-day event was a fantastic experience, and particularly meeting committed people having their own adventure while contributing to the welfare of this endangered species.

We also got to meet the people behind another of our beneficiaries, “Elephants without Borders”. Botswana has by far the largest number of elephants left in the wild, but they are constrained by human encroachment. EWB plays a major role in mitigating the inevitable conflicts.

Leg 3 Zambia: Carnivores at Greenpop and a scary prince

The ferry-crossing of the Zambezi into Zambia was a thrill: we were able to jump the three-kilometre-long queue of trucks in our tiny Beast.

Our next destination was another of our beneficiaries, the Greenpop Festival, near Livingstone. Greenpop is a charity that plants trees and promotes permaculture. We spent a week with them, planting trees and helping where we could. The diet was largely vegetarian, which we enjoyed. However, we couldn’t resist the urge to sneak into town and treat ourselves to some Hungry Lion chicken from time to time. That was when Eric left us, to return to Botswana, the land of the steak!

Shortly afterwards, we picked up Derek the cyclist; after strapping his bike to the roof of the Tuk-Tuk, he ended up joining us for about a month. This picking up of travellers en-route became something common on the trip.

An urge to dodge big trucks and to see Lake Kariba had us peeling off the main highway at Chisekesi, and trundling down stunning dirt roads to a small village on the edge of the huge man-made lake.

In the village, we encountered a man dressed to the nines − so much so that he stuck out almost as much as we did. We were told he was a prince of this region in Zambia. He generously offered to give us a boat ride on the lake – which sounded good. But, as this was his area, he felt the need to carry his butt-less AK-47 with him at all times.

The way he handled the Kalashnikov while we were getting onto the boat did not inspire any confidence in us, and when he fired off a few rounds right in front of us, we began to seriously question his sobriety.

While the prince was splashing water on his face to sober up, we managed to enjoy a relatively peaceful ride out through a gorge onto the lake, from where we could see the Zimbabwe side.

After that hair-raising little adventure, we sought some serenity further along the lake, and were soon travelling parallel to the lake on a stunning and well-kept tar road. Once we’d reached Siavonga, we were fortunate to be accepted by Fish Eagle Lodge and Lake Safari Lodge, both of which are located on the lake-edge.

Some long drives followed as we headed up through Lusaka, and east to Malawi. This often meant driving during the night: a scary proposition in the little Beast.

The night before we crossed the border, after kilometres of flat roads at our normal pace, we were presented with some rewarding downhills. It was here, at some unknown time of the night, that we hit our speed record: a whopping 80km/h. That was a whole new level of scary − to get that speed, you have to hold the clutch in tight and roll! And, as we wound our way through the hills, it often felt like the front wheel was lifting and we were about to take flight.  The whole vehicle rattled like crazy, similar to an aircraft taking off. 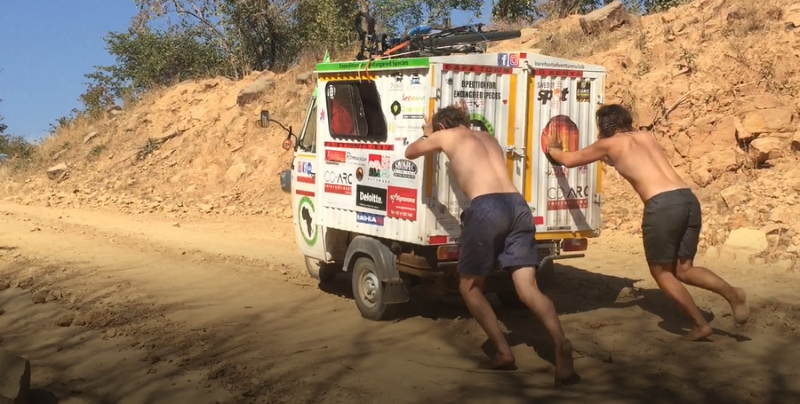 Pushing was required more than once – this time on the dirt road to Lake Kariba.

For the rest of this thrilling adventure, grab the June issue of SA4x4 Magazine.