There it is, a snorting beast up to its neck in mire that has the viscosity of bathroom sealant. The cloying sludge lies inches beneath an exhausted cow’s nostrils, which are desperately vacuuming in a mixture of air, water and filth. Having wandered too close to the edge of the Senqu River ten hours before, the exhausted bovine’s neck muscles are failing to prop up the weight of skull and horn. Suffocation is inevitable.

Rewind five days to a bright, crisp Monday morning, and it’s the clatter of an almost 70-year-old engine being swung into life that drags me from a beery coma. After some bemused rubbing of eyes, I reluctantly crawl out of my dew-covered tent to witness an intrepid conglomeration of ancient Land Rovers and their eccentric owners, already raring to go.

Thick mist rolls down the Drakensberg, up a river’s bank, and between the old trucks. This is the trigger that signals a magical adventure’s beginning.

Our clattering herd of ten Series 1 Land Rovers have come together at the Splashy Fen campsite near Himeville in the Underberg for a special voyage. Our convoy will rattle its way up the soon-to-be-tarred Sani pass, along new Chinese-built roads to beyond Thaba-Tseka, all the way to the Katse Dam and then further north still. We will be avoiding tar, where possible.

Though no doubt a good giggle – what with a Kingsley Holgate, an actual witch, and Indiana Jones himself along for the ride – this journey is more than just a trip for the sake of it. This is, after all, an expedition under the tutelage of Holgate.

First things first, and with only a couple of clicks on the odometer, we stop off at a rural school in Himeville as part of a Rhino Art project. The kids had each splashed some colour into the outlines of a
rhino and added their own touches, along with a word or two to poachers. As one boy explained in graphic detail just what he thought poachers deserved, the aghast look on Kingsley’s face was priceless. Safe to say that given this young lad would make a good hunter. Yet another will be a bicycle. Worth every scratch of a crayon.

Another initiative, started by the late Gill Holgate (Mashozi in Zulu – ‘She who wears shorts’), is the Right to Sight campaign. Supported by Land Rover, the aim is to distribute spectacles to poor-sighted elderly people in rural areas. 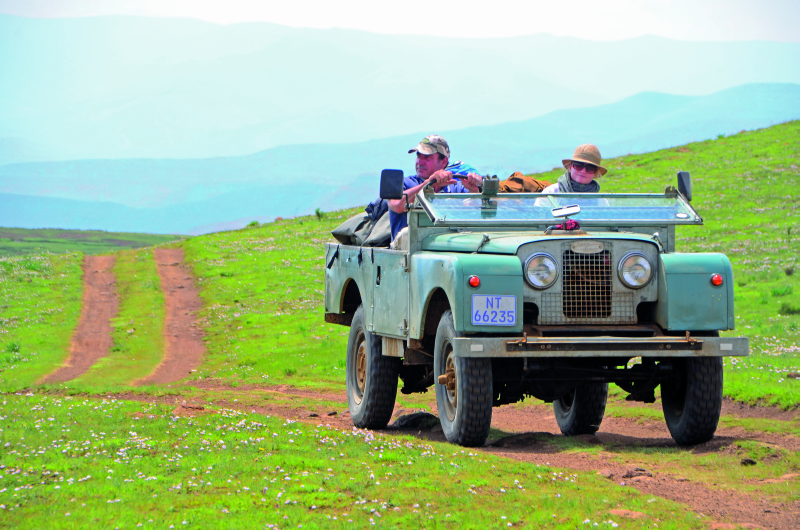