Having been involved in several severe 4×4 challenges of late, it came as a welcome relief to tackle the Nossob Eco Trail, which runs through the remote Kgalagadi Transfrontier Park. Here was a chance to enjoy open wilderness without any stress about vehicle damage. Starting at the Twee Rivieren post right on the border of Botswana in the Northern Cape’s most northerly point, the five-day, four-night trail begins at the point where the Aoub and Nossob river intersect – hence ‘Twee Rivieren’.

These rivers flow only once every century, but, even so, are lined with massive camelthorns and populated heavily by antelope. Because of the remote location of camp sites, and their lack of any fencing to provide security − animals range from hyena, to leopard, to lion − the Nossob trail is a guided-only route, and perhaps the most educational and secluded nature trail in the Kalahari and surrounds.

It is also a proper back-to-basics experience, and trail drivers need to be fully self-sufficient in terms of water, food and fuel. Just the sort of thing we at SA4x4 relish – a chance to use our vehicles, and all their kit, for what they were intended.

Originally established in 1931 in an effort to quell rampant poaching, the ‘Kalahari Gemsbok Park’ would later become the Kgalagadi Transfrontier Park, which would allow animals and humans alike to roam freely between the South African and Botswana borders sans fences. Spanning over 38 000 square kilometres, it’s easy to get lost, so many of the park’s hidden treasures are accessible only with a guide. These treasures include the Nossob trail, which starts either at Twee Rivieren or at Nossob, and changes direction every month to reduce damage to the dunes from spinning wheels.

Spanning the 300km distance between the Twee Rivieren control post and Nossob camp in the north, the trail beings each day with a leisurely 9am departure, allowing our convoy a slow drive of around six to eight hours a day (50-60km) before arriving at camp comfortably before sunset.

It is due to the frequent stops and relaxed pace that the sandy trail never becomes a chore. It also means that despite its being relatively short for the time spent, one is able to take in the massive diversity of bird- and plant life – which, given the dry and dusty conditions of this semi-desert, never ceases to amaze.

Sociable-weaver nests are a frequent feature, their bulk straining camelthorn trees to breaking point, as are sightings of Black Korhaans as they ‘clack-clack’ overhead.

At one point, we even managed a rare early evening sighting of the common spotted Afrikaner male, chasing a yellow mongoose that had stolen a massive section of boerewors right off his plate. At least karma was on the side of the Afrikaner (name withheld to preserve dignity) when the mongoose came to an abrupt halt on discovering that the hole it was trying to escape through was half the width of the sausage.

After about 50km of steady driving from the entrance to the park, the Nossob trail starts with an unassuming tweespoor track moving eastwards off the main tourist road. A no-entry sign and a skittish honey badger mark the start of the trail, and, as nobody else is permitted on it, the feeling of isolation sweeps over the convoy as we push deeper along the red dust track.

Soft sand and high dunes link together in serpentine zigs and zags as a grassy tweespoor track meanders its way through scenery that varies between open cheetah country and camelthorn thickets.

Our guide, Ivan Bok, tells us that he spends three weeks of the month out on the trail, and he clearly knows every inch of it in great detail, as he shows us fascinating plants and animals that we’d otherwise miss.

To consider the Nossob a driving challenge would be completely missing the point; the intricacies of discovering the smallest animals make the adventure a veritable treasure hunt. However, the sections of soft sand on the mostly grassy tweespoor track are soft enough (particularly in the heat of midday) to warrant dropping tyre pressures by 50%. 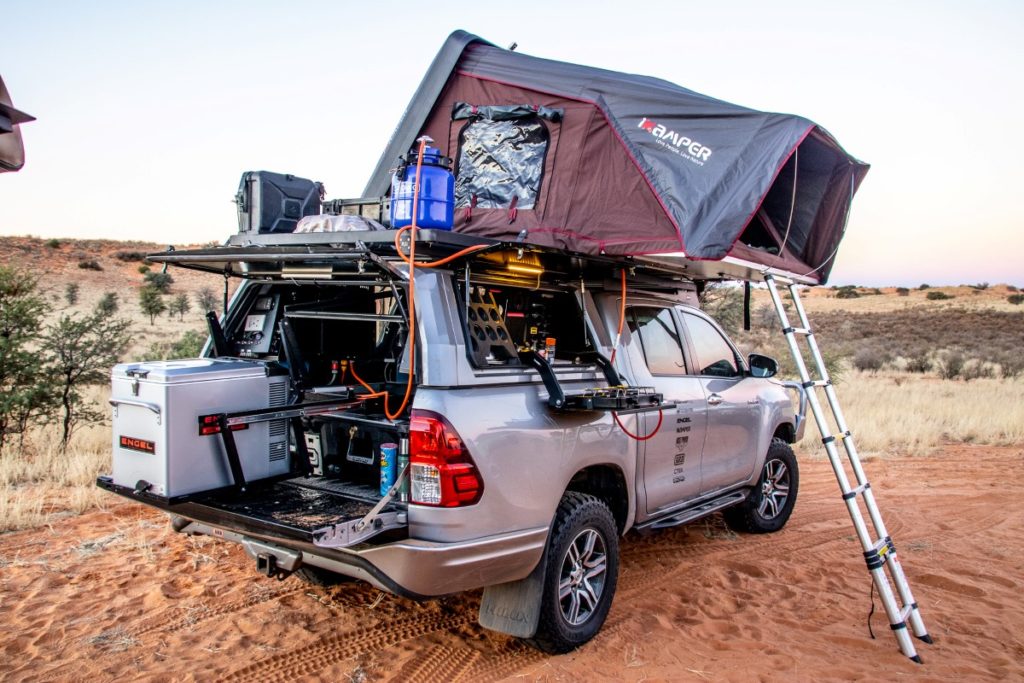 Mike Voss from RSI bought a stunning-looking Hilux with a full suite of RSI goodies, as well as upgraded Old Man Emu suspension and ARB bumpers fitted by 4×4 Megaworld. His Hilux is a 2018 2.8 Double Cab automatic.

The latest innovation from his company is the new SmartCanopy EVO range, a stylish step up on the existing SmartCanopy offering. Mike’s car had the company’s built-in inverter and dual-battery power pack, which was providing the juice for an Engel fridge fitted on a nifty drop-down slide.

Another innovation from this company is the SmartRack, which allows one to drop the rear section of the roof rack downwards for easy access to whatever is up there, before sliding the mechanism back up and clipping things securely in place. RSI’s updated Smart Kitchen, featuring a full complement of cutlery, crockery and a kettle, plus a two-burner stove on a new simple fold-out strut, is also a boon when it comes to chef duties. Mike was also happy to demo his gas powered hot water system with its quick-set-up shower head and shower enclosure, pulling from a 70-litre storage tank. A low-slung imported drawer system with integrated cases provides packing space for all belongings, and the build featured the iKamper clamshell roof-top tent. This RSI set-up is designed to cater perfectly for two people living off the grid. Some of the kit and retail pricing (inclusive of VAT) is listed here.

Delivery and fitment in SA

Shower system (R9500 depending on options)

Fully equipped, including a twin-burner gas stove and cutlery with pots and plates suitable for two people. 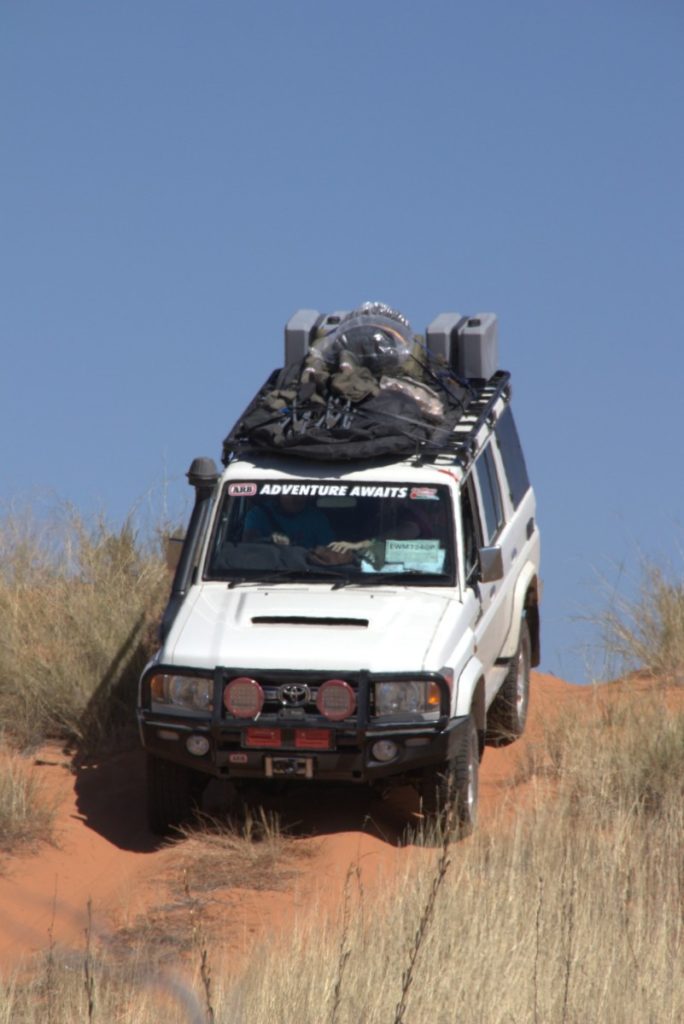 One of the 4×4 Mega World Cruisers.

Sporting a trio of V8 70 Series Land Cruisers in different configurations, 4×4 Megaworld pulled out all the stops with some of the latest gear from their own brands, as well as some items from RSI – including the canopies and kitchen units.

The latest Old Man Emu flagship BP-51 suspension provides exceptional comfort, control and reliability by employing progressive damping and race-bred tech. Only the best tyres would do for Megaworld: Micky Thompsons and Coopers were chosen for the task and have proved themselves up to it.

Of all the accessories fitted, the most eye-catching has to be the new ARB Linx Vehicle Accessory Interface. Linked to the ARB smartphone connected to the windscreen, the Linx acts as a heads-up display and offers full accessory digital integration. The Linx monitors it all, and controls everything from the air-suspension system to tyre-pressure monitors, voltage and speed. Taking the place of traditional switches, the Linx helps de-clutter the interior, all without the need to drill holes in the dash.

4×4 Megaworld chose not to publish individual prices on their accessories, but urge readers to take a look at their website for the latest listings. www.4x4megaworld.co.za

For the full adventure, be sure to grab a copy of the November issue of SA4x4 Magazine!