There is a long-running debate, not just in our offices, on which is the toughest, meanest off-road event in the world. The US has King of the Hammers, Mexico hosts the Baja 1000, South America is the adopted home of the Dakar Rally, and Australia hosts the Outback Challenge. After a trip across the Pacific to check out a little event with a big reputation, it’s clear that Southeast Asia has another contender for the Badass Top 10: the Rainforest Challenge (RFC). 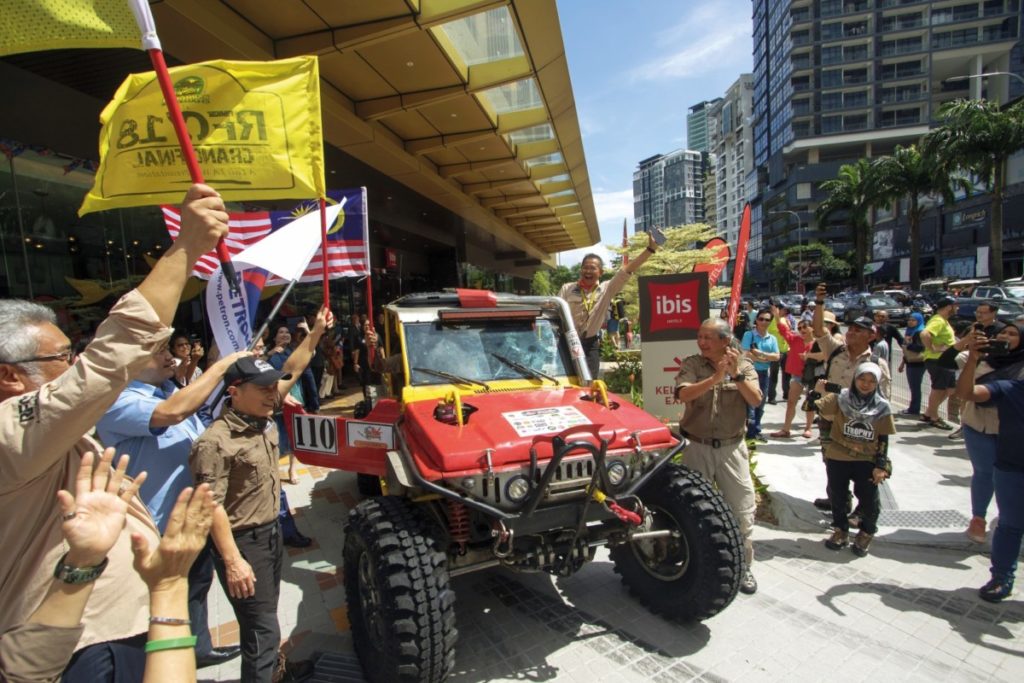 We arrived in the Malaysian capital of Kuala Lumpur to a gala parade, grand presentations with local dignitaries, and some radical competition rigs. Vehicles flew flags from Russia, China, Japan, Mongolia, Ecuador, and a host of other countries, and a truly international group assembled for the driver’s orientation.

Chatting with founder Luis Wee, we learned that RFC and its various chapters host events in nearly two dozen countries throughout the year. The Malaysian venue just happens to be the grand finale. Considering the fact that the country is 50% jungle and averages nearly 250cm of rain annually (380cm where the event takes place), it is the ideal locale for a mud slog of epic magnitude. We were told that the 2018 event, the 23rd annual, would be relatively dry, but soon learned that in Malaysia, ‘dry’ simply means less wet. 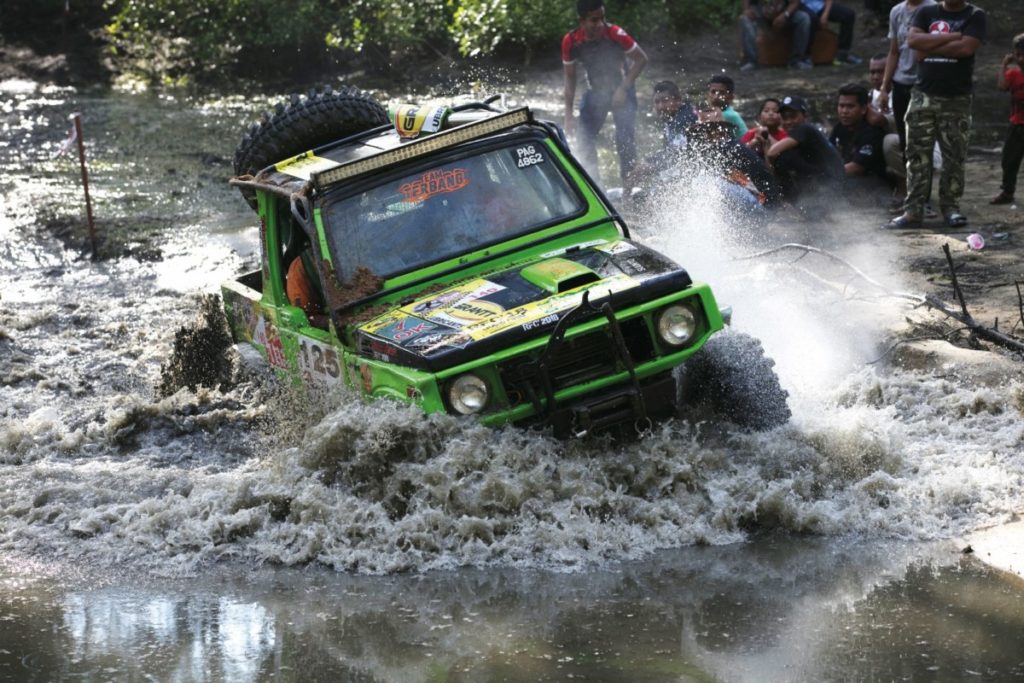 The Prologue and Predator stages of the first two days are a bit of a warmup and consist of a dozen flagged tracks through hill and dale near the coast. Day 3 found us deep in the Northern Highlands – where civilisation ends and the jungle begins. Organisers, support crews, media, and race teams must be fully self-contained – the longest stretch between fuel sources entailed 600 kilometres of muddy two-tracks.

While the RFC is similar to other off-road contests, in that the goal is to go from point A to point B in the shortest elapsed time, the equipment and techniques required to do so are specific to the weather and terrain at hand. Malaysian soil consists of fine red dirt and clay, and Mother Nature sweeps through each winter packing a soggy punch… the monsoon. 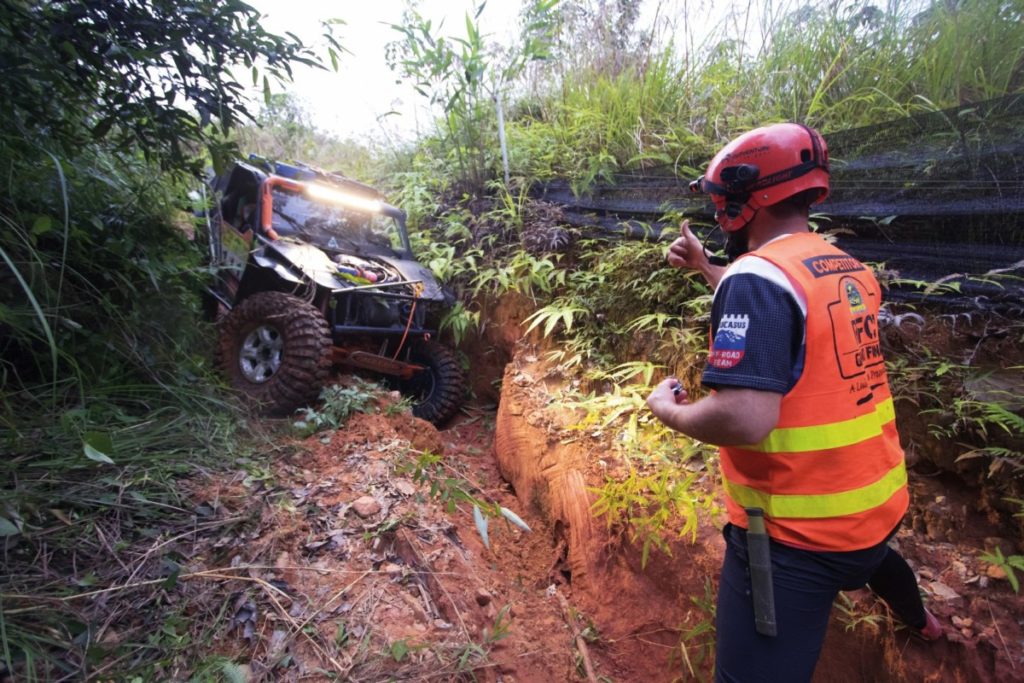 Vehicle classes and scoring are quite simple. Each of the 34 special stages (SS) are worth 100 points to the winner; those who follow receive a fraction thereof. Classes are broken down into three categories: Prototype, Production, and Modified Production. Each class is further subdivided by fuel type, displacement, portal or non-portal axles, team gender, etc. Although maximum tyre diameter is 40 inches, most run smaller rubber. The reason is that courses pass through dense brush barely wide enough for a UTV. We found that the Suzuki Samurai is by far the most common vehicle, and rigs such as an FJ40 Land Cruiser are considered large and have a distinct disadvantage in some areas. Unlike many events, the daily starting order is determined by lottery. Everyone gathers for the morning meeting and pulls a number.

The Lost World and Survival stages have distinct characteristics. Lost World finds drivers hacking paths through the bush, stringing winchlines, and riding ground anchors, while Survival pits them against deep flowing rivers strewn with large boulders. The mountainous terrain and daily rainfall lent perfectly to unstable trail conditions. Log bridges needed to be repaired or were non-existent, and teams often found themselves building new ones from scratch.

A tentative schedule is outlined at the beginning of the event, but depending on Mother Nature’s mood, the following days are fluid… pun intended. If it rains like hell, rivers swell and are impassable, and a two-hour mountain pass might take all night. One day, on what was to be a seven-hour transit drive between bivouacs, we found ourselves at 03:00 the next morning winching our vehicles daisy-chain-style through knee-deep mud.

One of the RFC’s trademark elements is the Twilight Zone. After a full day of competition, teams head out for an unsupported overnight slog through the jungle. They are dispatched in groups, as the Kelantan region is a true jungle, replete with roaming elephants, venomous snakes, scorpions, and Malayan tigers. It is a dangerous place, especially at night. The media can opt to stay in camp or enter the Twilight Zone by hitching a ride on the back of a race-car. We opted for the latter and found ourselves humping it over muddy mountains until the wee hours. Due to the technical challenges, scoring is a bit different. Anyone who survives and makes the 07:00 time cut-off the next morning receives the full 100 points.

Malaysian mud does the Devil’s work when it comes to silencing your vehicle’s pulse. After 10 days in the gooey stuff, we can tell you that the RFC is one tough event. The website states it is ‘not for the faint of heart’, and we wholeheartedly concur. It is not only brutal on competitors, but everyone involved. If brushing mud out of your teeth, sleep deprivation, and wearing soaked clothes and soggy boots until your travelling mates give you the stink eye are your idea of fun, then the RFC is your ticket to ride.

Interested in running the RFC but don’t have a rig? No worries! The organisers can put you in touch with outfits that hire out race-ready vehicles. Crazy, eh? The cost is just over R50 000, and if you choose this route it is highly advised that you arrive a few days early to give the car a thorough evaluation and become familiar with its systems. They don’t offer full-damage insurance waivers (or any insurance) so we suggest driving it like you own it rather than you stole it…the AA will not come get you when you break down.

We often assess the difficulty of an event by the number of teams that see the chequered flag. When the mud settled, more than 50% of the field had broken, crashed, turned around, or were on the receiving end of a tow strap. In seven days we had traversed more than 900 kilometres of dense jungle, building bridges, winching until sunrise, and dodging scorpions. Would we agree that the Rainforest Challenge ranks in the top 10 toughest events in the world? Lima Charlie on that one. Time to put together a local team? www.rainforest-challenge.com