Verdant coastal forests that extend almost to the water’s edge. Thunderous breakers that pound jagged rocks. Golden sands. Impossibly beautiful night skies. Mischievous monkeys, slithering snakes and graceful antelope. All coupled with a remoteness that brings on a sense of peace which can’t really be put into words. But I’ll try.

Asked to describe Dwesa Nature Reserve in a paragraph, that’s my take on it. You see, visiting this pristine 3900-hectare Wild Coast reserve is like stepping back into the age of the dinosaurs. Standing on the wide expanse of beach in front of the cottages with no one else around can make you feel like the last person on Earth. It’s a completely primordial yet intoxicating feeling that will keep you going back for more.

Fortunately, you won’t have to worry about fighting off a Tyrannosaurus Rex when visiting the park. Though wild animals abound, the only dangerous ones you’ll really need to keep an eye open for are crocodiles in the rivers and buffalo. On the grasslands you’re likely to spot zebra, eland, blesbok, wildebeest, warthogs and bushbuck. But on my most recent visit, I was after something different – fish.

Dwesa is actually half of a bigger reserve named the Dwesa-Cwebe Wildlife Reserve and Marine Sanctuary. The two “halves” are separated by the mighty Mbashe River, dividing Dwesa in the south (the larger of two) from Cwebe to the north.

In December 2015 a series of controlled zones within the marine protected area were thrown open to small-scale fishing. The move was not welcomed by everyone (some likened it to allowing hunting in the Kruger National Park), but under pressure from local communities since 1981 for customary rights to fish the area, government finally gave permission for “livelihood” and recreational fishermen to ply their craft in the reserve. 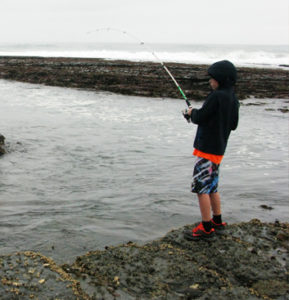 Strict regulations govern what fishing permit holders can do. For instance, no fishing is allowed in various restricted areas which form a buffer zone along estuaries and river mouths where indigenous fish species breed. Spearfishing, fishing from a vessel, the use of a net and fishing at night are also prohibited.

The warm Indian Ocean waters off Dwesa- Cwebe are home to dusky kob, blacktail, bronze bream, white steenbras, galjoen, spotted grunter, garrick and Cape stumpnose, amongst others. All are safe from me.

You see, while I enjoy fishing, I’m not really that good at it. It’s more about being out in nature than actually catching anything. I can regale you for hours on end about the one that got away, instead of the one that landed on my braai grid.

Accommodation at Dwesa comes in the form of seven wooden chalets: four 2-sleepers and three 4-sleepers. We also counted 40 campsites. The two-sleeper chalets come with a double bed while the four-sleepers have a double bed and double bunk each. There is no electricity, so if camping you need to be totally self-sufficient.

A gas fridge is a must if you’re planning an extended stay, unless you can rely on solar panels and a good bank of batteries. The campsites are grassed and many offer shade, while all have brick braai places. Drinking water is available. The separate male and female ablutions have showers, toilets and basins and hot water is supplied via a gas geyser.

The chalets, which are also equipped with gas geysers, come with a gas fridge and stove, paraffin lamps, bedding and cutlery and crockery for four. Ours had a Weber which we used to braai on the deck. All wood needs to be brought in and we opted for briquettes simply because they were easier to pack. Other essential items to bring include binoculars, camera, a sun hat, sunscreen, fishing gear and a cream or spray to ward off mosquitos. Limited cellphone reception is available.

For more information or to book go to www.visiteasterncape.co.za, telephone 043 701 9600 or e-mail reservations[at]ecpta.co.za.