With its coarse dark fur, and long ‘hangdog’ face the Chacma Baboon (Papio ursinus) is an easily recognisable bushveld inhabitant. Less well known is the origin of its name. The word “chacma” is derived from the Khoikhoi name for baboon, choa kamma, possibly onomatopoeic for their barking call; whilst the word baboon is derived from the French babouin, a name given to them by French naturalist Georges-Louis Leclerc, Comte de Buffon (Whew! No wonder he is referred to only as Buffon in most literature!). 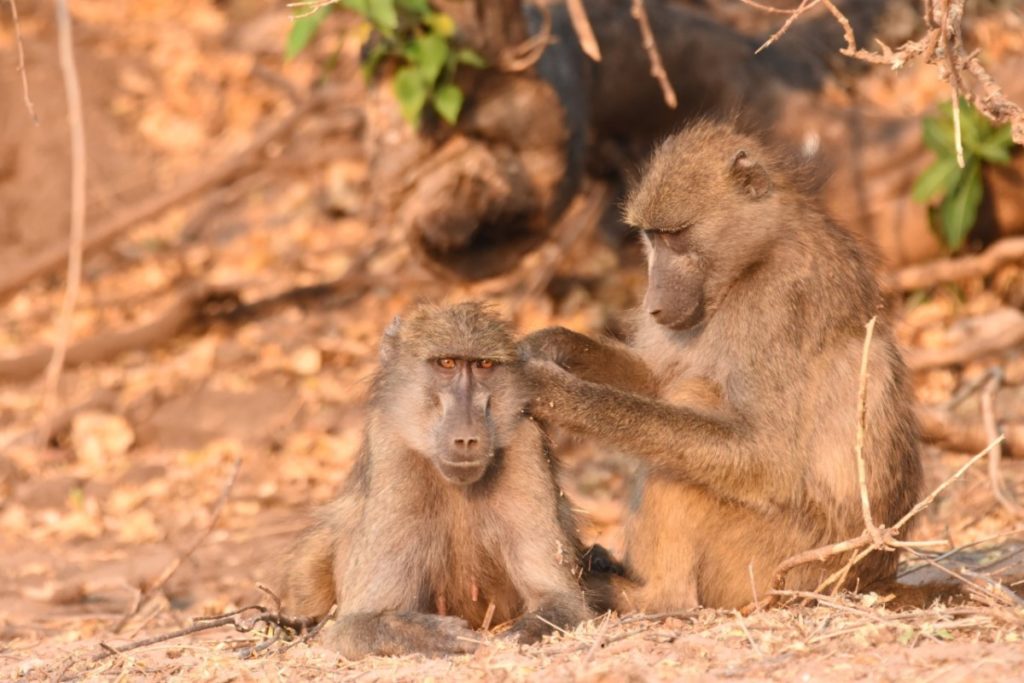 Modern baboons evolved as a distinct lineage prior to 2.5 mya. However, only with the advent of mitochondrial DNA testing was it revealed that approximately 1.5 mya a deep split arose in the Chacma lineages; resulting in the northern (Chacma ursinus griseipes) and the southern (Chacma ursinus ursinus) clades.

Baboons are highly social animals, living in troops which may number more than 100 individuals. Within a troop, adult males form a dominance hierarchy that is established and maintained by displays of aggression such as staring, chasing, and baring of their formidable canine teeth. In a fully-grown male these may be 5cm in length, longer than those of a lion, although less robust.

Male ranking is unstable, seldom lasting more than a year, as young males tend to move between troops once they have reached sexual maturity. This means that high-ranking males may be displaced by younger immigrants. By comparison, females remain in their natal troop and form strong hierarches that span generations. Grooming is an important activity that is used to form and strengthen relationships among troop members. 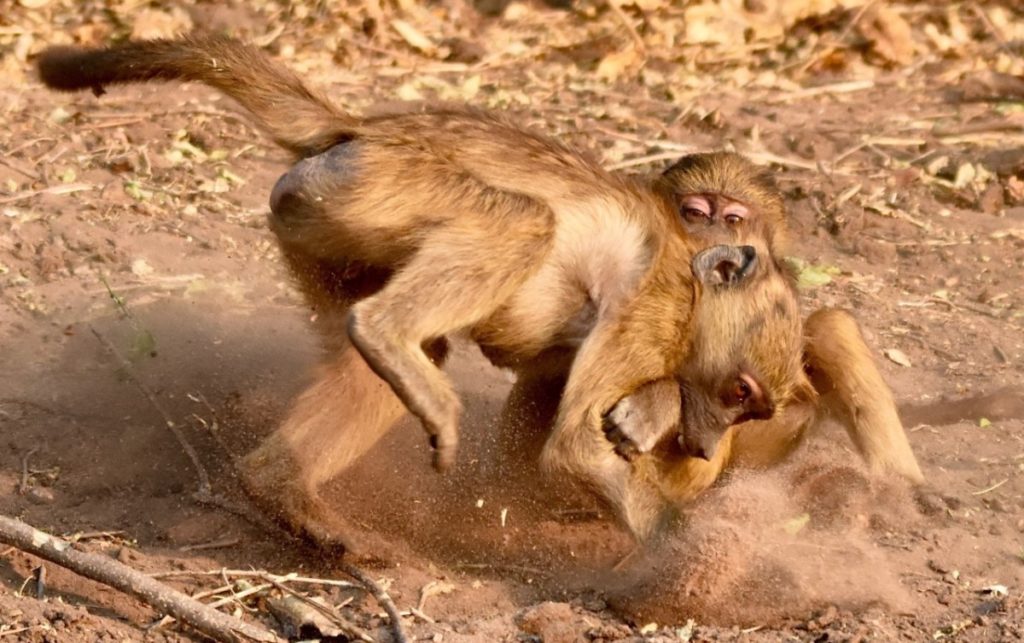 Baboons are creatures of habit and their daily routine is very similar in structure to that of the average human family. They rise by 8am, groom themselves whilst the youngsters play, then set off in search of food. They can cover up to 10km in a day, with a much-needed snooze in the midday heat. In the evening they return to their roost site for another session of mutual grooming before settling down for the night. Without too much imagination one can see how our timeline of wake up, shower, school-run, work, gym, home, dinner, shower, sleep, mirrors theirs. Their ability to also incorporate an afternoon siesta definitely suggests they plan their days’ better than I do!

Baboons are generalist omnivores, but their diet consists primarily of plant matter. Consequently, it is possible that they play localised roles in seed dispersal for the plant species they consume. Indeed, it has already been shown that baboons are important seed dispersers in southern Africana savannas of species such as the Buffalo Thorn (Ziziphus mucronata) (Slater & Toit 2002). Recent research by Tew et al (2017) has shown that in subtropical thicket, baboons are able to disperse at least 24 different seed species. This is a wider range of seed species than those dispersed in this setting by a broad array of birds, reptiles or other mammals. She maintains that baboons may become more crucial to seed dispersal in arid subtropical thicket areas as climate change alters the distributional ranges of plant species and states that “this important role as endo-zoochores (in normal speak ‘animal seed dispersers via digestion’ – words mine) highlights the need to conserve, rather than persecute, chacma baboons.” 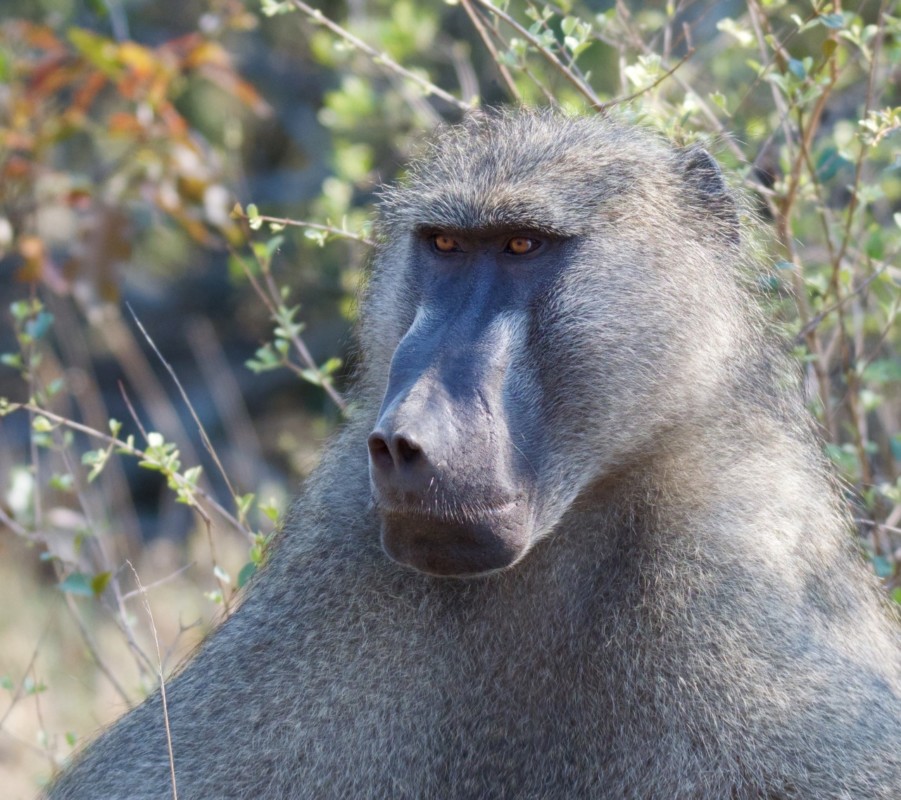 In areas where baboon and humans occupy the same spaces, they are frequently regarded as ‘problem animals’ because of their tendency to raid crops and steal food. It is important to remember though that they are not normally animals who willingly look for conflict. However, due to increasing urbanisation and habitat loss they have been squeezed into less and less land. Unable to sustain themselves by foraging naturally, and being inherently opportunistic, when they recognise favourable new opportunities, they take them.  This means that if they detect ‘free food’ they WILL find a way to get to it.

To avoid unpleasant situations arising when spending time out in the bush, WE need to take responsibility and thus keep temptation off the table. Simple actions such as closing vehicle windows, utilising baboon-proof dustbins, leaving no food in tents, keeping foodstuffs in padlocked trunks and NEVER EVER feeding them are all pre-emptive actions that will reduce conflict. The old maxim “prevention is better than cure” never rang truer than it does here.