Home » The Wild Guide: There’s dragons in them hills

This month, I would like to take you on a journey ranging from several hundred million years ago to the present day. Although this may seem like a strangely ambitious and long safari, I promise it is one worth taking.

Our safari begins in what is now the Karoo, but 265 million years ago when rivers were depositing sediment into a shrinking inland sea. As these rivers filled the basin with sediment, eventually giving rise to a group of rocks known as the Beaufort Group, they entombed the remains of the animals that lived around them. It is in within this group of rocks that the oldest recorded fossil ancestor of living chelonians (the Reptile order containing turtles, tortoises and terrapins) has been found. Known as Eunotosaurus africanus, it was approximately 30cm long and had a rather peculiar part-lizard, part-turtle appearance.

The climate of the time was much drier than the period that had preceded it, and the lush swamp forests were gradually replaced by conifers, seed ferns and other drought-resistant plants. The drier conditions greatly favoured reptiles over amphibians, so this was an era in which the early ancestors of snakes and lizards and archosaurs also arose − the latter the first in line of the imposing ruling reptiles to come.

If we had driven through the Karoo during this period, we would likewise have seen other incongruous-looking animals comprising various species of Synapsids − often referred to as mammal-like reptiles. Best pictured as a cross between a dog and a lizard, they were the Earth’s first great dynasty of land vertebrates.

Then, around 250 million years ago, disaster struck. Known as the Permian extinction (or great dying), it resulted in the demise of 90% of marine species and 70% of terrestrial species across the globe. Occurring in as little as 100 000 years – quicker than the click of a camera shutter on a geological time scale – it took 10 million years for earth to recover.

Now, fast forward 50 million years to the area around what is now Harrismith in the Free State, and imagine a dune-covered desert crossed by large rivers. Roaming along the flood plains are animals some four metres in length, with long necks, tiny heads and well-developed hind limbs. In true safari fashion, your guide turns to you and whispers ‘Massospondylus carinatus!’  Revealed to the world in the form of a partial fossilised skeleton in 1853 by surveyor JM Orpen, and described in 1854 by famous anatomist Sir Richard Owen, this is one of the first dinosaurs ever to have been named. It’s ‘fame’ does not end there, as you will discover if you continue just 70km west to the present-day Golden Gate Highlands National Park. 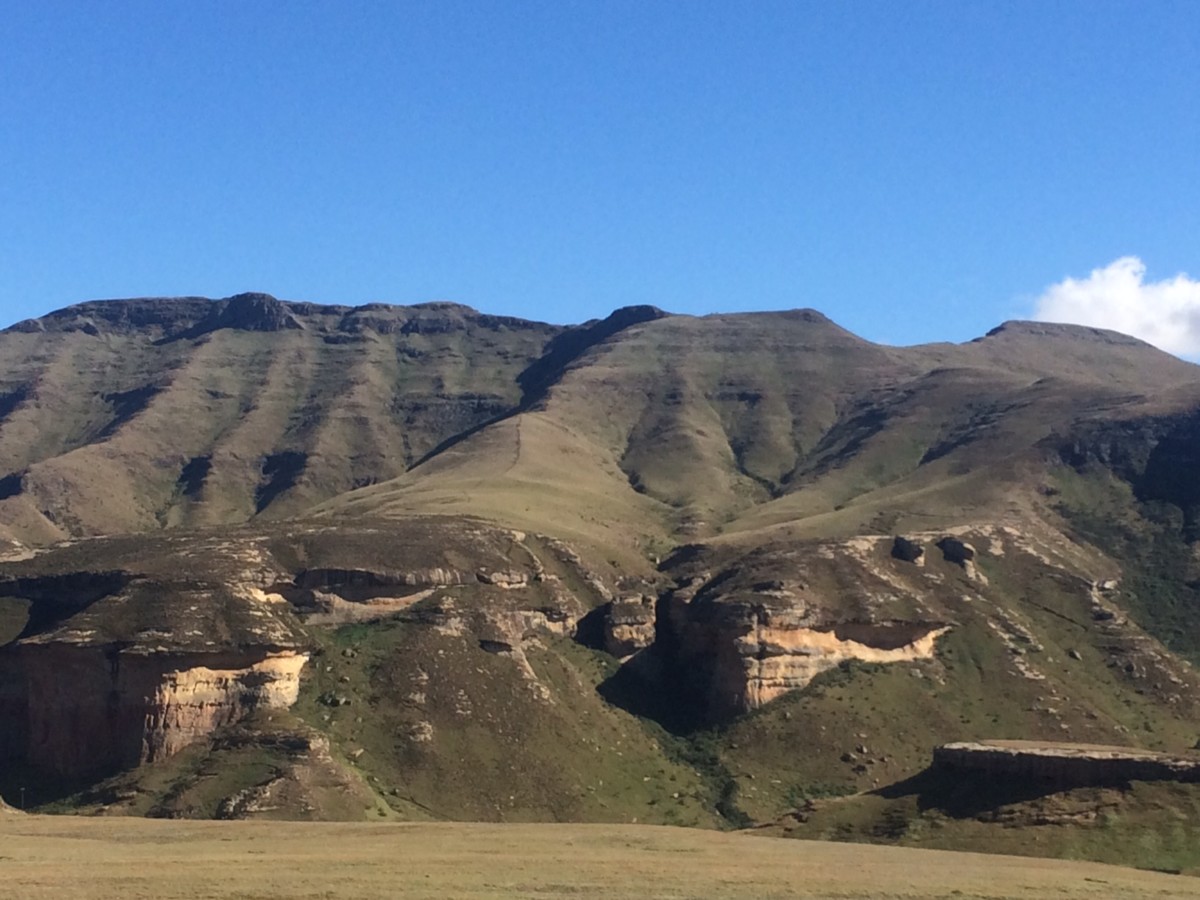 Golden Gate Highlands National Park, where clutches of ancient Massospondylus carinatus eggs have been found, suggesting that it was a dinosaur breeding-ground.

It was here in 1976 that a clutch of seven fossilised Massospondylus eggs was found by James Kitching in a road-cutting at Rooidraai. Even more remarkable than the eggs themselves – each one just three times bigger than a hens’ egg – were the perfectly preserved 15cm-long embryos they contained. They remain the most ancient dinosaur embryos ever discovered. By early 2012, at least 10 egg clutches had been found in the vicinity, with up to 34 eggs per clutch. This fossiliferous evidence suggests that large numbers of Massospondylus returned to the area every breeding season to lay their eggs and raise their offspring − the earliest recorded evidence of such behaviour.

And so to 2018, the end of our current journey, and to Smaug giganteus (the Sungazer or Giant girdled lizard), an extant species of an ancient reptile lineage. Endemic to the grasslands of the northern Free State, in areas around where its distant ancestors once roamed, it earned the name Sungazer from its idiosyncratic habit of looking up towards the sun. Its genus, Smaug, was named for the dragon ‘Smaug’ in JRR Tolkien’s The Hobbit.

According to Tolkien, the name is derived from the Old German smeugen – to squeeze through a hole. Like the Giant girdled lizard (to give the Sungazer its other common name), Smaug the dragon lived underground and was heavily armoured. Unlike its dragon namesake, however, the lizard is unable to breathe fire. While this is doubtless a relief to landowners and researchers (a fire-breathing Cordylid being somewhat disconcerting!) it is ironically, perhaps, the one trait shared with its mythical ‘cousin’ that would have prevented it from being where it is today: categorised on the IUCN Red Data list as Vulnerable. Due mainly to the destruction of its grassland habitat, but also to the pet and muti trade, there has been a recorded reduction of 30% in its population size during the last 27 years. Some scientists suggest that it is at risk of extinction within the next 10 years if nothing is done to prevent this.

We need to start paying more attention to the conservation of this unique creature, to prevent it becoming yet another set of ‘dem dry bones’ ahead of its time. I don’t know how you feel, but I would like future safaris conducted through a South Africa that is still populated with both our extraordinarily rich fossil assemblage AND our amazing contemporary biodiversity.