September marks the beginning of spring in the southern hemisphere, and, as the late Robin Williams once said, “Spring is nature’s way of saying ‘Let’s party!’”. With this in mind, it seems fitting to look at some of those creatures for which the arrival of warmer days is cause for celebration – insects.

Although these are not usually high on the list of ‘things to see in the bush’, if they are on the list at all, it really is worth pausing for just a moment on a spring day to see what you can spot. Expect the unexpected…

While the extinction of the dinosaurs ended the rule of reptiles and ushered in the era of mammals, in terms of sheer numbers our planet is currently very much the domain of insects. Three-quarters of all living species on earth are insects, amongst which the beetles reign supreme. In the African bushveld, dung beetles certainly form one of the most amazing groups of all. Evolving at least 65 million years ago, when the number and size of mammals was increasing, these beetles have proved to be not only remarkably efficient cleaners but some of them − the rollers – have proved to be supreme navigators by day and night.

Thousands of dung beetles may arrive at a single pat within an hour, so it gets crowded, fast. Removing your portion not only reduces onsite crowding and competition, but if you have already ‘scooped your poop’ and are making a quick getaway, you also have a better chance of keeping hold of your spoils.

But using the sun as a reference point (rather than a mark on the ground) a dung beetle makes sure that it is able to trace a direct path to its burrow. Knocked off course? No problem: simply hop atop your ball and re-orient yourself by making sure that the sun is once more at your back. Some species that are active at night have also been shown to use the Milky Way Galaxy for direction-finding.

Although they are unable to make out specific constellations, these beetles can determine differences in light and dark areas within the galaxy, and use these to navigate by − the first insects to have been shown to do so. Although they employ a unique processing strategy, the ‘rollers’ make up only 10% of dung beetle species. The rest of the species burrows underneath or remains within the dung pat.

Given that each dung beetle can process over a hundred times its own weight a day, and that upwards of ten thousand individuals have been recorded in a single elephant dropping, it stands to reason that we should pay attention to where we drive when we are out in the wild. If we fail to do so, not only will we cause the demise of large numbers of beetles, but sooner rather than later we will find ourselves knee-deep in the proverbial… 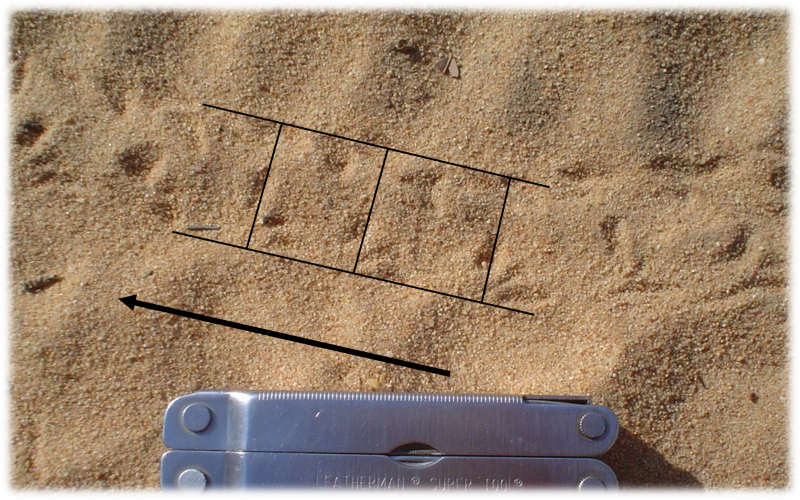 Look out for the classic ‘ladder’ track made by a dung beetle rolling its ball.

Lorraine Doyle is the owner of Africa Nature Training. This is the first article in a series on bush lore and the wonders of the African Bushveld.