The big talk at the moment is that the Nissan NP300 “Hardbody” scored Zero stars – that’s right, a fat zero – for passenger safety in a recent re-test commissioned by a philanthropic organisation styled as #SaferCarsForAfrica, and conducted by the Automobile Association and the Global NCAP organisation.

In an effort to ensure that vehicles which are exported to various countries make the cut in safety terms, this is quite laudable. The NP300 is apparently exported to about 35 sub-Saharan countries, and to places like the UAE, Russia, the Ukraine and Lebanon. It’s been an export success, and over the years, a great staple as a fleet vehicle in South Africa – the police service and military must have thousands on their books. That has to be a particularly rough and tough testing ground for any vehicle.

What the zero rating means, however, is that the NP300 is probably now destined for the history books. Gone. Finished. Disgraced. One cannot in all good conscience sell a car that might put its passengers at risk in a major shunt. But is it as bad as all that? It certainly can be no worse than its peers from the nineties. Fact is, there are many NP300s plying our roads right now, along with many thousands of its age mates.

We recently had one on test, and it was interesting − to say the least − to drive a vehicle that has remained virtually unchanged since its last major technology upgrade in 2002. It has been produced locally at Rosslyn since 1988, was updated in 1999, received that facelift in 2002 which brought it to the current look, and received a name change − to NP300 Hardbody − in 2007. That makes a production run of 30 years: an incredible model marathon by any standard.

It joins such motor legends as the Citi Golf, the Nissan Champ, the VW Beetle, the Land Rover Defender, the Land Cruiser 70 Series and even the Mercedes G-Class. All but the last two have fallen foul of safety legislation, and were given the chop. Hard to accept, too, is that both the Cruiser and G-Class (in its current form) are teetering on the brink of extinction.

Nissan, then, is famous for keeping its dinosaurs alive; and while many may mourn the Nissan Champ, it was never going to get a five-star NCAP rating. Too expensive to re-engineer. The NP300, however, has hung on over the years, and been touted as a hardy workhorse, and the ideal choice for fleet owners, builders and farmers.  This has not changed; but as everyone moves on from the nineties, and much safer vehicles are available at a nominally higher price point, it becomes much harder to justify the NP300 as a new purchase. 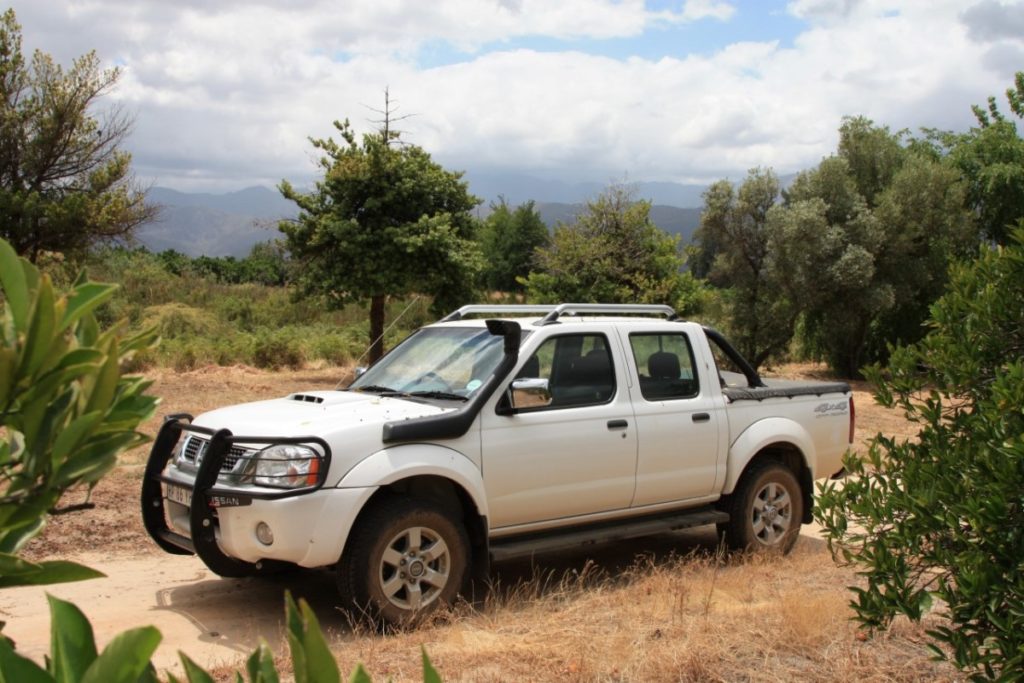 While the NP300 looks decent, has all the necessary rugged features like the roof rails and striking upright grille, and a decent-sized loadbody (1425mm long by 1390mm wide), it’s in the details of the packaging that it shows its age. Modern bakkies have a slightly longer wheelbase, usually at the 3100mm mark, while the Hardbody makes do with 2950mm. The result? Look at those rear doors on the double cab, and you see that they are very narrow – making ingress and egress difficult. The body sides are also less deep than current norms, with ergonomic implications including a shallower footwell and lower loadbox height. Seat-to-roof height is then also an issue, and both front and rear occupants tend to be sitting with their legs too high. None of it is bad, but it has been improved upon in this vehicle class.

The rest I found very functional and solid. The tailgate, for example, opens with an easy single-handle pull, there is a sturdy-looking rear bumper of extruded aluminium (less fussy than many modern vehicles), the sidesteps are quite tucked away, and the standard tyres are pretty hardy Firestone Destination AT items. Our test unit had a bunch of options worth R25 000 fitted, including a wraparound bush bar, tonneau cover and the obligatory rubberised load bin. So, for work duties, and a no-frills approach, the NP300 is hard to knock. 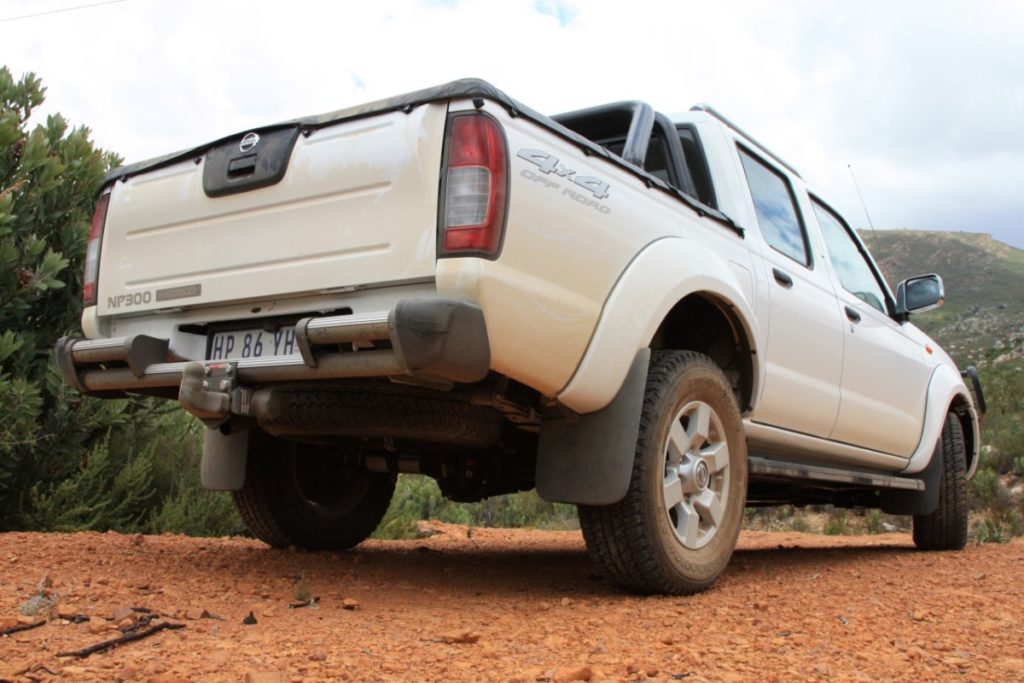 Ergonomics and aesthetics inside the NP300 are a direct throwback to a past era. On one hand, this is comforting; on the other, it shows how far the nuances of design have taken the humble bakkie into far more comfortable territory. I’ve mentioned the narrow rear doors. The driver’s seating is also strange, with the feet too high because of the shallow footwell. The seat itself is poorly bolstered, and it’s hard to find a comfortable perch. The steering wheel is completely unadorned except for a central hooter − not a switch in sight. Ditto the heating and ventilation controls, which rely on sliders and simple graphics unchanged since the Eighties. No drop-down menus and deep electronic mysteries here.

The only nod to the 21st Century is an add-on head unit with navigation, Bluetooth capability, and a link to a reversing camera. It’s a rather small touch screen, it has some quirks (you can’t operate the radio and navigation at the same time), but it’s there.

In fact, that complete lack of gimmickry is part of the appeal. This is a workhorse. You don’t want complications, and more to go wrong. It even has a proper handbrake (you pull the lever), and a proper “kort stokkie” to engage high- and low-range on the transfer case. Hallelujah.

Apparently, the more recent drivetrain upgrade to the NP300 is the addition of the 2.5-litre turbodiesel which did duty in the previous Navara. This is a 98kW/304Nm unit which is supposed to deliver under 9.0 litres/100km on the fuel front, but achieved closer to 10l/100km. 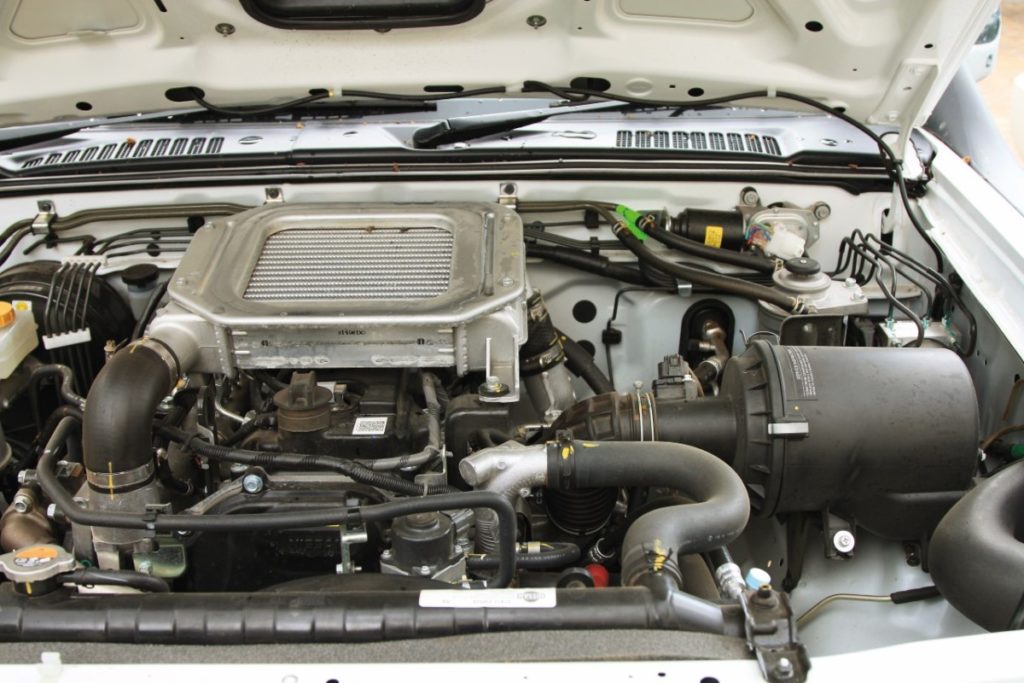 It is mated to a standard five-speed manual gearbox, which is surprisingly feelsome to use: crisp changes, positive action − all the good stuff, just short on ratios. The unit I tested had just 1500km on the odo. The engine was tight, and I found it to be strong and tractable in the mid-range − but rather noisy, too: lugging its way through the gears with an irksome grumble until it was properly spooled up and at cruising speed. I assumed it would loosen up, but also decided that Nissan needs to do some work on improving sound deadening. The vehicle is noisy at almost any speed, and even on decent tar roads topped out at a thrashy smidgen over the speed limit. Time will tell. I did like having the engine breathe through an old-school and effective Donaldson air filter – proper commercial fare, great for fleet owners.

As to handling, this is clearly a bakkie. Perfectly at home at slow speeds, and decently damped on 245/70 R16 tyres with some give and able to handle big bumps without any hitch. It is also easy to turn with fairly light but not over-assisted steering, but the proverbial brick on the highway.

I have to say that the NP300 proved a superb performer during the mild off-roading tests I threw at it. Fast gravel roads reminded one of older vehicles with the lack of intrusive traction control: there is none. But it felt very composed and solid on the corrugations. Perhaps the engineers have got the torsion beam front suspension just right, and it co-ordinates well with the rear leaf spring rates for the loads I was using. 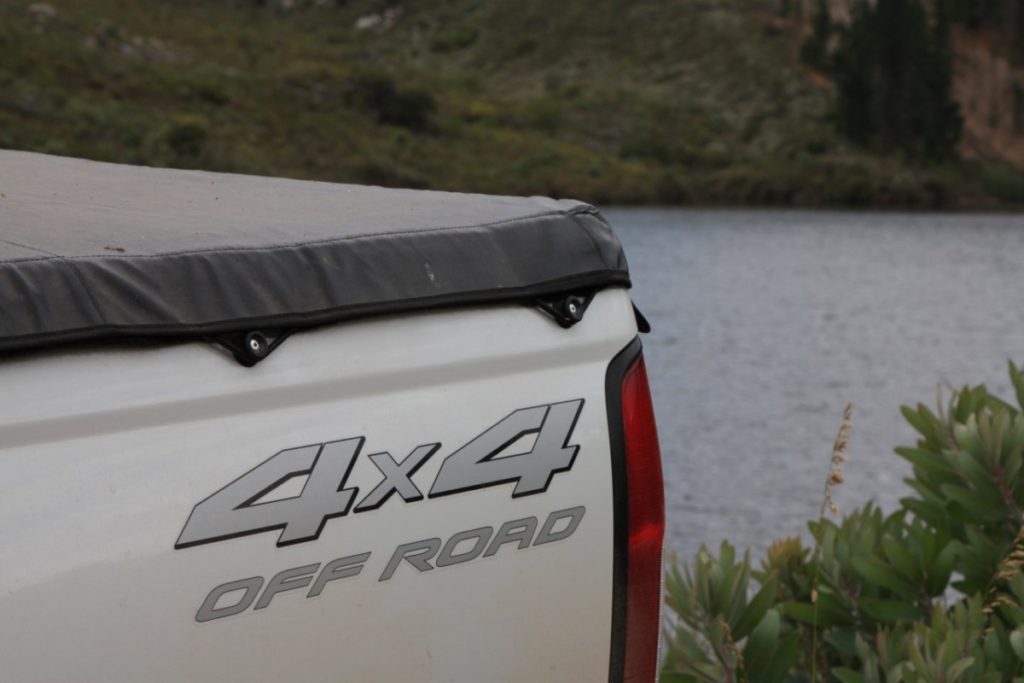 It has a good step-down transfer case ratio, and a decent approach angle, so it never felt challenged by a few hill climbs and rocky steps. Ground clearance is 240mm, which proves sufficient, with decent bash plates for when it is not.

The transfer case lever is pulled back for high range, and pushed in to enable a pull further down, for low. It worked every time, engaging and disengaging without any problem. Push-button systems cannot claim the same ease of use.

The limited-slip diff, contrary to many out there, works a treat: it locks up rapidly, making forward progress almost seamless on axle twisters.

Certainly, in this environment, the NP300 felt strong, and able to handle years of such challenges without fuss.

Back in 2002, SA4x4 said that the NP300 represented a “giant leap for Nissan”, calling it a “bakkie which has distinct SUV looks… that is very rugged yet at the same time modern and stylish and bound to appeal to a younger, more trendy market.”

The team were testing the 3000 TD model (105kW/314Nm) which, back then, offered “fantastic cruising ability”, adding that the low-revving engine and masses of torque meant that “low- speed work is handled with absolute ease”.

Not much has changed on the off-road ability front, except that the fashion market has moved on, what were considered “supportive bucket seats” no longer fit the description, and the combination of ABS and dual front/passenger airbags is no longer enough to guarantee a safety rating. Would you buy one for the family, as a leisure vehicle? No, I would look for a more modern bakkie close to the NP300’s price point. Where it does have a place, is as a work vehicle destined for hard, slow-going in a fleet environment where reliability, simple functions and proven technology earn the points.